Oceania is a geographical (and geopolitical) region consisting of numerous countries and territories—mostly islands—in the Pacific Ocean. The exact scope of Oceania varies—some descriptions include East Timor, Australia, and New Zealand; other versions exclude them. The primary use of the term "Oceania" is to describe a continental region (like Europe or Africa) that lies between Asia and the Americas, with Australia as the major land mass. The name "Oceania" is used, rather than "Australia," because unlike the other continental groupings, it is the ocean rather than the continent that links the nations together.

Oceania is the smallest continental grouping in land area and the second smallest, after Antarctica, in population. 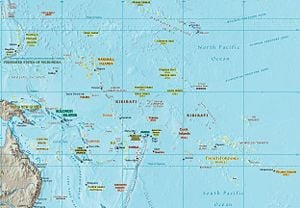 Oceania was divided into Micronesia, Melanesia, and Polynesia by the French explorer Jules Dumont d'Urville in 1831. This subdivision is no longer recognized as correct by most geographers and scientists, who prefer to divide Oceania into Near Oceania and Remote Oceania; it is still the most popular subdivision, though.

Most of Oceania consists of small island nations. Australia is the only continental country, and Papua New Guinea and East Timor are the only countries with land borders, both with Indonesia.

The nations of Oceania have varying degrees of independence from their colonial powers and have negotiated a wide range of constitutional arrangements to suit their circumstances. The following list contains the countries and territories that are classified as part of Oceania by UNESCO; other countries are sometimes considered part of Oceania (see Other Interpretations below).

Australia is sometimes not included in Oceania, although a term like the "Pacific Islands" would normally be used to describe Oceania without Australia. Hawaii and the United States territories with no indigenous population in the North Pacific are sometimes included, but are normally grouped with the United States in North America. Hawaiians are a Polynesian race. Easter Island is a Polynesian island in the eastern Pacific Ocean, part of the territory of Chile, and is sometimes included in Oceania. On rare occasions, the term may be stretched even further to include other Pacific Ocean island groups such as the Aleutian Islands.

Oceania is one of eight terrestrial ecozones, which constitute the major ecological regions of the planet. The Oceania ecozone includes all of Micronesia, Fiji, and all of Polynesia except New Zealand. New Zealand, along with New Guinea and nearby islands, Australia, the Solomon Islands, Vanuatu, and New Caledonia constitute the separate Australasia ecozone.

Oceania is the smallest in area of any of the ecozones, and the youngest, geologically. Other ecozones include old continental land masses or fragments of continents, but Oceania is composed mostly of island groups that arose from the sea, as a result of hotspot volcanism, or as island arcs pushed upward by the collision and subduction of tectonic plates. The islands range from tiny coral atolls to large mountainous islands, like Hawaii and Fiji.

Since the islands of Oceania were never connected by land to a continent, the flora and fauna of the islands originally reached them from across the ocean. Once they reached the islands, the ancestors of Oceania's present flora and fauna adapted to life on the islands. Larger islands with diverse ecological niches encouraged floral and faunal adaptive radiation, whereby multiple species evolved from a common ancestor, each species adapted to a different ecological niche; the various species of Hawaiian honeycreepers (family Drepanididae) are a classic example. Other adaptations to island ecologies include giantism, dwarfism, and, among birds, loss of flight. Oceania has a number of endemic species; Hawaii, in particular, is considered a global “center of endemism,” with its forest ecoregions having one of the highest percentages of endemic plants in the world.

Land plants dispersed by several different means. Many plants, mostly ferns and mosses but also some flowering plants, disperse on the wind, relying on tiny spores or feathery seeds that can remain airborne over long distances. Other plants, notably coconut palms and mangroves, produce seeds that can float in saltwater over long distances, eventually washing up on distant beaches. Birds are also an important means of dispersal; some plants produce sticky seeds that are carried on the feet or feathers of birds, and many plants produce fruits filled with seeds that can pass through the digestive tracts of birds. Botanists generally agree that much of the flora of Oceania is derived from the Malesian Flora of the Malay Peninsula, Indonesia, the Philippines, and New Guinea, with some plants from Australasia and a few from the Americas, particularly in Hawaii. Metrosideros, Pandanus, and Coco are tree genera with a fairly ubiquitous distribution across Oceania.

Dispersal across the ocean is difficult for most land animals, and Oceania has relatively few indigenous land animals compared to other ecozones. Certain types of animals that are ecologically important on the continental ecozones, like large land predators and grazing mammals, were entirely absent from the islands of Oceania until humans brought them. Birds are relatively common, including many sea birds and some species of land birds whose ancestors may have been blown out to sea by storms. Some birds evolved into flightless species after their ancestors arrived, including several species of rails. A number of islands have indigenous lizards, including geckoes and skinks, whose ancestors probably arrived on floating rafts of vegetation washed out to sea by storms. With the exception of bats, which live on most of the island groups, there are few if any indigenous mammal species in Oceania. Several species, however, have been introduced by humans: the first Malayo-Polynesian settlers brought pigs, dogs, and, inadvertently, rats to the islands. European settlers brought other animals, including cats, mongooses, sheep, goats, and the Norway rat.

These and other introduced species, in addition to overhunting and deforestation, have dramatically altered the ecology of many of Oceania's islands, pushing many species to extinction or near-extinction. The absence of predator species caused many bird species to become “naïve,” losing the instinct to flee from predators, and to lay their eggs on the ground, which makes them vulnerable to introduced predators like cats, dogs, mongooses, and rats. The arrival of humans on these island groups often resulted in disruption of the indigenous ecosystems and waves of species extinctions. Easter Island, the easternmost island in Polynesia, shows evidence of a human-caused ecosystem collapse several hundred years ago, which then caused the human population to implode. The island, once lushly forested, is now mostly windswept grasslands. More recently, Guam's native bird and lizard species were decimated by the introduction of the brown snake, Boiga irregularis, in the 1940s.

The economy of Oceania is comprised of more than 14 separate countries and their associated economies. The region has approximately 35,834,670 inhabitants who are spread among 30,000 islands in the South Pacific bordered by Asia and the Americas. Oceania has a diverse mix of economies from the highly developed and globally competitive financial markets of Australia (1st) and New Zealand (2nd), boasting parity with much of Western Europe, to the much less developed economies that belong to many of their island neighbors. 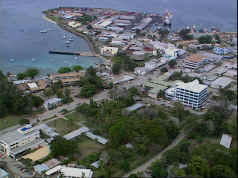 Honiara is the capital of the Solomon Islands.

Many of the smaller Pacific nations rely on trade with Australia, New Zealand, and the United States for exporting goods and for accessing other products.

The overwhelming majority of people in the Pacific (not including Australia and New Zealand) work in the primary sector. Many nations are still quintessentially agricultural; for example, 80 percent of the population of Vanuatu and 70 percent of the population of Fiji work in agriculture. The main produce from the Pacific is copra or coconut, but timber, beef, palm oil, cocoa, sugar, and ginger are also commonly grown across the tropics of the Pacific. Old growth logging is exploited on larger islands, including the Solomons and Papua New Guinea.

Fishing provides a major industry for many of the smaller nations in the Pacific, and the sale of fishing licenses can bring considerable income. However, many fishing areas are exploited by other larger countries, namely Japan.

Natural resources, such as lead, zinc, nickel, and gold, are mined across the west of the region, in the Solomon Islands and Australia. The manufacturing of clothing is a major industry in some parts of the Pacific, especially Fiji, although this is decreasing. Very little of the economy is in the area of investing and banking, save in the larger countries of Australia and New Zealand.

Recently, tourism has become a large source of income for many in the Pacific; tourists come from Australia, New Zealand, Japan, the United Kingdom, and the United States. Fiji currently draws almost half a million tourists each year; more than a quarter from Australia. This contributes US$300 million to Fiji's economy.

Aside from tourism, many places in the Pacific still rely on foreign aid for development. In the Solomon Islands, 50 percent of government spending is paid for by international donors; namely Australia, New Zealand, the European Union, Japan, and the Republic of China (Taiwan).

As the world's regions become increasingly interlinked to form trade blocs, Oceania's future could entail either increased unity or separatism. The outcome or resolutions to issues such as global warming, the Kyoto Agreement, and the subsequent potential of carbon trading could increase the region's viability and lead it to become more centralized. Greater unity, and therefore sustained prosperity, among Oceanian countries could be achieved through increased cooperation between the nation states economically, politically, and socially. The implementation of these factors could provide the region with a similar framework to the European Union in its most fundamental form. The formation of a common currency in the South Pacific, similar to that in Europe, may be the first step in this direction.

A panorama of Sydney, Australia's most populous city and Oceania's only World City.

The demographic table below shows the subregions and countries of geopolitical Oceania, categorized according to the scheme for geographic subregions used by the United Nations.[1]