A goat is a member of the genus Capra of the bovid (Bovidae) family of even-toed ungulates, or hoofed mammals. There are several species of goats, all of them native to Asia, Europe, or northern Africa.

The domestic goat is descended from the wild goat, Capra aegagrus, and is sometimes considered a subspecies, C. aegagrus hircus, and sometimes a distinct species, C. hircus. It was one of the first animals domesticated by humans and remains an important domesticated animal today.

Goats provide numerous benefits to humans, including food (milk, meat, cheese), fiber and skin for clothing, brush and weed control, and as symbols in religion, folklore, and mythology. While the domestication of goats has been a tremendous benefit to humanity, poor management of goats has led to overgrazing of land and desertification in various regions. Properly managed goat herds can serve a valuable purpose in controlling weeds and in reducing excess undergrowth in forested areas vulnerable to fires.

A male goat is called a buck or billy, and a female is called a doe or nanny. Young goats are called kids.

The Rocky Mountain goat, Oreamnos americanus, of North America is not a true goat; although it, like sheep, the musk ox, the chamois, and other members of the goat-antelope subfamily (Caprinae), are closely related to the goats.

Goats naturally live in rugged mountain or desert habitats. They are strong and skillful climbers and jumpers.

Like other bovids, goats have a digestive system that enables them to survive on rough, low-quality plant material such as leaves and grasses. Goats can eat a wide variety of foods.

Goats mostly live in groups ranging in size from 5 to 100 or so animals. Sometimes adult males live alone. The groups tend to keep moving, which helps them find food in their sparse habitats.

Goats are thought to be more intelligent than most other hoofed animals and seem to have a natural curiosity. They sometimes climb up into trees to feed on the leaves (Nowak 1983; Voelker 1986).

Goats give birth to one or two young after a gestation period of between 150 and 180 days, depending on the species. Like the young of most other bovids, newborn goats can stand and follow their mothers almost as soon as they are born. The milk of goats is very rich and young goats grow rapidly. Mother goats are very protective of their young and will fight to defend them (Nowak 1983). 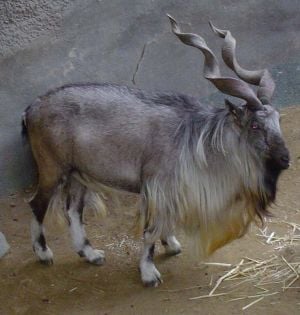 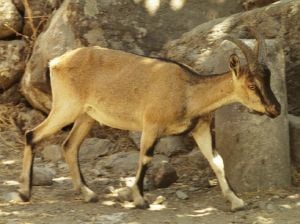 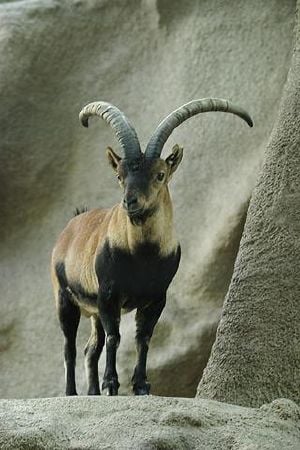 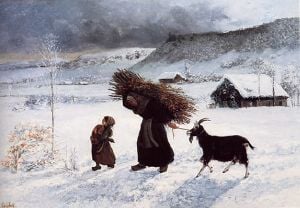 Goats were one of the first animals domesticated by humans. This seems to have taken place first in the Middle East, perhaps as long as 10,000 years ago (the same time that sheep were also being domesticated). It has been suggested that the goats' natural curiosity and search for new food sources led them to associate with human settlements (Budlansky 1992; Clutton-Brock 1999).

Keeping goats proved to be a valuable resource for early communities. They provided meat and milk, and their hair was used as fiber for clothing. The skin and the bones were also used. Historically, goat hide has been used for water and wine bottles, in both traveling and transporting wine for sale. It has also been used to produce parchment, which was the most common material used for writing in Europe until the invention of the printing press. 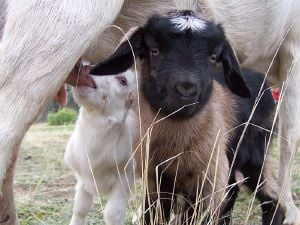 Domestic goats were generally kept in herds that wandered on hills or other grazing areas, often tended by goatherds who were frequently children or adolescents. These methods of herding are still utilized today. Goats can survive in difficult conditions. They also prefer different food than sheep and cattle, which are primarily grazers while goats are browsers, like deer, eating mostly leaves and leafy plants. Goats are better at fighting off predators than sheep and historically were kept sometimes with flocks of sheep to help defend the sheep.

Over time, goat keeping spread over most of Asia, Europe, and Africa. In parts of Africa and Asia, large herds of goats were maintained and land was often overgrazed. This has contributed to the expansion of deserts over large areas of these continents.

The Spanish and Portuguese brought goats to North and South America, and the English brought goats to Australia and New Zealand. Goats were also kept aboard ships to provide milk and meat on long voyages. Some of them were released by sailors on islands so that they could be hunted when the sailors returned. This has given rise to feral goat populations, which have caused much environmental damage on many islands around the world. Feral goats also exist on continents, but are not such an environmental problem there since their numbers are controlled by predators (ISSG 2007; OSU 1996).

Goats have continued to be an important domestic animal to the present day. The total number of domestic goats in the world is hard to estimate. China and India have the largest goat populations, over 100 million each, with most of them being raised for meat (Miller 1998). 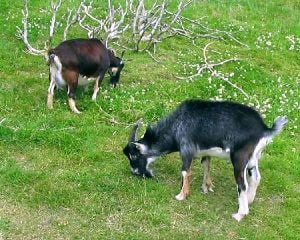 Many farmers use inexpensive (i.e. not purebred) goats for brush control, leading to the use of the term "brush goats." (Brush goats are not a variety of goat, but rather a function they perform.) Because they prefer weeds (e.g. multiflora rose, thorns, small trees) to clover and grass, they are often used to keep fields clear for other animals. Their plant diet is extremely varied and includes some species that are toxic or detrimental to cattle and sheep. This makes them valuable for controlling noxious weeds and clearing brush and undergrowth. They will seldom eat soiled food or water unless facing starvation.

In efforts to reduce the environmental impact of human land use, some institutions, such as the NASA Ames Research Center in the heart of California's Silicon Valley, are turning to goats to reduce use of herbicides and mowing machines.

The taste of goat meat, called chevon, is said to be similar to veal or venison, depending on the age of the goat. It can be prepared in a variety of ways including stewed, baked, grilled, barbecued, minced, canned, or made into sausage. It is also healthier than mutton as it is lower in fat and cholesterol, comparable to chicken. It is popular in China, the Middle East, south Asia, Africa, Mexico, and northeastern Brazil. Saudi Arabia is the largest importer of goat meat (Miller 1998). It is not currently popular in Europe and the United States.

Some of the goat breeds bred for meat production are the Boer from South Africa, the Myotonic or Tennesse fainting goat from the United States, and the Kiko from New Zealand (OSU 1996). 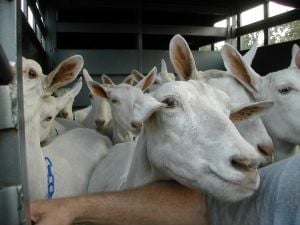 Goats' milk is more easily digested than cows' milk and is recommended for infants and people who have difficulty with cows' milk. The curd is much smaller and more digestible. Moreover it is naturally homogenized since it lacks the protein agglutinin. Furthermore, goats' milk contains less lactose, which means it will usually not trigger lactose intolerance in humans.

Goats' milk is also used to make popular cheeses such as Rocamadour and feta.

Goat breeds bred as milk producers include the French-Alpine from France, the La Mancha from the United States, and the Oberhasli, Saanen, and Toggenburg from Switzerland (OSU 1996). 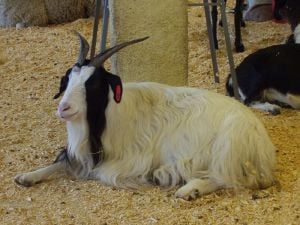 In south Asia, cashmere is called pashmina (Persian pashmina, meaning fine wool) and these goats are called pashmina goats (often mistaken as sheep). Since these goats actually belong to the upper Kashmir and Laddakh region, their wool came to be known as cashmere in the West. The pashmina shawls of Kashmir with their intricate embroidery are very famous.

The Angora breed produces long, curling, lustrous locks of mohair. The entire body of the goat is covered with mohair and there are no guard hairs. The locks can be six inches or more in length.

Goats do not have to be slaughtered to harvest the wool, which is instead sheared (cut from the body) in the case of Angora goats, or combed, in the case of Cashmere goats. The fiber is made into products such as sweaters. Both cashmere and mohair are warmer per ounce than sheep's wool and are not scratchy or itchy or as allergenic as wool sometimes is. Both fibers command a higher price than wool, compensating for the fact that there is less fiber per goat than there would be wool per sheep. 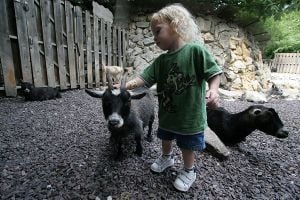 Goats are sometimes kept as pets, although they require more care than dogs and cats. The Pygmy or West African dwarf from West Africa has become popular as a pet (OSU 1996).

Goats in religion, folklore, and mythology

Goats are mentioned many times in the Bible. A goat was a considered a clean animal by Jewish dietary laws and was slaughtered for an honored guest. It was also acceptable for some kinds of sacrifices.

On Yom Kippur, the festival of the Day of Atonement, two goats were chosen and lots were drawn for them. One was sacrificed and the other allowed to escape into the wilderness, symbolically carrying with it the sins of the community. From this comes the word "scapegoat" (Moller 2007).

A leader or king was sometimes compared to a male goat leading the flock (Day 2007). In the New Testament, Jesus likened true followers of himself to sheep and false followers to goats.

Since its inception, Christianity has associated Satan with imagery of goats. The common medieval depiction of the devil was that of a goat-like face with horns and a small beard (a goatee). A common superstition in the Middle Ages was that goats whispered lewd sentences in the ears of the saints. The origin of this belief was probably the behavior of the buck in rut, the very epitome of lust.

The goat has had a lingering connection with Satanism and pagan religions, even into modern times. The pentagram, a symbol used by both Satanism and Wicca, is said to be shaped like a goat's head. The "Baphomet of Mendes" refers to a satanic goat-like figure from nineteenth-century occultism.

According to Norse mythology, the god of thunder, Thor, has a chariot that is pulled by several goats. At night when he sets up camp, Thor will eat the meat of the goats, but take care that all bones remain whole. Then he wraps the remains up, and in the morning, the goats will always come back to life to pull the chariot. When a mortal who is invited to share the meal breaks one of the goats' legs to suck the marrow, however, the animal's leg remains broken in the morning, and the mortal is forced to serve Thor as a servant to compensate for the damage.

The goat is one of the twelve-year cycle of animals that appear in the Chinese zodiac related to the Chinese calendar. Each animal is associated with certain personality traits; those born in a year of the goat are predicted to be shy, introverted, creative, and perfectionist. The Capricorn sign in the Western zodiac is usually depicted as a goat with a fish's tail.