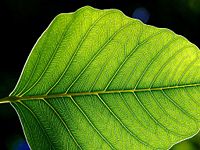 A leaf with laminar structure and pinnate venation 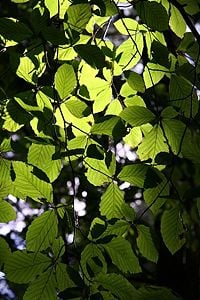 The leaves of a Beech tree

In botany, a leaf is an above-ground plant organ specialized for photosynthesis. For this purpose, a leaf is typically flat (laminar) and thin, to expose the chloroplast-containing cells (chlorenchyma tissue) to light over a broad area, and to allow light to penetrate fully into the tissues.

Leaves are also the sites in most plants where respiration (use of oxygen or the production of carbon dioxide), transpiration (passage of water vapor through the pore or membrane of the leaf), and guttation (oozing of water from the leaves resulting from root pressure) take place.

Just as the xylem and phloem of a plant's vascular system has been compared to the vein and arteries of the human circulatory system, leaves have been compared to human lungs, with both involved in the exchange of gases with the outside environment. In Western religions, this reflects the theological concept of humans as a microcosm of creation (Burns 2006).

Leaves can store food and water, and are modified in some plants for other purposes. The comparable structures of ferns are correctly referred to as fronds.

A structurally complete leaf of an angiosperm consists of a petiole (leaf stem), a lamina (leaf blade), and stipules (small processes located to either side of the base of the petiole). The point at which the petiole attaches to the stem is called the leaf axil. Not every species produces leaves with all of these structural parts. In some species, paired stipules are not obvious or are absent altogether; a petiole may be absent; or the blade may not be laminar (flattened). The tremendous variety shown in leaf structure (anatomy) from species to species is presented in detail below.

A leaf is considered to be a plant organ, typically consisting of the following tissues:

The epidermis is the outer multi-layered group of cells covering the leaf. It forms the boundary between the plant and the external world. The epidermis serves several functions: protection against water loss, regulation of gas exchange, secretion of metabolic compounds, and (in some species) absorption of water. Most leaves show dorsoventral anatomy: the upper (adaxial) and lower (abaxial) surfaces have somewhat different construction and may serve different functions.

The epidermis is usually transparent (epidermal cells lack chloroplasts) and coated on the outer side with a waxy cuticle that prevents water loss. The cuticle may be thinner on the lower epidermis than on the upper epidermis; and is thicker on leaves from dry climates as compared with those from wet climates.

The epidermis tissue includes several differentiated cell types: epidermal cells, guard cells, subsidiary cells, and epidermal hairs (trichomes). The epidermal cells are the most numerous, largest, and least specialized. These are typically more elongated in the leaves of monocots than in those of dicots.

The epidermis is covered with pores called stomata (singular, stoma), part of a stoma complex consisting of a pore surrounded on each side by chloroplast-containing guard cells, and two to four subsidiary cells that lack chloroplasts. The stoma complex regulates the exchange of gases and water vapor between the outside air and the interior of the leaf. Typically, the stomata are more numerous over the abaxial (lower) epidermis than the (adaxial) upper epidermis.

Trichomes or hairs grow out from the epidermis in many species.

Most of the interior of the leaf between the upper and lower layers of epidermis is a parenchyma (ground tissue) or chlorenchyma tissue called the mesophyll (middle leaf). This "assimilation tissue" is the primary location of photosynthesis in the plant. The products of photosynthesis are called assimilates.

In ferns and most flowering plants, the mesophyll is divided into two layers:

The pores or stomata of the epidermis open into substomatal chambers, connecting to air spaces between the spongy layer cells.

These two different layers of the mesophyll are absent in many aquatic and marsh plants. An epidermis and a mesophyll may be lacking. Instead, for their gaseous exchanges, they use a homogeneous aerenchyma (thin-walled cells separated by large gas-filled spaces). Their stomata are situated at the upper surface.

Leaves are normally green in color, which comes from chlorophyll found in plastids in the chlorenchyma cells. Plants that lack chlorophyll cannot photosynthesize.

Leaves in temperate, boreal, and seasonally dry zones may be seasonally deciduous (falling off or dying for the inclement season). This mechanism to shed leaves is called abscission. After the leaf is shed, a leaf scar develops on the twig. In cold autumns they sometimes turn yellow, bright orange or red as various accessory pigments (carotenoids and anthocyanins) are revealed when the tree responds to cold and reduced sunlight by curtailing chlorophyll production.

The veins are the vascular tissue of the leaf and are located in the spongy layer of the mesophyll. They are typical examples of pattern formation through ramification.

The veins are made up of:

The xylem typically lies over the phloem. Both are embedded in a dense parenchyma tissue (= ground tissue), called pith, with usually some structural collenchyma tissue present. 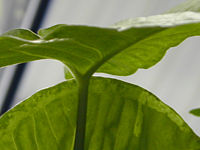 The leaves on this plant are arranged in pairs opposite one another, with successive pairs at right angles to each other ("decussate") along the red stem (note developing buds in the axils of these leaves)

External leaf characteristics (such as shape, margin, hairs, etc.) are important for identifying plant species, and botanists have developed a rich terminology for describing leaf characteristics. These structures are a part of what makes leaves determinant; they grow and achieve a specific pattern and shape, then stop. Other plant parts like stems or roots are non-determinant, and will continue to grow as long as they have the resources to do so.

Leaves may be classified in many different ways, and the type is usually characteristic of a species, although some species produce more than one type of leaf.

Arrangement on the stem

As a stem grows, leaves tend to appear arranged around the stem in a way that optimizes yield of light. In essence, leaves come off the stem in a spiral pattern, either clockwise or counterclockwise, with (depending upon the species) the same angle of divergence. There is a regularity in these angles and they follow the numbers in a Fibonacci sequence: 1/2, 2/3, 3/5, 5/8, 8/13, 13/21, 21/34, 34/55, 55/89. This series tends to a limit of 360° x 34/89 = 137.52 or 137° 30', an angle known mathematically as the "golden angle." In the series, the numerator gives the number of complete turns or gyres until the leaf arrives at the initial position. The denominator gives the number of leaves in the arrangement. This can be demonstrated by the following:

The fact that an arrangement of anything in nature can be described by a mathematical formula is not in itself mysterious. Mathematics is the science of discovering numerical relationships and applying formula to these relationships. The formulas themselves can provide clues to the underlying physiological processes that, in this case, determine where the next leaf bud will form in the elongating stem. However, we can more easily describe the arrangement of leaves using the following terms: 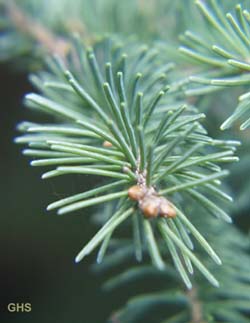 Divisions of the lamina (blade)

Two basic forms of leaves can be described considering the way the blade is divided. A simple leaf has an undivided blade. However, the leaf shape may be one of lobes, but the gaps between lobes do not reach to the main vein. A compound leaf has a fully subdivided blade, each leaflet of the blade separated along a main or secondary vein. Because each leaflet can appear to be a "simple leaf," it is important to recognize where the petiole occurs to identify a compound leaf. Compound leaves are a characteristic of some families of higher plants, such as the Fabaceae.

Characteristics of the petiole

In some Acacia species, such as the Koa Tree (Acacia koa), the petioles are expanded or broadened and function like leaf blades; these are called phyllodes. There may or may not be normal pinnate leaves at the tip of the phyllode.

Characteristics of the stipule

Venation (arrangement of the veins)

There are two subtypes of venation, craspedodromus (the major veins stretch up to the margin of the leaf) and camptodromous (major veins come close to the margin, but bend before they get to it). 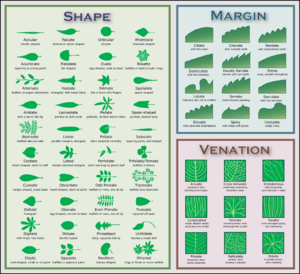 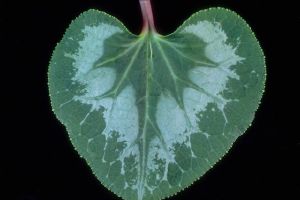 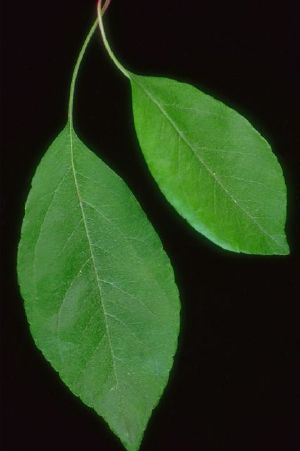 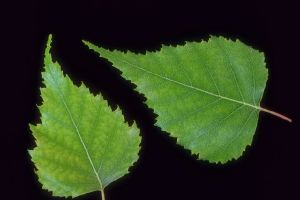 In botany, the following terms are used to describe the shape of plant leaves:

The leaf margin is characteristic for a genus and aids in determining the species.

Tip of the leaf 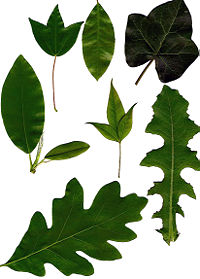 Base of the leaf

Surface of the leaf

The surface of a leaf can be described by several botanical terms:

Leaves can show several degrees of hairiness. The meaning of several of the following terms can overlap. 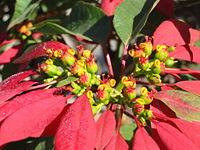 The leaves of Poinsettia have evolved a red pigmentation in order to attract insects and birds to the central flowers, an adaptive function normally served by petals.

In order to survive in a harsh environment, leaves can adapt in the following ways: