A fern, or pteridophyte, is any one of a group of plants classified in the Division Pteridophyta, formerly known as Filicophyta. A fern is a vascular plant that differs from the more primitive lycophytes in having true leaves (megaphylls) and from the more advanced seed plants (gymnosperms and angiosperms) in lacking seeds, and instead reproducing with spores.

There are an estimated 10-15,000 known species of ferns, classified in about 40 families (Swale 2000). There are also plants known as "fern allies" that are also vascular plants and reproduce via spores, but are not true ferns. Hassler and Swale (2001) compiled a list of 12,838 ferns and fern allies in three classes, 19 orders, 58 families, and 316 genera.

Ferns are among the oldest land plants, dating back to the Carboniferous period (359 to 299 million years ago), when they considered to have been the dominant type of vegetation. The fronds of some Carboniferous ferns are almost identical with those of living species. Reproduction via spores preceded the development of angiosperm reproduction.

Ferns range in size from some aquatic species a few centimeters high to some tree ferns that can grow more than 20 meters high with fronds over three meters.

Ferns are distributed throughout the world, including tropical, temperate, and Arctic environments, although most species are located in tropical regions. They tend to grow in shady, damp areas, but are also found on rocks and dry ground. Some species grow on trees. 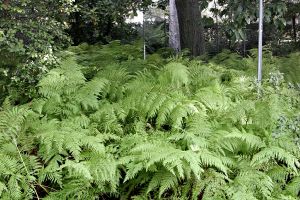 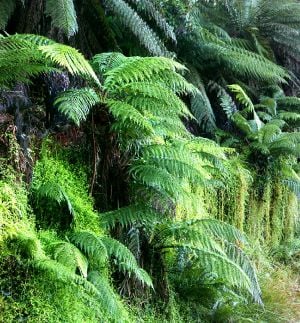 Like the sporophytes of seed plants, those of ferns consist of:

The gametophytes of ferns, however, are very different from those of seed plants. They typically consist of:

Like all vascular plants, ferns have a life cycle often referred to as alternation of generations, characterized by a diploid sporophytic and a haploid gametophytic phase. Unlike the gymnosperms and angiosperms, in ferns the gametophyte is a free-living organism. The life cycle of a typical fern is as follows:

Ferns have traditionally been grouped in the Class Filices, but modern classifications assign them their own division in the plant kingdom, called Pteridophyta.

Two related groups of plants, commonly known as ferns, are actually more distantly related to the main group of "true" ferns. These are the whisk ferns (Psilotophyta) and the adders-tongues, moonworts, and grape-ferns (Ophioglossophyta). The Ophioglossophytes were formerly considered true ferns and grouped in the Family Ophioglossaceae, but were subsequently found to be more distantly related. Some classification systems include the Psilopytes and Ophioglossophytes in Division Pteridophyta, while others assign them to separate divisions. Modern phylogeny indicates that the Ophioglossophytes, Psilotopytes, and true ferns together constitute a monophyletic group, descended from a common ancestor.

The true ferns may be subdivided into four main groups, or classes (or orders if the true ferns are considered as a class):

The last group includes most plants familiarly known as ferns. The Marattiopsida are a primitive group of tropical ferns with a large, fleshy rhizome, and are now thought to be a sibling taxon to the main group of ferns, the leptosporangiate ferns, which include the other three groups listed above. Modern research suggests that the Osmundopsida diverged first from the common ancestor of the leptosporangiate ferns, followed by the Gleichenopsida.

Fern ally is a general term covering a somewhat diverse group of vascular plants that are not flowering plants (angiosperms) and not true ferns. Like ferns, these plants reproduce by shedding spores to initiate an alternation of generations. There are three or four groups of plants considered to be fern allies. In various classification schemes, these may be grouped as classes or divisions within the plant kingdom. The more traditional classification scheme is as follows (here, the first three classes are the "fern allies"):

A more modern or newer classification scheme is:

Note that in either scheme, the basic subdivision of the fern allies is preserved, with the exception that the Ophioglossophyta (Ophioglossopsida), once thought to be true ferns, are now generally regarded by many to be a distinct group of fern allies.

Ferns are not of major, direct economic importance, with one possible exception. Ferns of the genus Azolla, which are very small, floating plants that do not look like ferns, called mosquito fern, are used as a biological fertilizer in the rice paddies of southeast Asia, taking advantage of their ability to fix nitrogen from the air into compounds that can then be used by other plants.

Other ferns with some economic significance include:

Ferns have additional value in various cultures in terms of use for food, fiber (stuffing pillows, etc.), and in building material (Croft 1999). Ferns also provide aesthetic value, whether from their beauty in the wild or there use in landscaping, crafts, paintings, and decorations. May (1978) listed 150 different uses of ferns and fern allies.

In some cases, ferns provide negative value, such as in their role as weeds in agriculture.

Several non-fern plants are called "ferns" and are sometimes popularly believed to be ferns in error. These include:

In addition, the book Where the Red Fern Grows has elicited many questions about the mythical "red fern" named in the book. There is no such known plant, although there has been speculation that the Oblique grape-fern, Sceptridium dissectum, could be referred to here, because it is known to appear on disturbed sites and its fronds may redden over the winter.