In biology, a spore is a reproductive structure that is adapted for dispersion and survival for extended periods of time in unfavorable conditions. Spores form part of the life cycles of many plants, algae, fungi, and some protozoans. They are typically unicellular and haploid, being produced by meiosis. Being units of asexual reproduction, spores do not combine with other spores, but directly form new haploid organisms. (See spore formation and life cycles below.)

In addition to being reproductive structures, the term spore may also refer to the dormant stage of some bacteria or archaea; however, these more correctly are known as endospores and are not truly spores in the sense discussed in this article. The term spore can also be loosely applied to some animal resting stages.

Spores' chief advantage is that, of all forms of progeny, spores require the least energy and materials to produce. In the case of spore-shedding vascular plants, such as ferns, wind distribution of very light spores provides great capacity for dispersal. Also, spores are less subject to animal predation than seeds because they contain almost no food reserve. However, they are more subject to fungal and bacterial infection.

Fungi that produce spores are known as sporogenous, and those that do not are asporogenous. 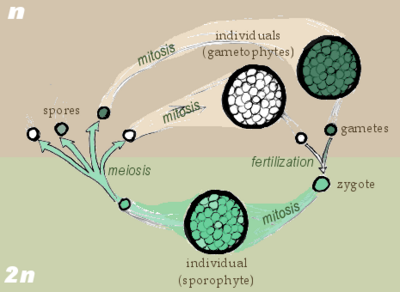 Spores contain DNA and can develop into new organisms after dispersal.

Once conditions are favorable, the haploid spore can develop into a new organism using mitotic division, producing a multicellular, haploid gametophyte—a structure, or phase of life, that contains only half of the total complement of chromosomes.

Eventually, the gametophyte will go on to produce gametes, which are mature reproductive or sex cell that are also haploid. Two gametes fuse to create a new sporophyte—an organism with a full complement of chromosomes.

This cycle is known as alternation of generations.

It is useful to contrast spores with gametes.

Spores are units of asexual reproduction. In asexual reproduction, an individual can reproduce without involvement with another individual, there is no fusion of gametes, and the new organism produced inherits all of its chromosomes from one parent and thus is a genetically-similar or identical copy of the parent. In the case of spores, there is no fusion of the spores, nor exchange of genetic material between organisms. Once conditions are favorable, spores can develop into new (haploid) organisms using mitotic division.

There can be spore formation (sporogenesis) without meiosis, such that the chromosome number of the spore cell is genetically identical to the haploid parent producing the spores. Haploid spores produced by mitosis (known as mitospores) are used by many fungi for asexual reproduction.

Example: Life cycle of a fern 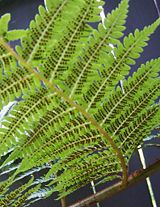 The underside of a Dicksonia Antarctica frond showing the sori, or spore-holding structures.

Like other vascular plants, ferns have a life cycle often referred to as alternation of generations, characterized by a diploid sporophytic and a haploid gametophytic phase. Unlike the gymnosperms and angiosperms, in ferns the gametophyte is a free-living organism. The life cycle of a typical fern is as follows:

A chief difference between spores and seeds in terms of their roles as dispersal units is that spores have very little stored food resources compared with seeds, and thus require more favorable conditions in order to successfully germinate. Spores, therefore, are more resistant to harsh conditions and require less energy to start mitosis. Spores are usually produced in large numbers to increase the chance of a spore surviving.

In common parlance, the difference between "spore" and "gamete" (both together called gonites) is that a spore will germinate and develop into a thallus of some sort, while a gamete needs to combine with another gamete before developing further. However, the terms are somewhat interchangeable when referring to gametes.

Spores can be classified in several manners.

Diaspores are dispersal units of fungi, mosses, ferns, fern allies, and some other plants.

In fungi, chlamydospores are thick-walled big resting spores; it is the life-stage that survives in unfavorable conditions, such as dry or hot seasons. In fungi, zygospores are spores (hypnozygotes) of zygomycetous fungi, creating by fusion of haploid hyphae of different mating types. That is, they are produced by sexual gametocystogamy and can give rise to a conidiophore ("zygosporangium") with asexual conidiospores.

By origin during life cycle

Meiospores are the product of meiosis (the critical cytogenetic stage of sexual reproduction), meaning that they are haploid, and will give rise to a haploid daughter cell(s) or a haploid individual. An example is the parent of gametophytes of the higher vascular plants (angiosperms and gymnosperms)—the microspores (give rise to pollen) and megaspores (give rise to ovules) found in flowers and cones; these plants accomplish dispersal by means of seeds.

Vascular plant spores are always haploid and vascular plants are either homosporous or heterosporous. Plants that are homosporous produce spores of the same size and type. Heterosporous plants, such as spikemosses, quillworts, and some aquatic ferns produce spores of two different sizes: the larger spore in effect functioning as a "female" spore and the smaller functioning as a "male."

Under high magnification, spores can be categorized as either monolete spores or trilete spores. In monolete spores, there is a single line on the spore indicating the axis on which the mother spore was split into four along a vertical axis. In trilete spores, all four spores share a common origin and are in contact with each other, so when they separate each spore shows three lines radiating from a center pole.