A spermatozoon or spermatozoan (pl. spermatozoa), from the ancient Greek σπερμα (seed) and ζων (alive), is more commonly known as a sperm or sperm cell. It is the haploid male gamete cell, meaning it is the reproductive cell containing a single set of chromosomes. A sperm fertilizes an ovum, which serves as the female haploid gamete. Together, the sperm cell and ovum form a zygote, or fertilized egg, which can then grow and develop into a new organism.

The production of sperm—over 200 million produced in a day in a human—and the process of locating and fertilizing an egg is itself a complex process, involving meiosis, mitosis, delayed maturation, various hormones and enzymes, sense detectors, sperm receptors, and other features. And this is only from the perspective of the sperm. Despite how remarkable is the development of such an intricate process in living organisms, sexual reproduction is a nearly universal aspect of life. Notably, in creating new life, both male and female parents contribute to the offspring. This reflects the universal biological principle of dual characteristics or polarity, and some religions hold that this further reflects the characteristics of the Supreme Being as a unified being of both masculinity and femininity.

Sperm cells were first observed by a student of Anton van Leeuwenhoek in 1677. Semen is a fluid that contains spermatozoa.

In humans, a sperm cell consists of a head, which is 5 µm by 3 µm, and a 50 µm long tail, or flagellum. The dense nucleus is covered by a vesicle called the acrosome, which contains enzymes that are crucial for fertilization. The sperm cell contains a minimum amount of cytoplasm. The midpiece, which is located between the head and tail of the sperm cell, contains centrioles, microtubules, and a mitochondrial spiral. These structures are used to aid in movement and fertilization.

During fertilization, the sperm's mitochondria are destroyed by the egg cell. Only the mother is able to provide the offspring's mitochondrial DNA. This plays an important fact in tracing maternal ancestry. However, it has been recently discovered that mitochondrial DNA may be recombinant, or a combination of genes not found together in either parent.

Spermatazoan streamlines are straight and parallel. The tail flagellates and propels the human sperm cell at about 1 to 3 mm per minute by rotating like a propeller. The Reynolds number associated with spermatozoa is in the order of 1E-2. The Reynolds number is a ratio of inertial to viscous forces and is used to determine whether flow will be laminar or turbulent. A small number indicates viscous forces are dominant and therefore laminar flow is present, meaning sperm cells exhibit smooth and constant fluid motion.

In marine invertebrates, the sperm cell is a flagellate cell consisting of a flagella, acrosome, and perforatorium. Such organisms practice external fertilization (Baccetti 1986).

The largest spermatozoa belongs to the fruit fly.

In humans, once a male reaches puberty, the period when the gonads (reproductive organs) mature in the early teen years, sperm cells are produced continuously throughout the rest of the male's lifetime (gonads are inactive after birth until puberty). Sperm production does diminish with age, but never completely ceases. Women, on the other hand, are born with all the eggs they will ever have. After approximately 50 years, their reproductive cycle ends during a period known as menopause.

Spermatozoa are all derived from germ cells, or the embryonic gonadal cells that produce gametes. Gametes are the reproductive cells that unite to form a new individual. In the testes (gonads) of a newborn boy, immature spermatogonia, which are germ cells, are present. Some of these spermatogonia continually duplicate themselves through the process of mitosis. Other spermatogonia undergo meiosis and eventually develop into sperm.

During the process of spermatogenesis, germ cells mature to become sperm cells. The first part of the process occurs in the seminiferous tubules of the male testes. It takes approximately 64 days. Final maturation of sperm cells occurs in the epididymus (hollow duct) over a 12-day period. In the seminiferous tubules, spermatogonia initially undergo meiosis to become primary spermatocytes. Then, in the first meiotic division, each primary spermatocyte divides into two secondary spermatocytes. Each of the two secondary spermatocytes divides into two spermatids during the second meiotic division. Spermatids are haploid cells and contain 23 single chromosomes. The spermatids then mature into sperm as they lose most of their cytoplasm and develop a flagellated tail. Also, the nucleus' chromatin condenses into a dense structure as a vesicle called the acrosome covers most of the surface of the nucleus. Although sperm cells have been formed at this point in spermatogenesis, the sperm cells are not yet mature or able to swim freely. The final maturation process takes place once the sperm cells have moved into the epididymis, where they mature over the 12 days or so.

Once the process of spermatogenesis is complete for one primary spermatocyte, the end result is the creation of four sperm cells. The average life span of sperm is between four to six days.

The entire process, from spermatogonium to mobile and functional sperm, takes approximately 76 days. However, at any one time different cells may be in a different stage of the development process. This staggering of developmental stages allows sperm cell production to stay steady at about 200 million sperm per day (Silverthorn 2004). Although this number may seem excessively large, it is about the number of sperm released in a single ejaculation.

Several hormones are required to initiate and maintain gametogenesis, which is the formation of gametes. Without gametogenesis, sperm cells could never form. Follicle stimulating hormone, or FSH, from the anterior pituitary, along with sex hormones, are required for the gametogensis process. The hypothalamus, a part of the brain, controls the release of FSH through gonadotropin releasing hormone, or GnRH.

While in the seminiferous tubules, various cells aid sperm development. Sertoli cells, also called sustentacular cells, are one such type of cell. They function to regulate sperm development by providing nourishment for the spermatogonia. They manufacture various proteins that span from hormones to growth factors to enzymes.

Fertilization and the acrosomal reaction 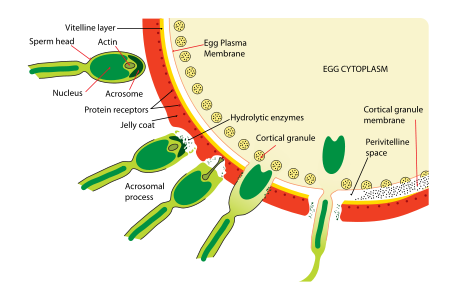 The main function of sperm is to fertilize an egg to form a zygote. In order to do so, a sperm cell must locate the egg, penetrate its protective layerings, and then finally fuse its genetic material with the egg. The process through which a sperm cell breaks through the barriers of the egg is called the acrosomal process.

Once sperm has entered the female's vagina or cloaca, the sperm begins its task of locating the egg. Sperm do not swim randomly; they use various clues and factors to help reach the egg.

In humans, apparently, the female reproductive tract becomes warmer as the Fallopian tubes are neared. Current research at Harvard University has shown that sperm swim from colder to warmer regions (Flam 2006). Also, research has indicated that sperm swim towards increasing concentration gradients of a synthetic compound called bourgeonal (Flam 2006). Whether the egg or female body releases the chemoattractant is unclear as of now. But studies have been convincing to show that sperm can smell. Essentially, sperm smell their way from the vagina to the to the location of the egg in the distal parts of the female's Fallopian tubes (Flam 2006). Once the sperm meets the egg, fertilization can occur.

For successful fertilization to take place, a sperm must first penetrate various layers surrounding the egg. The outer layer of the egg is the loosely connected granulosa cells. These cells make up what is known as the corona radiata, and they develop with the egg to support its growth and then serve to provide a physical barrier to fertilization. Once past this outer layer, a sperm has to surpass the protective glycoprotein coat of the zona pellucida. In order to get past these two major barriers, however, a sperm must release its powerful enzymes contained in the acrosome of the sperm head. The release of these enzymes begins the acrosomal process.

Once a sperm nears an ovum, capacitation and hyperactivity occur. The sperm begins to swim more rapidly and forcefully. A recent discovery links hyperactivity to a sudden influx of calcium ions into the tail of the sperm. The flagellum contains ion channels formed by a protein called CatSper. These ion channels are selective and allow only calcium ions to flow in. Hence, the opening of CatSper channels leads to the influx of calcium. The sudden rise in calcium levels in the tail causes increased activity in the flagellum, propelling the sperm more forcefully through the viscous environment of the female uterus. Sperm hyperactivity is necessary for breaking through the physical barriers that protect the egg from fertilization. Once a sperm is capacitated and reaches the egg, enzymes are released from the acrosome in order to dissolve cell junctions and the zona pellucida coat (Carlson 2003).

After the sperm has wiggled its way toward the egg, one of the proteins that makes up the zona pellucida binds to a partner molecule receptor on the sperm. The zona pellucida consists of three or four glycoproteins, one of them being ZP3, or zona pellucida glycoprotein 3. It is the sperm receptor on the egg surface and functions in the initial binding and induction of the sperm acrosomal reaction. This lock-and-key type mechanism is species-specific and prevents the sperm and egg of different species from fusing. Once the sperm has bound to ZP3, the fused section of the membranes opens and the nucleus of the sperm is transferred to the egg cytoplasm. Changes in the egg cell follow and help to prevent polyspermy, or the fertilization of the egg by more than one sperm.

Problems with sperm production, motility, or count may lead to infertility. In immotile cilia syndrome, which is an autosomal recessive defect, immobile or poor motility of the cilia of the airways and sperm result. Consequently, an egg cannot be fertilized and male infertility results.

A third pathology, impairment of sperm transport, may lead to infertility as well. It can be caused by a variety of factors such as obstruction of the epididymis or vas deferens and cystic fibrosis (Wilson 1991).