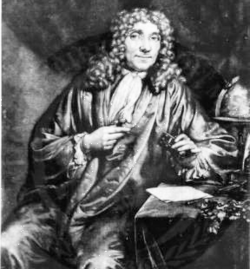 Thonius Philips van Leeuwenhoek, better known as Anton[1] van Leeuwenhoek, (October 24, 1632 - August 30, 1723) was a Dutch tradesman and scientist from Delft, Netherlands. He is known as "the Father of Microbiology." van Leeuwenhoek is best known for his contribution to the improvement of the microscope and for his contributions towards the establishment of microbiology. Using his handcrafted microscopes, van Leeuwenhoek was the first to observe and describe single celled organisms that he first referred to as animalcules, and which we now refer to as microorganisms. He was also the first to record microscopic observations of bacteria, muscle fibers, microscopic nematodes and rotifers, spermatozoa, blood cells, and blood flow in capillaries (small blood vessels).

Van Leeuwenhoek's early discoveries in the field of microbiology can be likened to Galileo's early discoveries in the field of astronomy. Both men used the newly improved optical technologies of their day to make major discoveries that entirely overturned traditional beliefs and theories in their respective fields, and both men were initially met with strong skepticism and resistance to the inevitable conclusions to which their discoveries led. Ultimately, Leeuwenhoek was more fortunate than Galileo in that his discoveries were eventually widely accepted and applauded in his lifetime, whereas Galileo's were not. In addition, van Leeuwenhoek's main opposition was from the scientific community, not the religious community, because Holland was freer of religious persecution than many other European nations at the time. Galileo, for example, faced strong religious persecution.

With no advanced education or fortune and coming from a family of tradesmen (his father was a basketmaker), and also being limited to the Dutch language, van Leeuwenhoek was an unlikely scientist (Ford 1991). Yet, he made many of the most important discoveries in microbiology.

During his lifetime van Leeuwenhoek ground over five hundred optical lenses. He also created over four hundred different types of microscopes, nine of which still exist today. His microscopes were made of silver or copper metal frames holding hand-ground lenses. Those that survived the years are able to magnify up to 270 times. It is suspected, though, that van Leeuwenhoek possessed some microscopes that could magnify up to five hundred times.

Early involvement with the microscope

In 1648 in Amsterdam, van Leeuwenhoek saw a simple microscope, a magnifying glass mounted on a small stand used by textile merchants capable of magnifying to a power of three. He was 14 years old when he soon acquired one for his own use. In 1654 he left Amsterdam and moved back to Delft, and started his own lucrative drapery business there. In 1660 van Leeuwenhoek was appointed chamberlain of the Lord Regents of Delft. It is believed that soon after 1665, he read a book by Robert Hooke, titled Micrographia, which dealt with Hooke's observations with the compound microscope. His reading of Hooke's book is believed to have roused an interest in van Leeuwenhoek to use his microscopes for the purpose of investigating the natural world beyond the mere quality of the fabrics he sold. In 1669, he obtained an academic degree in geography, leading to his later appointment as geographer in 1679.

Van Leeuwenhoek's interest in microscopy steadily grew until he was spending most of his nights and free time grinding his own lenses, improving the quality of his microscopes, and studying everything he could beneath them. Although he is sometimes erroneously referred to as "the inventor of the microscope," compound microscopes (with two lenses mounted together) had existed since 1595. However, they were very crude because the technology used made it difficult to build them properly. Van Leeuwenhoek's genius was developing his skill to grind single lenses very precisely. It is likely that his microscopes were powerful magnifying glasses, not compound microscopes.

Van Leeuwenhoek also carefully documented many of his observations. He soon developed what is believed to have been the highest-powered microscopes of his day, magnifying up to 500 times. He retained some of his methods of microscope construction in secret, “which I only keep for myself.” While scientists agree that many of his observations would have required a 500-power microscope, exactly how he constructed such a microscope remains unknown. Van Leeuwenhoek's microscopes were small, generally only about two inches long and one inch across. The microscope held at the Utrecht museum has a magnification factor of about 275x with a resolution of about one micron.

After his important improvements to the microscope, and his thorough use of it, he was introduced via correspondence to the English Royal Society by the famous Dutch physician Regnier de Graaf. He soon began to send copies of his recorded microscopic observations to the Royal Society. In 1673, the Royal Society published his earliest observations in its journal, Philosophical Transactions. Among these published observations were Van Leeuwenhoek's accounts of “bee mouthparts and stings.”

Despite the initial success of van Leeuwenhoek's relationship with the Royal Society, this relationship was soon severely strained. In 1676 his credibility was questioned when he sent the Royal Society a copy of his first observations of microscopic life forms. In an experiment with pepper (to see if their "heat" was caused by spikes), he put peppercorns in water to soften for three weeks. He then discovered “wee animals” in the water—so small that if one hundred were laid end to end “they could not reach to the length of a grain of coarse sand.” Heretofore, the existence of such life forms was entirely unknown. Thus, even with his established reputation with the Royal Society as a reliable observer, his observations of microscopic life were initially met with skepticism. Nevertheless, van Leeuwenhoek remained undaunted and continued to insist to the Royal Society that his observations were accurate, true, and valid.

Van Leeuwenhoek's vindication resulted in his appointment as a member of the Royal Society in that year. After his appointment to the Society, he wrote approximately 560 letters to the Society and other scientific institutions over a period of 50 years. These letters dealt with the subjects he had investigated. His letters were written in Dutch and translated into English or Latin and published in Philosophical Transactions of the Royal Society."

Van Leeuwenhoek's many discoveries include:

Van Leeuwenhoek was a contemporary of that other famous Delft citizen, painter Johannes Vermeer, who was baptized just four days earlier. It has been suggested that van Leeuwenhoek is the man portrayed in two of Vermeer's paintings of the late 1660s, The astronomer and The geographer. Because they were both relatively important men in a city with only 24,000 inhabitants, it is possible that they were at least acquaintances. Also, it is known that van Leeuwenhoek acted as the executor when the painter died in 1675. However, others argue that there appears to be little physical similarity between van Leeuwenhoek and the person(s) in the paintings.

^ The given name Anton can also be found written as Anthon, Anthony, Antonie, Antony, Anthonie, Antoni, Antonio, and Anthoni.