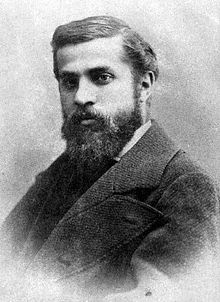 Antoni Gaudí i Cornet (June 25, 1852 – June 12, 1926) – sometimes referred to by the Spanish translation of his name, Antonio Gaudí – was an architect from Catalonia, Spain who belonged to the Modernism (Art Nouveau) movement and was famous for his unique style and highly individualistic designs. Gaudí, throughout his life, was fascinated by nature. He studied nature's angles and curves and incorporated them into his designs. Instead of relying on geometric shapes, he mimicked the way trees and humans grow and stand upright. The hyperbolic and parabolic lines he borrowed from nature and used in his work were easily reinforced by steel rods and allowed his designs to resemble elements from the environment. It has been hypothesized that exposure to nature at an early age helped to form two of his greatest qualities: observation and the analysis of nature.

Gaudi believed that different architectural styles did not depend on aesthetic ideas alone, but on the social and political environments, so he widely studied philosophy, history, economics and aesthetics while he was a college student.

Gaudí was born in the area of Tarragona, Spain, in 1852. (While many believe his birthplace to be the town of Reus, others claim it was in fact Riudoms.)[1] It is certain that he was baptized in Reus a day after his birth. The artist's parents, Francesc Gaudí Serra and Antònia Cornet Bertran, both came from families of metalsmiths.

The youngest of five, Gaudí was too lame to play with friends his age because of rheumatism. Some believe he only had arthritis in his hands and could, in fact, take walks. Because he was in considerable pain, he was rarely able to walk on foot and was forced to ride a donkey when he wanted to venture from his home. The fact that he remained close to home allowed him substantial free time to inspect nature and its design.[1] It has been hypothesized that this exposure to nature at an early age began to hone two of his greatest qualities: observation and the analysis of nature.[2] At age 11 he entered the Collegi de les Escoles Píes (Pious School) in Reus. It seems that his intellectual development was substantial, since he achieved very good grades in geometry. His "religiousness" probably began there; every Saturday evening, the Oficio del Parvo de la Virgen was recited. His academic transcript is still kept there. He was clearly not a genius in school, but with the years of study he made notable improvements, eventually earning some "excellent" grades.

Gaudi recalls that at Escola Pies he learned the "value of the divine history of the salvation of man through Christ incarnate, given to the world by the Virgin Mary." Later, these ideas helped to influence the design of the Sagrada Familia. To the school, he contributed drawings to illustrate the handwritten weekly school newsletter and designed scenes for the school theatre. He made physical changes that allowed him to take field trips, on which he greatly enjoyed observing new landscapes.

In 1868 Gaudí moved to Barcelona to study architecture. After completing three elective courses at the Provincial School of Architecture, and two courses in the College of Science, he was able to enter the Escuela Técnica Superior de Arquitectura (Upper Technical School of Architecture) in 1873. Gaudi believed that different architectural styles did not depend on aesthetic ideas but on the social and political atmosphere, so he made sure to attend classes in philosophy, history, economics and aesthetics.

Antoni was not an outstanding student, but he was good enough to obtain a solid education of elementary architectural knowledge. The trial drawings and projects courses were the only two in which he received "excellent" grades. Since he never married, he was always accompanied, even during his architectural studies, by his father and his niece, Rosa Egea. His mother died shortly after Gaudí began studying for his degree in architecture, in 1876.

Even though he considered himself an architect long before, he was granted the official title of architect in 1878. As he signed Gaudí's diploma, Elies Rogent declared, "Qui sap si hem donat el diploma a un boig o a un geni: el temps ens ho dirà" ("Who knows if we have given this diploma to a nut or to a genius. Time will tell.") [3] The newly-designated architect immediately began to plan and design, and would remain affiliated with the school his entire life.

Gaudi was an ardent Catholic. In his later years, he abandoned secular work and devoted his life to Catholicism and his Sagrada Família. He designed the church to have 18 towers, 12 for the 12 apostles, four for the four evangelists, one for Mary and one for Jesus. Soon after work began, his closest family and friends began to die. His works slowed to a halt, and his attitude changed. Perhaps one of his closest family members, his niece Rosa Egea, died in 1912, followed by a "faithful collaborator, Francesc Berenguer Mestres" two years later. After both tragedies, Barcelona fell on hard times economically. The construction of La Sagrada Família slowed; the construction of La Colonia Güell ceased altogether. Four years later, Eusebi Güell, his patron, died.[5]

Perhaps it was because of this unfortunate sequence of events that Gaudí changed. He became reluctant to talk with reporters or have his picture taken, and solely concentrated on his masterpiece, La Sagrada Família.[5]

On June 7, 1926, Antoni Gaudí was run over by a tram. Because of his ragged attire and empty pockets, a number of cab drivers refused to pick him up for fear that he would be unable to pay the fare. He was eventually taken to a pauper's hospital in Barcelona. Nobody recognized the injured artist until his friends found him the next day. When they tried to move him into a nicer hospital, Gaudí refused, reportedly saying: "I belong here among the poor." He died five days later on June 12, 1926. Half of Barcelona mourned his death. He was buried in the midst of La Sagrada Família.[5] Because he did not use blueprints for his unfinished masterpiece but worked from his imagination, his fellow workers could not complete it. Because of this, Gaudí is known to many in Spain as "God's Architect." La Sagrada Família is now being restored but differences between his work and the new additions can be noticed. 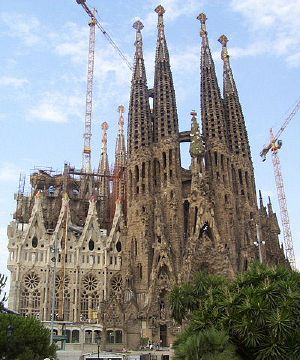 Gaudí's first works were designed in the style of gothic and traditional Spanish architectural modes, but he soon developed his own distinct sculptural style. French architect Eugene Viollet-le-Duc, who promoted an evolved form of gothic architecture, proved a major influence on Gaudí. Gaudi surpassed the master architect and contrived highly original designs, irregular and fantastically intricate. Some of his greatest works, most notably La Sagrada Família, have an almost hallucinatory power. 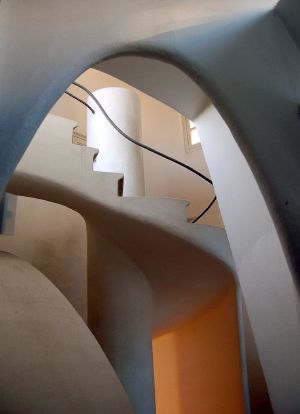 Gaudi integrated the catenary (parabolic) arch and hyperboloid structures, nature's organic shapes,[6] and the fluidity of water into his architecture. While designing buildings, he observed the forces of gravity and related catenary principles.[7] Gaudí designed many of his structures upside down by hanging various weights on interconnected strings or chains, using gravity to calculate catenaries for a natural curved arch or vault.[6]

The architect's work was categorized as Art Nouveau architecture, a precursor to modern architecture. But his adoption of biomorphic shapes rather than orthogonal lines put him in a category of his own (in Latin, sui generis).

Though he was hailed as a genius, some scholars speculate that Gaudí was color blind and that it was only in collaboration with Josep Maria Jujol—an architect 27 years his junior whom he acknowledged as a genius in his own right—that he produced his greatest works.

Gaudí, throughout his life, was fascinated by nature. He studied nature's angles and curves and incorporated them into his designs. Instead of relying on geometric shapes, he mimicked the way trees and humans grow and stand upright. The hyperboloids and paraboloids he borrowed from nature were easily reinforced by steel rods and allowed his designs to resemble elements from the environment.

Because of his rheumatism, the artist observed a strict vegetarian diet, used homeopathic drug therapy, underwent water therapy, and hiked regularly. Long walks, besides suppressing his rheumatism, further allowed him to experience nature.

Gaudí's originality was at first ridiculed by his peers, and he was supported only by the rich industrialist Eusebi Güell. His fellow citizens referred to the Casa Milà as La Pedrera ("the quarry"), and the famous author George Orwell, who stayed at Barcelona during the Spanish Civil War, admittedly loathed his work. As time passed, though, Gaudi's work became more respected, and he is now considered one of Catalonia's, and the world's, best architects.

The opportunities afforded by Catalonia's socioeconomic and political influences were endless. Catalans such as Antoni Gaudí often showcased the region's diverse art techniques in their works. By mimicking nature, such artists symbolically pushed back the province's ever-increasing industrial society. Gaudí, among others, promoted the Catalan movement for regaining independence from Spain by incorporating elements of Catalan culture in his designs.[7]

Retrieved from https://www.newworldencyclopedia.org/p/index.php?title=Antoni_Gaudi&oldid=1059576
Categories:
Hidden category:
This page was last edited on 30 October 2021, at 12:08.
Content is available under Creative Commons Attribution/Share-Alike License; additional terms may apply. See Terms of Use for details.