The nematodes or roundworms (Phylum Nematoda from Greek νῆμα (nema): "thread" + ode "like") are one of the most common phyla of animals, with over 20,000 different described species. They have bodies that are long and slender and taper at both ends.

Nematodes are ubiquitous in freshwater, marine, and terrestrial environments, where they often outnumber other animals in both individual and species counts. They are found in locations as diverse as Antarctica and oceanic trenches. Only the Arthropoda are more diverse.

There are a great many parasitic forms of nematodes, including pathogens in most plants and animals. About 50 species of roundworms cause enormous economic damage or physical suffering as parasites of plants and animals, and humans themselves are host to about 50 different roundworm species (Towle 1989).

In some cases, personal responsibility can play an important role in preventing infections by parasites. For example, the hookworms Ancyostoma and Necator, which infect over 400 million people, enter through the feet of hosts, and thus wearing shoes in likely infected areas is a preventative measure. Trichinella spiralis, which causes the disease trichinosis, comes from infected pork, and Ascaris, which can cause death and respiratory disease, comes via contaminated food and water. Thus, proper hygiene and care of what one consumes are also preventative measures. Taking advantage of medical information is likewise valuable for prevention, diagnosis, and treatment.

Nematodes, or roundworms, range in length from less than one millimeter to 120 centimeters (the female guinea worm) (Towle 1989).

Like mollusks, nematodes are triploblastic (having three primary germ layers: the ectoderm, mesoderm, and endoderm) protostomes. However, unlike mollusks, which have a true coelom (eucoelom; fluid filled body cavity with a complete lining derived from the mesoderm), the nematodes have a pseudocoelom (a "false cavity," whereby tissue derived from the mesoderm only partly lines the fluid filled body cavity). In nematodes, as with rotifers (Phylum Rotifera), the body cavity is lined on the inside by endoderm and on the outside by mesoderm (Towle 1989).

Nematodes are thin and are round in cross section, though they are actually bilaterally symmetric. Most bilaterially symmetrical animals have a true coelom, unlike the nematodes.

Nematodes are one of the simplest animal groups to have a complete digestive system, with a separate orifice for food intake and waste excretion, a pattern followed by all subsequent, more complex animals. As a pseudocoel, the body cavity lacks the muscles of coelomate animals that force food down the digestive tract. Nematodes thus depend on internal/external pressures and body movement to move food through their digestive tracts. The mouth is often surrounded by various flaps or projections used in feeding and sensation. Excretion is through a separate excretory pore.

Nematodes have no circulatory or respiratory systems, so they use diffusion to breathe and for circulation of substances around their body. Nematodes have a simple nervous system, with a main nerve cord running along the ventral side. Sensory structures at the anterior end are called amphids, while sensory structures at the posterior end are called phasmids.

The portion of the body past the anus or cloaca is called the "tail."

The nematode epidermis secretes a layered cuticle made of keratin that protects the body from drying out, from digestive juices, or from other harsh environments. In some species, it sports projections such as cilia that aid in locomotion. Although this cuticle allows movement and shape changes via a hydrostatic skeletonal system, it is very inelastic and does not allow the volume of the worm to increase. Therefore, as the worm grows, it has to ecdysis and form new cuticles. As cuticles do not allow volume to increase, high hydrostatic pressure is maintained inside the organism, yielding the round form of the worms.

Most free-living nematodes are microscopic, though a few parasitic forms can grow to several meters in length (typically as parasites of very large animals such as whales).

Nematodes lack circular muscles, so the body can only undulate from side to side. Contact with solid objects is necessary for locomotion; its thrashing motions vary from mostly to completely ineffective at swimming.

Nematodes generally eat bacteria, fungi, and protozoans, although some are filter feeders.

Reproduction is usually sexual. Males are usually smaller than females (often very much smaller) and often have a characteristically bent tail for holding the female for copulation. During copulation, one or more chitinized spicules move out of the cloaca and are inserted into the genital pore of the female. Amoeboid sperm crawl along the spicule into the female worm. Nematode sperm is thought to be the only eukaryotic cell without the globular protein G-actin.

Eggs may be embryonated or unembryonated when passed by the female, meaning that their fertilized eggs may not yet be developed. In free-living roundworms, the eggs hatch into larva, which eventually grow into adults; in parasitic roundworms, the life cycle is often much more complicated.

In free-living species, development usually consists of four molts of the cuticle during growth.

One roundworm of note is Caenorhabditis elegans, which lives in the soil and has found much use as a model organism. C. elegans has had its entire genome sequenced, as well as the developmental fate of every cell determined, and every neuron mapped.

Parasitic forms of nematodes often have quite complicated life cycles, moving between several different hosts or locations in the host's body. Infection occurs variously by eating uncooked meat with larvae in it, by entrance into unprotected cuts or directly through the skin, by transfer via insect vectors, and so forth.

Nematodes commonly parasitic on humans include whipworms, hookworms, pinworms, ascarids, and filarids. The species Trichinella spiralis, commonly known as the trichina worm, occurs in rats, pigs, and human beings, and is responsible for the disease trichinosis. People can get infected when they consume undercooked pork. Baylisascaris usually infests wild animals, but can be deadly to humans as well. Haemonchus contortus is one of the most abundant infectious agents in sheep around the world, causing great economic damage to sheep farms.

Ancylostoma and Necator are two genera of hookworms that harm over 400 million people worldwide, and Necator causes about 90 percent of tropical and semitropical infestations (Towle 1989). Since they bore through the feet of hosts, shoes can protect against infestations.

In contrast, entomopathogenic nematodes parasitize insects and are considered by humans to be beneficial.

One form of nematode is entirely dependent upon the wasps, which are the sole source of fig fertilization. They prey upon the wasps, riding them from the ripe fig of the wasp's birth to the fig flower of its death, where they kill the wasp, and their offspring await the birth of the next generation of wasps as the fig ripens.

Plant parasitic nematodes include several groups causing severe crop losses. The most common genera are: Aphelenchoides (foliar nematodes), Meloidogyne (root-knot nematodes), Heterodera, Globodera (cyst nematodes) such as the potato root nematode, Nacobbus, Pratylenchus (lesion nematodes), Ditylenchus, Xiphinema, Longidorus, Trichodorus. Several phytoparasitic nematode species cause histological damages to roots, including the formation of visible galls (Meloidogyne) which are useful characters for their diagnostic in the field. Some nematode species transmit plant viruses through their feeding activity on roots. One of them is Xiphinema index, vector of GFLV (Grapevine Fanleaf Virus), an important disease of grapes.

Other nematodes attack bark and forest trees. The most important representative of this group is Bursaphelenchus xylophilus, the pine wood nematode, present in Asia and America and recently discovered in Europe. 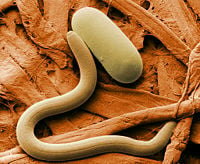 Depending on the species, a nematode may be beneficial or detrimental to a gardener's cause.

From a gardening perspective, there are two categories of nematodes, predatory ones that will kill garden pests like cutworms, and pest nematodes like the root-knot nematode, which attack garden plants.

Predatory nematodes can be bred by soaking a specific recipe of leaves and other detritus in water, in a dark, cool place, and can even be purchased as an organic form of pest control.

Nematode classification varies with the system. Older taxonomies do not even have a Nematoda as a phylum, but rather as a class under phylum Nemathelminthes.

The nematodes were originally named Nematoidea by Rudolphi (1808). They were renamed Nematodes by Burmeister 1837 (as a family; Leuckart 1848 and von Siebold 1848 both promoted them to the rank of order), then Nematoda (Diesing 1861). However, Nathan Cobb (1919) argued that they should be called Nemata or Nemates (and in English 'nemas' rather than 'nematodes'). After some confusion, which saw the nematodes placed (often together with the horsehair worms, Nematomorpha) as a class or order in various groups, such as Aschelminthes, Ray Lankester (1877) definitively promoted them to the level of phylum.

Current studies suggest that roundworms (nematodes) are related to the arthropods and priapulids in a newly recognized group, the Ecdysozoa (molting animals).