Fig is the common name given to any vine, shrub, or tree in the genus Ficus of the mulberry family, Moraceae. The term also is used for the sweet, edible, round to oval, "fruit" of the common fig tree, Ficus carica, which is of commercial importance. The soft flesh of this multiple fruit, which is actually a multiple fruit, comprises many tiny, seedlike fruits. The multiple fruits of many other species are edible, though not widely consumed.

In addition to the common fig, Ficus carica, the most well known species, other examples of figs include the banyans and the sacred fig (Peepul or Bo) tree.

Figs are significant in a number of symbolic, religious, ecological, nutritional, and commercial contexts. The fig leaf is often presented as a symbol of modesty, and in the Biblical book of Genesis, Adam and Eve covered their genital areas with fig leaves after the Fall. The sacred fig, Ficus religiosa, is considered sacred by the followers of Hinduism, Jainism, and Buddhism, and legends tell that Siddhartha Gautama was sitting underneath a Bo Tree when he was enlightened or awakened.

Fig trees together with fig wasps provide a good example of cooperation in biology through their relationship of obligate mutualism in which the very small fig wasp pollinates the flowers inside the fig multiple fruit—typically one particular species of wasp for each species of tree—while the fig tree's multiple fruit provides nourishment and a safe haven for the wasp.

The multiple fruit of the common fig tree has been an important food crop for thousands of years, and can be eaten fresh, dried, and used in jam-making. Evidence of cultivation traces back over 9,000 years.

Ficus is a genus of about 800 species of woody trees, shrubs, and vines in the family Moraceae. It is native throughout the tropics with a few species extending into the warm temperate zone. Most species are evergreen, while some from temperate areas and areas with a long dry season are deciduous. The Ficus genus is characterized by its "fruit" which is a fleshy, fruit-like body (a syconium) containing inside it hundreds of tiny flowers. The fruit-like body or receptacle is commonly thought of as a fruit, but it is properly a false fruit or multiple fruit, in which the flowers and seeds grow together to form a single mass. Technically, a fig fruit would be one of the many mature, seed-bearing flowers found inside one receptacle. The genus Dorstenia, also in the family Moraceae, exhibits similar tiny flowers arranged on a receptacle, but in this case the receptacle is a more or less flat, open surface.

In other words, a fig multiple fruit is derived from a specially adapted type of inflorescence (structural arrangement of flowers) growing on the inner surface of an involuted and nearly closed receptacle or syconium. Thus, the actual flowers of the fig are unseen unless the fig is cut open. In Chinese, the fig is called "fruit without flower."

The syconium often has a bulbous shape with a small opening (the ostiole) at the apex that allows access by pollinators. The flowers are pollinated by very small wasps that crawl through the opening in search of a suitable place to reproduce (lay eggs). Without this pollinator service, fig trees cannot reproduce by seed. In turn, the syconiums provide a safe haven and nourishment for the next generation of wasps. 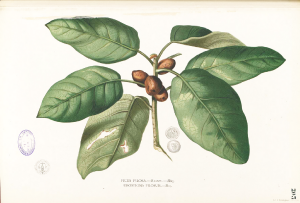 The fig plants have three different types of flowers: female long, female short, and male. The fig wasps can implant their eggs only in the female short flowers and the new generation of wasps that hatches from the planted eggs needs to pick up pollen from the male flowers before the wasps leave their protective syconium.

In temperate climes, wasps hibernate in figs, and the trees bear distinct crops. Caprifigs bear three crops per year; edible figs bear two. The first of the two is small and is called breba; the breba figs are olynths. Some selections of edible figs do not require pollination at all, and will produce a crop of figs (albeit without fertile seeds) in the absence of caprifigs or fig wasps.

The common fig, Ficus carica, is a large, deciduous shrub or small tree native to southwest Asia and the eastern Mediterranean region (Greece east to Afghanistan). 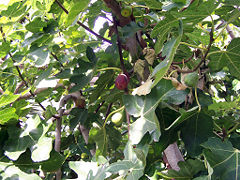 Ficus carica grows to a height of 3-10 meters tall, with smooth grey bark. The leaves are 12-25 centimeters (cm) long and 10-18 cm across, and deeply lobed with three or five lobes. The sap of the tree's green parts is an irritant to human skin. The multiple fruit is three to five centimeters long, and typically green when immature and purple when ripe. 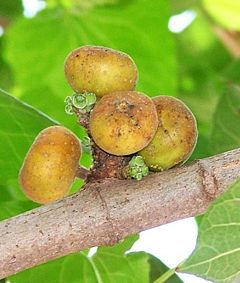 The common fig is widely grown for its edible fruit throughout its natural range and also in the rest of the Mediterranean region and other areas of the world with a similar climate, including Australia, Chile, and South Africa, as well as California, Oregon, Texas, and Washington in the United States. FAO reports that Turkey was the top fig producer in 2005 followed by Egypt and other Mediterranean countries.

Thousands of cultivars, most unnamed, have been developed or come into existence as human migration brought the fig to many places outside its natural range. 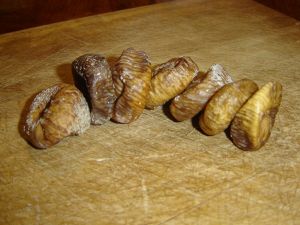 The multiple fruit of the common fig has been an important food crop for thousands of years.

Figs can be eaten fresh or dried, and used in jam-making. Most commercial production is in dried or otherwise processed forms, since the ripe fruit does not transport well, and once picked does not keep well. In Bengal, the fruit is called Dumur. It is cooked as a vegetable and is believed to be good for heart ailments.

Figs also have higher quantities of fiber than any other dried or fresh fruit, and are very high in calcium, as well as being a good source of iron and potassium. Figs also are good source of flavonoids and polyphenols (Vinson 1999). Figs and other dried fruit were measured for their antioxidant content. A 40 gram portion of dried figs (two medium size figs) produced significant increase in plasma antioxidant capacity (Vinson 2005). 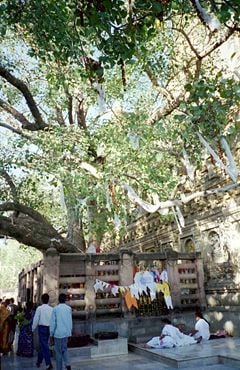 The sacred fig, Ficus religiosa, also known as Bo, Peepal(Peepul), or Ashwattha tree, is a species of banyan fig native to Nepal and India, southwest China, and Indochina east to Vietnam. It is a large dry season-deciduous or semi-evergreen tree up to 30 meters tall and with a trunk diameter of up to three meters.

The Bodhi tree and the Sri Maha Bodhi propagated from it are famous specimens of sacred fig. The known planting date of the latter, 288 B.C.E., gives it the oldest verified age for any angiosperm plant.

This plant is considered sacred by the followers of Hinduism, Jainism, and Buddhism, and hence the name "sacred fig" was given to it. Siddhartha Gautama is said to have been sitting underneath a Bo Tree when he was enlightened (Bodhi), or "awakened" (Buddha). Today Sadhus still meditate below this tree.

The edible fig is one of the first plants that was cultivated by humans. An article in Science stated that nine fossilized figs, dating to about 9,400-9,200 B.C.E. were found in the early Neolithic village Gilgal I in the Jordan Valley, just eight miles north of ancient Jericho. As the figs were of the parthenocarpic type, they are of an early domestic breed. It is proposed that they may have been planted and cultivated intentionally, one thousand years before the next crops were domesticated. Since the find predates the domestication of wheat, barley, and legumes, the fig may be the first known instance of agriculture (BBC 2006).

Figs were also a common food source for the Romans. Cato the Elder, in his De Agri Cultura, lists several strains of figs grown at the time he wrote his handbook: the Mariscan, African, Herculanean, Saguntine, and the black Tellanian (De agri cultura, ch. 8).

In the book of Genesis in the Bible, Adam and Eve clad themselves with fig leaves after eating the "Forbidden fruit" from the Tree of Knowledge of Good and Evil. Likewise, fig leaves, or depictions of fig leaves, have long been used to cover the genitals of nude figures in painting and sculpture. Often these fig leaves were added by art collectors or exhibitors long after the original work was completed.

The use of the fig leaf as a protector of modesty or shield of some kind has entered the language.

The biblical quote "each man under his own vine and fig tree" (1 Kings 4:25) has been used to denote peace and prosperity. It was commonly quoted to refer to the life that would be led by settlers in the American West. Fig trees are also mentioned in Qur'an in many places.

The phallic shape of the young fig is referred to in Song of Songs chapter 2 verse 13. The fig tree is sacred to Dionysus.

Since the flower is invisible, there is a Bengali proverb: Tumi jeno dumurer phool hoe gele, meaning "you have become invisible like the dumur flower." The derisive English idiom I don't care a fig probably originates from the abundance of this fruit.

In Greek mythology the god Apollo sends a crow to collect water from a stream for him. The crow sees a fig tree and waits for the figs to ripen, tempted by the fruit. He knows that he is late and that his tardiness will be punished so he gets a snake from the stream and collects the water. He presents Apollo with the water and says the snake was the reason for the lateness. Apollo sees through the crow's lie and throws the crow, goblet, and snake into the sky where they supposedly make the constellations Hydra (constellation), Crater (constellation) and Corvus (constellation).