Wheat includes any agricultural cereal grass of the genus Triticum in the grass family Poaceae. Wheat is one of the top three cereal crops in terms of global production, along with maize and rice; together wheat, maize, and rice provide over half of the global requirement of calories and protein (Biodiversity International 2007). Wheat can grow in a wide range of climates; though, it grows most favorably in temperate climates and is susceptible to disease in very hot and humid zones. 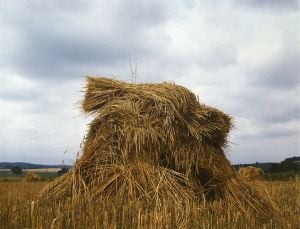 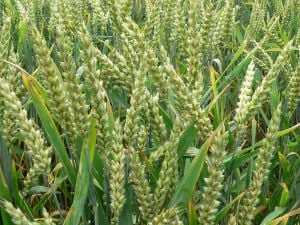 Wheat provides other values to human beings as well. It is used for fermentation to make biofuel, beer (Palmer 2001), and vodka (Neill 2002). Wheat is planted to a limited extent as a forage crop for livestock and the straw can be used as fodder for livestock or as a construction material for roofing thatch (A. Smith 1995).

Wheat is a member of the grass family, Poaceae, one of the largest and most important plant families, which also includes rice and sugar cane. There are about 600 genera and perhaps ten thousand species of grasses.

Grasses, like orchids and palms, are monocotyledons. Monocotyledons are one of two major groups of flowering plants (angiosperms), the other being dicotyledons. Monocotyledons have only one cotyledon, or embryo leaf, rather than the two found in Dicotyledons. The largest family in the monocotyledon group (and in the flowering plants) is the orchids. However, the most economically important family in this group is the grasses, which include the true grains (rice, wheat, maize, barley, etc.). Unlike dicotyledons, the true grasses are specialized for wind pollination and produce smaller flowers.

Wheat is any of the cereal grasses of the Triticum genus. It has an inflorescence (group of cluster of flowers on a branch) that is a spike, an unbranched, indeterminate inflorescence with sessile flowers arranged along an axis. Each spikelet may have several florets with grains that may be hard or soft, white, red, or purple. The grain includes the embryo and a largely starch endosperm covered by layers. It is an annual plant.

Wheat genetics is more complicated than that of most other domesticated species. Some wheat species are diploid, with two sets of chromosomes, but many are stable polyploids, with four sets of chromosomes (tetraploid) or six (hexaploid).

There are many botanical classification systems used for wheat species. The name of a wheat species from one information source may not be the name of a wheat species in another. Within a species, wheat cultivars are further classified by wheat breeders and farmers in terms of growing season, such as winter wheat versus spring wheat, by gluten content, such as hard wheat (high protein content) versus soft wheat (high starch content), or by grain color (red, white, or amber) (Bridgwater 1966).

Spikelets of a hulled wheat, einkorn

The four wild species of wheat, along with the domesticated varieties einkorn (Potts 1996), emmer (Nevo 2002), and spelt (Vaughan 2003) have hulls. This more primitive morphology consists of toughened glumes that tightly enclose the grains, and, in domesticated wheats, a semi-brittle rachis that breaks easily on threshing. The result is that when threshed, the wheat ear breaks up into spikelets. To obtain the grain, further processing, such as milling or pounding, is needed to remove the hulls or husks. In contrast, in free-threshing (or naked) forms such as durum wheat and common wheat, the glumes are fragile and the rachis tough. On threshing, the chaff breaks up, releasing the grains. Hulled wheats are often stored as spikelets because the toughened glumes give good protection against pests of stored grain (Potts 1996).

Wheat and barley were the first cereals known to have been domesticated. Wheat originated in Southwest Asia in the area known as the Fertile Crescent. The earliest archaeological evidence for wheat cultivation comes from the Levant (large area in Middle East) and Turkey. Around 10,000 years ago, wild einkorn and emmer wheat were domesticated as part of the origins of agriculture in the Fertile Crescent (Kingfisher 2004). Cultivation and repeated harvesting and sowing of the grains of wild grasses led to the domestication of wheat through selection of mutant forms with tough ears, which remained intact during harvesting, and larger grains. Because of the loss of seed dispersal mechanisms, domesticated wheats have limited capacity to propagate in the wild (C. Smith 1995).

The cultivation of wheat began to spread beyond the Fertile Crescent during the Neolithic period. By about five thousand years ago, wheat had reached Ethiopia, India, Ireland, and Spain. A millennium later it reached China (C. Smith 1995). Agricultural cultivation using horse collar leveraged plows (three thousand years ago) increased cereal grain productivity yields, as did the use of seed drills which replaced broadcasting sowing of seed in the eighteenth century. Yields of wheat continued to increase, as new land came under cultivation and with improved agricultural husbandry involving the use of fertilizers, threshing machines and reaping machines (the 'combine harvester'), tractor-draw cultivators and planters, and better varieties. More currently, with population growth rates falling, while yields continue to rise, the acreage devoted to wheat may start to decline for the first time in modern human history (Economist 2005).

In 2007, wheat stocks reached their lowest since 1981, and 2006 was the first year in which the world consumed more wheat than the world produced—a gap that is continuously widening as the requirement for wheat increases beyond production. The use of wheat as a bio-fuel will exacerbate the situation.

In traditional agricultural systems, wheat is often grown as landraces, informal farmer-maintained populations that often maintain high levels of morophological diversity. Although landraces of wheat are no longer grown in Europe and North America, they continue to be important elsewhere.

The origins of formal wheat breeding lie in the nineteenth century, when single-line varieties were created through selection of seed from a single plant noted to have desired properties. Modern wheat breeding developed in the first years of the twentieth century and was closely linked to the development of Mendelian genetics. The standard method of breeding inbred wheat cultivars is by crossing two lines using hand emasculation, then selfing or inbreeding the progeny many (ten or more) generations before release selections are identified to released as a variety or cultivar (Bajaj 1990).

F1 hybrid wheat cultivars should not be confused with wheat cultivars deriving from standard plant breeding. Heterosis or hybrid vigor (as in the familiar F1 hybrids of maize) occurs in common (hexaploid) wheat, but it is difficult to produce seed of hybrid cultivars on a commercial scale as is done with maize, because wheat flowers are complete and normally self-pollinate (Bajaj 1990). Commercial hybrid wheat seed has been produced using chemical hybridizing agents, plant growth regulators that selectively interfere with pollen development, or naturally occurring cytoplasmic male sterility systems. Hybrid wheat has been a limited commercial success, in Europe (particularly France), the USA and South Africa (Basra 1999). 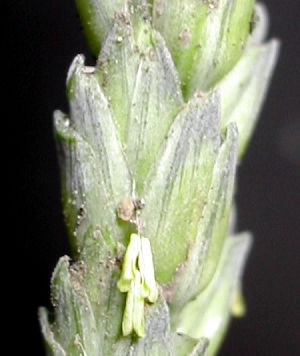 Wheat spikelet with the three anthers sticking out.

Wheat normally requires between 110 and 130 days between planting and harvest, depending upon climate, seed type, and soil conditions. Crop management decisions require knowledge of the stage of development of the crop. In particular, spring fertilizer applications, herbicides, fungicides, and growth regulators are typically applied at specific stages of plant development.

Knowledge of stages can be helpful in identifying periods of higher risk in a given climate. For example, during the meiosis stage, wheat is extremely susceptible to low temperatures (under four degrees Celsius) or high temperatures (over twenty-five degrees Celsius). Farmers also benefit from knowing when the flag leaf (last leaf) appears, as this leaf accounts for about seventy-five percent of photosynthesis reactions during the grain-filling period, and as a result should be preserved from disease or insect attacks to ensure a good yield.

Several systems exist to identify crop stages, with the Feekes and Zadoks scales being the most widely used. Each scale is a standard system that describes successive stages reached by the crop during the agricultural season.

Estimates of the amount of wheat production lost owing to plant diseases vary between ten and twenty-five percent in Missouri (Palm 1993). A wide range of organisms infect wheat, of which the most important are viruses and fungi. Some common viruses include barley yellow dwarf virus (BYDV), wheat streak mosaic (WSM), and wheat soil-borne mosaic (WSBM).

Wheat is used as a food plant by the larvae of some Lepidoptera species including The Flame, Rustic Shoulder-knot, Setaceous Hebrew Character, and Turnip Moth.