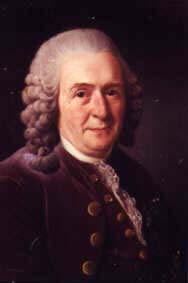 Carl Linnaeus (May 23, 1707 – January 10, 1778), also known after his ennoblement as Carl von Linné, and in English usually under the Latinized name Carolus Linnaeus, the name with which his publications were signed, was a Swedish botanist, physician, and zoologist who laid the foundations for the modern scheme of nomenclature. He is also considered one of the fathers of modern ecology. He is known as the "father of modern taxonomy."

Linnaeus made important, lasting contributions to biology. However, his work also had social implications beyond that of taxonomic principles. Linnaeus's classification of humans as primates, and identification of their species name as Homo sapiens (wise man), rather than another epithet, guided science in a path deviating from one integrated with a more religious view. Linnaeus himself noted that he could not find a generic difference between humans and primates in accordance with natural history. Linnaeus's division of humans according to race, including based on perceived social and emotional attributes, would also have cultural implications.

Linnaeus' name comes in different variants: "Carl Linnaeus," "Carolus Linnaeus," and "Carl von Linné," and sometimes just "Carl Linné." There is often confusion about his real (Swedish) name, as opposed to the Latinized form "Carolus Linnaeus" that he used most when he published his scientific works (in Latin).

In Linnaeus' time, most Swedes had no surnames. Linnaeus' grandfather was named Ingemar Bengtsson (son of Bengt), according to Scandinavian tradition. Linnaeus' father was known as Nils Ingemarsson (son of Ingemar). Only for registration purposes, for example when matriculating at a university, one needed a surname. In the academic world, Latin was the language of choice, so when Linnaeus' father went to the University of Lund, he coined himself a Latin surname: Linnaeus, referring to a large linden (lime) tree on the family property Linnagård (linn being a now obsolete variant of Swedish lind, the linden). Nils Ingemarsson gave his son the name Carl. So the Swedish name of the boy was Carl Linnaeus (Stearn 1992).

When Carl Linnaeus enrolled as a student at the University of Lund, he was registered as "Carolus Linnaeus." This Latinized form was the name he used when he published his works in Latin. After he was ennobled in 1761 (Stearn 1957), he took the name Carl von Linné. 'Linné' is a shortened version of 'Linnaeus' and 'von' is added to signify his being considered nobility.

When referring to or citing the author Linnaeus, it is appropriate to use "Carl Linnaeus," "Carolus Linnaeus," or just "Linnaeus." "Carl von Linné" seems to be less suitable, especially for the works he published before 1762. On the title page of the second edition of Species plantarum (1762), the author's name is still printed as 'Carolus Linnaeus' (or rather the genitive form 'Caroli Linnaei'), but from then on, his name is quite consistently printed as 'Carolus a Linne' or 'Carl von Linné.' Stafleu uses 'Carl Linnaeus' as the author's name for all his works.

The adjective of his name is usually "Linnaean," but the prestigious Linnean Society of London has a journal The Linnean, and awards the Linnean Medal.

Linnaeus was born on a farm on May 23, 1707. The farm was called Råshult and was located in Älmhult Municipality in the province of Småland in southern Sweden. Like his father and maternal grandfather, Linnaeus was groomed as a youth to be a churchman, but he showed little enthusiasm for it. His interest in botany impressed a physician from his town and he was sent to study at Lund University, transferring to Uppsala University after one year.

Linnaeus had been impressed by what he read about the stamens and pistils of flowers as sexual organs. At Uppsala, he wrote a short work on the subject that earned him a position at the Botanical Gardens. 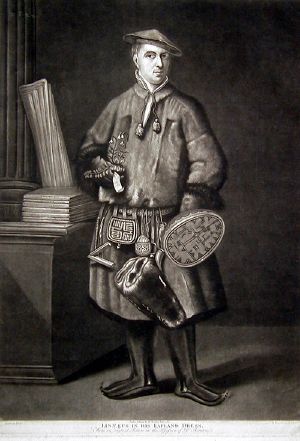 In 1732, the Academy of Sciences at Uppsala financed his expedition to explore Lapland, then virtually unknown. The result of this was firstly The Florula Lapponica, and later the Flora Lapponica, published in 1737.

In 1735, Linnaeus moved to the continent. In the Netherlands, he earned his one and only academic degree. He also met Jan Frederik Gronovius and showed him a draft of his work on taxonomy, the Systema Naturae. This was published in the Netherlands the same year, as an 11-page work.

By the time it reached its tenth edition (1758), the Systema Naturae included classifications of 4,400 species of animals and 7,700 species of plants. In it, the unwieldy names mostly used at the time, such as "Physalis amno ramosissime ramis angulosis glabris foliis dentoserratis," were supplemented with concise and now familiar "binomials," composed of the generic name, followed by a specific epithet, such as Physalis angulata. These binomials could serve as a label to refer to the species. Higher taxa were constructed and arranged in a simple and orderly manner. Although the system, now known as binomial nomenclature, was developed by the Bauhin brothers (Gaspard Bauhin and Johann Bauhin) almost two hundred years earlier, Linnaeus was the first to use it consistently, and may be said to have popularized it within the scientific community.

Linnaeus named taxa in ways that personally struck him as commonsense; for example, human beings are Homo sapiens (wise man). He also briefly described a second human species, Homo troglodytes ("cave-dwelling man"). This was, however, likely a confusion originating from exaggerated second- or third-hand accounts of the chimpanzee (currently most often placed in a different genus, as Pan troglodytes). The group "mammalia" are named for their mammary glands. Not only is this a defining characteristics of mammals, but it has been said to originate from Linnaeus's own advocacy of mothers' breastfeeding their own children; Linnaeus himself authored a book on the issue (Marks 1997).

In 1739, at the age of 32, Linnaeus married Sara Morea, daughter of a physician. He ascended to the chair of medicine at Uppsala two years later, soon exchanging it for the chair of Botany. He continued to work on his classifications, extending them to the kingdom of animals and the kingdom of minerals. The last may seem somewhat odd, but the theory of evolution was still a long time away, and Linnaeus was only attempting a convenient way of categorizing the elements of the natural world.

Linnaeus' research had begun to take science on a path that diverged from what had been taught by religious authorities; the local Lutheran Archbishop had accused him of "impiety." In a letter [1] to Johann Georg Gmelin, dated February 25, 1747, Linnaeus wrote:

Declining in health his later years, Linnaeus suffered from a series of strokes in 1774. He died four years later, in 1778. 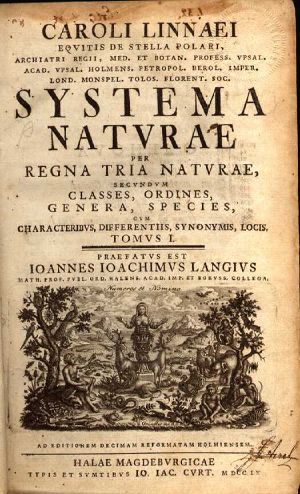 Title page of the 1760 edition of Systema Naturae.

Taxonomists, in almost any biological field, have heard of Carolus Linnaeus. His two prime contributions were: (1) to establish conventions for the naming of living organisms using binomial nomenclature (the genus name followed by the species name), and (2) developing an hierarchical system for classification of organisms. Linnaeus' conventions would become universally accepted in the scientific world.

Regarding the second contribution, during the great eighteenth century expansion of natural history knowledge, Linnaeus developed what became known as the Linnaean taxonomy. The Linnaean system classified nature within a hierarchy, starting with Kingdoms as the most all encompassing level. Kingdoms were divided into Classes and they, in turn, into Orders, which were divided into Genera (singular: genus), which were divided into Species (singular: species). Below the rank of species, Linnaeus sometimes recognized taxa of a lower (unnamed) rank. (For plants, these are now called "varieties.")

Though the Linnaean system of scientific classification has proven robust, and is now widely used in the biological sciences, the expansion of knowledge has led to development of the number of hierarchical levels within the system (phyla, family, subclasses, etc.) and there has been an increase in the administrative requirements of the system (see Universal Codes.) However, it remains the only extant working classification system at present that enjoys universal scientific acceptance. Among the later subdivisions that have arisen are such entities as Phyla (singular: phylum), superclasses, subclasses, superorders, infarorders, families, superfamilies, and tribes. In newer systems, a domain level is placed at the top of the system, above kingdom. Many of the extra hierarchical levels tend to arise in disciplines such as entomology, whose subject matter has numerous species requiring classification. Any biological field that is species rich, or which is subject to a revision of the state of extant knowledge concerning those species and their relationships to each other, will inevitably make use of the additional hierarchical levels. This is particularly true there is integration of living organisms with fossils, and when there is application of newer classification tools, such as cladistics.

Groups of organisms at any rank are now called taxa (singular: taxon) or taxonomic groups.

Modern ecologists call the task of identifying and describing all living species the "Linnaean enterprise."

Linnaeus' groupings were based upon shared physical characteristics. Although only his groupings for animals remain to this day, and the groupings themselves, as well as the underlying principles, have been significantly changed since Linnaeus' conception, Linnaeus is credited with establishing the idea of a hierarchical structure of classification that is based upon observable characteristics. The details concerning what are considered to be scientifically valid "observable characteristics" has changed with expanding knowledge. For example, DNA sequencing, unavailable in Linnaeus' time, has proven to be a tool of considerable utility for classifying living organisms and establishing their relationships to each other. However, the fundamental principles remain sound.

To some extent, Linnaeus also pioneered the division of humans according to "race," a concept that was not widely employed throughout history, where people were more often divided according to culture, religion, customs, and other such features. Within Homo sapiens, Linnaeus proposed four taxa of a lower rank: Americanus, Asiaticus, Africanus, and Europeanus. These categories were based on place of origin at first, and later skin color. Whereas Linnaeus used some physical characteristics in his division, he also wandered into attributing characteristics according to his perceived view of social and emotional features. Among the numerous attributes he recognized, Native Americans were considered to be reddish, stubborn, merry, and angered easily; Africans were black, relaxed, crafty, and negligent; Asians were sallow, avaricious, and easily distracted; and Europeans were white, gentle, and inventive (Smedley 1993). He also divided them by how he thought they were governed: by customs, caprice, opinions, and laws. Linnaeus's races were clearly skewed in favor of Europeans. Linnaeus considered these varieties of people within the same species.

In addition, in Amoenitates academicae (1763), Linnaeus made a further extrapolation, defining Homo anthropomorpha as a catch-all race for a variety of human-like mythological creatures, including the troglodyte, satyr, hydra, and phoenix. He claimed that not only did these creatures actually exist, but were, in reality, inaccurate descriptions of real-world, ape-like creatures. Furthermore, in Systema Naturæ, Linnaeus defined Homo ferus as "four-footed, mute, hairy." It included the subraces Juvenis lupinus hessensis (wolf-boys), whom he thought were raised by animals, and Juvenis hannoveranus (Peter of Hanover) and Puella campanica (Wild-girl of Champaigne). He likewise defined Homo monstrosous as agile and fainthearted, and included in this race the Patagonian giant, the dwarf of the Alps, and the monorchid Hottentot.