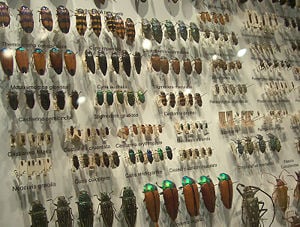 Part of a large beetle collection.

Not to be confused with Etymology, the study of the origin of words.

Entomology is the scientific study of insects. Insects are arthropods (phylum Arthropoda) belonging to the Class Insecta. With around 925,000 described species, insects comprise the most numerous and diverse group of animals, representing more than half (about 57 percent) of all identified animal species.

Insects have many kinds of interactions with humans and other forms of life on earth, including key roles in food webs and nutrient recycling, in symbiotic relationships with flowering plants as pollinators, as producers of such human products like silk, honey, and shellac, and as agricultural pests and vectors of disease. Given these factors and the sheer numbers of insects—combined with a human nature endowed with curiosity and creativity and an often viewed role as stewards of nature—it is not surprising that entomology is an important specialty within biology.

Though technically incorrect, the definition of entomology is sometimes widened to include the study of terrestrial invertebrates in other arthropod groups or other phyla, such as arachnids, myriapods, earthworms, and slugs.

Many entomologists are employed in the study of insects that are directly beneficial or harmful to humans. Beneficial insects include those that are pollinators of agricultural crops and ornamental flowers and those imported or otherwise vital as biological control agents. The study of beneficial insects is primarily focused on their ecology and life habits, the primary concern being the understanding of how to raise them and make them more productive, or protect them from human disturbance if they are native species such as wild bees.

Conversely, much of the study of insects (and related arthropods) that directly harm human beings or their domestic animals, called medical entomology and veterinary entomology, is focused on their physiology, with the goal of developing insect controls that are effective, while minimizing undesirable side effects. For instance, many types of insecticides have been developed that target unique aspects of insect physiology and are thus considered harmless to other kinds of animals. A risk to this approach is that insecticides can also kill beneficial insects. Considerable recent effort has gone into finding biological controls that are species-specific, such as species-specific parasites and diseases, as well as genetic controls, such as the introduction of sterile insects into a population. The combination of taking into account all aspects of insect biology, available control measures, economics, and environmental considerations is known as integrated pest management.

A few insects, chiefly blood-sucking Diptera, are vectors for a wide range of deadly diseases (Meyer 2003; Bowles and Swaby 2006). Mosquitoes are especially important disease vectors, with the genus Anopheles the principle vector of malaria, Aedes aegypti the main vector of yellow fever and dengue, and other Aedes spp. carrying the causal agents of various types of encephalitis (Meyer 2003). Other well-known vectors include the tsetse fly (genus Glossina transmits protozoan agents of African sleeping sickness), black flies (spread the parasitic roundworm Onchocerca volvulus, cause of onchoceriasis), and sand flies (genus Phlebotomus are vectors of bacteria that causes Carrion's disease, and sand flies are also agent of protozoans Leishmania spp. that cause Leishmaniasis) (Meyer 2003)

Forensic entomology specializes in the study of insect ecology for use in the legal system, as knowledge of insect behavior can yield useful information about crimes. For example, the approximate time of death or whether or not a victim was alive during a fire may be determined by using facts such as at what stage of life is an insect found at the scene.

Given the vast number and diversity of insects, many entomologists specialize in a single order or even a family of insects. A number of these subspecialties are given their own informal names, typically (but not always) derived from the scientific name of the group:

Insects other than Lepidoptera are typically identifiable only through the use of identification keys and monographs. Because the class Insecta contains a very large number of species, and the characters separating them are unfamiliar and often subtle (or invisible without a microscope), this is often very difficult even for a specialist.

Insect identification is an increasingly common hobby, with butterflies and dragonflies being the most popular. 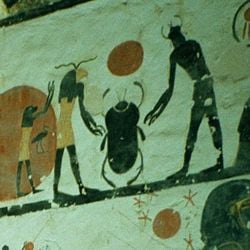 With the vast numbers, diversity, and economic importance of insects, it is not surprising that entomology is rooted in nearly all human cultures from prehistoric times. However, scientific study only began as recently as the sixteenth century. Given the voluminous amount of informal and formal study of insects, only some brief overview of select key developments are presented in this section.

Early interest of humans in insects is shown in the rock painting of bees from approximately 13,000 B.C.E. Other early indicators include jewelry dated to about 1800 to 1700 B.C.E. from Crete depicting two golden bees holding a drop of honey; a painting around 1000 B.C.E. of a Scarab beetle on a wall of Rameses IX tomb; and a discussion of Ancient Egyptian beekeeping by Roman writers Virgil, Gaius Julius Hyginus, Varro, and Columella.

The first documented forensic entomology case is reported by Song Ci around 1250 C.E. in the medico-legal text book Xiyuan Jilu, where he describes the use of insects in the case of a stabbing near a rice field.

In 1551, zoologist Conrad Gesner published the first volume of Historia animalium (“History of Animals”), a work that includes some mention of insects. 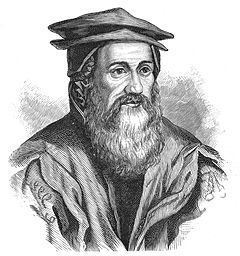 In 1669, microscopist Jan Swammerdam published History of Insects, correctly describing the reproductive organs of insects and the process of metamorphosis. The same year the anatomist Marcello Malpighi published a treatise on the structure and development of the silkworm, the first description of the anatomy of an invertebrate. Shortly thereafter, from 1696 to 1700, Antonio Vallisneri’s Dialoghi will sopra the curiosa Origine di molti Insetti (in English, “Dialogues on the curious origin of several insects”) is published; in this manuscript he, with Francesco Redi and Malpighi, contradicts the theory of spontaneous generation of maggots.

In the eighteenth century, three kinds of entomological text appeared. First, there were illustrative works—showy insects, often beautifully colored—whose purpose was sensual or aesthetic. An example is afforded by Maria von Merian's Metamorphosis Insectorum Surinamenis (“Transformations of the insects of Surinam,” 1705). It actually is a masterpiece of both art and science, and Merian, “the mother of entomology,” was the first to record the full life cycle of many species of butterflies and moths.

Second, there were descriptive and systematic (classificatory) works, usually confined to what are now known as the Insecta. In 1710, there was the first attempt at a systematic classification of insect species with the publication of John Ray’s Historia insectorum in English. Almost half-a-century later, in 1758, Carolus Linnaeus published his groundbreaking work Systema Naturae, wherein the binomial nomenclature as the convention for the naming of organisms was popularized within the scientific community. In 1761, Jacob Hübner (1761–1826), the first great world lepidopterist, was born. Before Hübner, it was held that there were few genera of Lepidoptera (butterflies), a view he overthrew. His definitions of genera remain among the best of the time and so were his classifications. Also, in 1766, Moses Harris published The Aurelian or Natural History of English Insects, namely Moths and Butterflies. This was the first book on the British Lepidoptera (butterflies and moths). Harris was a pioneer in using wing venation in insect systematics. In 1771, Johann Reinhold Forster produced the first list of American insects.

A third category of entomological texts in the eighteenth century were works advancing various subdisciplines, such as developmental biology (life cycles), internal anatomy, physiology, and so on. These often covered other invertebrate groups. An example is René Antoine Ferchault de Réaumur's Memoires pour Servir a L’Historie des Insectes.

In this century, a founding work of the scientific study of entomology was Jan Swammerdam's Biblia naturae or "Book of Nature," which was reissued in 1737.

From the beginning of the nineteenth century, the specialist began to predominate, harbingered by Johann Wilhelm Meigen's Nouvelle classification des mouches à deux aile ("New classification of the Diptera") in the first year of the century. Lepidopterists were among the first to follow Meigen’s lead. The specialists fell into three categories. First, there were species describers, then specialists in species recognition, and then specialists in gross taxonomy. There were, however, considerable degrees of overlap. Also, then, as now, few could entirely resist the lure of groups other than their own, and this was especially true of those in small countries where they were the sole 'expert', and many famous specialists in one order also worked on others. Hence, for instance, many works that began as butterfly faunas were completed as general regional works, often collaboratively.

In 1806, André Marie Constant Duméril’s Analitische Zoologie, published in both French and German, was an important text for its methodology and higher classification of insects.

Commenced in 1815 and completed in 1826, William Kirby and William Spence’s Introduction to Entomology or Elements of the Natural History of Insects (4 vols., London: Longman) is a masterpiece that makes an outstanding contribution to entomology; it also was one of the most popular scientific works of all time.

In 1900, Walter Reed, a United States Army major, was appointed president of a board "to study infectious diseases in Cuba paying particular attention to yellow fever." He concurred with Carlos Finlay in identifying mosquitoes as the agent of transmission. In 1902, Ronald Ross was awarded the Nobel Prize for Medicine for his discovery that malaria is carried by mosquitoes. The awarding committee made special mention of the work of Giovanni Battista Grassi on the life history of the "Plasmodium" parasite (a protozoan that uses the mosquito as a host).

Retrieved from https://www.newworldencyclopedia.org/p/index.php?title=Entomology&oldid=1006433
Categories:
This page was last edited on 22 August 2017, at 16:38.
Content is available under Creative Commons Attribution/Share-Alike License; additional terms may apply. See Terms of Use for details.