Silkworm is the larva or caterpillar of various species of moths, in particular, Bombyx mori, the domesticated silkmoth, whose silk cocoons can be used in the production of silk.

Silkworm species vary in terms of the quality of silk they produce and the leaves they consume. Bombyx mori (Latin: "silkworm of the mulberry tree") of the Bombycidae family feeds solely on the leaves of mulberry trees and produces the finest, most lustrous fiber—the major source of commercial silk. Other silk producers include two giant silkworms in the Saturnidae family, Samia cynthia and Antheraea pernyi. Samia cynthia, the ailanthus silkmoth, feeds on the leaves of the Ailanthus genus and produces a coarse silk, but one that is more durable and cheaper than mulberry silk. Antheraea pernyi, the Chinese tussah moth, is a major producer of another variety of wild silk (tussah silk).

This article is on Bombyx mori, which is very important economically as the producer of silk and has been domesticated to the point that it is entirely dependent on humans for its reproduction and no longer occurs naturally in the wild. Silk culture has been practiced for at least 5,000 years in China (Goldsmith et al. 2004). For many years silk was a primary commodity traded by China with the West along the Silk Road, and the silk production process was a carefully guarded secret for thousands of years.

Sericulture is the term used for the culture of silkworms for silk production.

Caterpillars of Bombyx mori are about four centimeters (1.5 inches) in length, with a pale brown coloration and brown marks on the thorax (Grzimek et al. 2004). Early instars (developmental stages of caterpillars) have tiny hairs but later instars are white, nude, and have a horn on the tail. In the process of producing a cocoon, the caterpillars manufacture an insoluble protein (fibroin) in their silk glands, mix it with a smaller amount of soluble gum, and secrete this mixture to yield a single, continuous silk fiber of some 300 to 900 meters (1000 to 3000 feet) long. The cocoon may be white to yellow in color. The adult moth that emerges is heavy bodied, furry, rounded, whitish with pale brown lines (Grzimek et al. 2004), and with a wingspan of three to six centimeters (1.5 to 2.5 inches). Females have about twice to three times the bulk of males (for they are carrying many eggs), but are similarly colored. Adults cannot fly.

The caterpillars feed on leaves of mulberry trees, with the preferred food being the white mulberry. Adults in the Bombycidae family have reduced mouth parts and do not feed.

Silkworms are native to northern China. They are totally dependent on humans; there are no wild populations.

The nearest wild relative of Bombyx mori is Bombyx mandarina, the wild silkmoth, which is able to hybridize with the domestic taxon (Goldsmith et al. 2004). It ranges from northern India to northern China, Korea, and Japan. It is not known when the domestic silkmoth diverged from its wild relatives, only that the domestic population originated from inland Chinese rather than Japanese or Korean stock (Maekawa et al. 1988; Arunkumar et al. 2006).

Bombyx mori is probably the most heavily domesticated animal known, apart from domestic hybrids such as mules. Regardless whether the domestic silkworm is derived from a wild species that has since gone extinct, or from a stock of Bombyx mandarina that was taken into human care some 4,600 years ago (Yoshitake 1968), breeding of silkworms cannot have originated before the Neolithic, as the tools necessary to make use of the silk thread on a large scale only have become available since then.

Sometimes, the wild silkmoth is considered a subspecies of Bombyx mori as they are theoretically capable of full hybridization. However, due to the domesticated moth's requirement for human care to survive, gene flow is all but nonexistent and thus, despite its apparently recent origin, the domestic animal is generally treated as a distinct monotypic species today.

The eggs of the domesticated silkworm are very small and are initially lemon-yellow but later turn black (Grzimek et al. 2004). They take about ten days to hatch.

The emerging larva have a strong appetite, as do all lepidopteran larvae, and eat day and night. While they prefer white mulberry (Morus alba), they also will consume leaves of other species of Morus (the mulberry genus) and some other Moraceae (the mulberry family). Hatchlings and second-instar larvae are called kego (毛蚕, "hairy silkworm") in Japan, or chawki in India. They are covered with little black hairs. When the color of their heads turns darker, it means that it is time for them to molt. Later instars are white, nude, and have a horn on the back.

After they have molted four times (i.e., in the fifth instar), their bodies turn slightly yellow and their skin becomes tighter. The larvae enclose themselves in a cocoon of raw silk produced in the salivary glands that provides protection during the vulnerable, almost motionless pupal state. Spinning a cocoon takes three or more days. The filament is secreted in a slow, circular, figure-eight motion from glands called spinnerets located under the jaws. 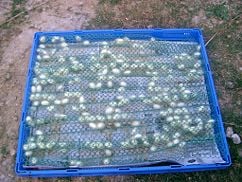 While other Lepidoptera produce cocoons, only a few large Bombycidae and Saturniidae have been exploited for fabric production.

The cocoon of the domesticated silkworm is made of a single continuous thread of raw silk from 300 to 900 meters (1000 to 3000 feet) long. The fibers are very fine and lustrous, about ten micrometers (1/2500th of an inch) in diameter. They are made mostly of an insoluble protein (fibroin), coated by a smaller amount of a water-soluble protective gum (sericin), as well as including small amounts of other substances.

Using a rough figure of one kilometer of silk (about 3300 feet) per cocoon, ten unraveled cocoons could theoretically extend vertically to the height of Mt Everest. About 2,000 to 3,000 cocoons are required to make a pound of silk, or roughly 1,000 miles of filament (Palmer 1949).

At least 70 million pounds of raw silk are produced each year, requiring nearly ten billion pounds of mulberry leaves. The annual world production represents 70 billion miles of silk filament, a distance well over 300 round trips to the sun.

If the pupating moth is allowed to survive after spinning its cocoon, it will release proteolytic enzymes to make a hole in the cocoon so that it can emerge as a moth. This would cut short the threads and ruin the silk. Instead, commercially reared silkworm pupae are killed before the adult moths emerge by dipping them in boiling water, thus allowing the whole cocoon to be unraveled as one continuous thread. This allows a much stronger cloth to be woven from the silk. The water also makes the cocoons easier to unravel, loosing the gum part of the raw fiber. The pupae also may be pierced with a needle rather than boiling. Often, the silkworm itself is eaten or used for other purposes (fertilizer, fish food, etc.).

Wild silks, or tussah silks (also spelled "tasar"), are those produced by caterpillars other than the mulberry silkworm (Bombyx mori). They are called "wild" as the silkworms cannot be artificially cultivated like Bombyx mori. A variety of wild silks have been known and used in China, India, and Europe from early times, although the scale of production has always been far smaller than that of cultivated silks. Aside from differences in colors and textures, the wild silks all differ in one major aspect from the domesticated varieties: The cocoons that are gathered in the wild have usually already been damaged by the emerging moth before the cocoons are gathered, and thus the single thread that makes up the cocoon has been torn into shorter lengths. Wild silks also tend to be more difficult to dye than silk from the cultivated silkworm.

Due to its large size and ease of culture, Bombyx mori has long been a model organism in the study of Lepidopteran and arthropod biology (Goldsmith et al. 2004). Fundamental findings on pheromones, hormones, brain structures, and physiology were made with the silkworm (Grimaldi and Engel 2005). To characterize the first known pheromone, bombykol, extracts were needed from 500,000 individuals because only very small quantities are produced (Scoble 1995).

Currently, research is focusing on genetics of silkworms and genetic engineering. Many hundreds of strains are maintained, and over 400 Mendelian mutations have been described (Goldsmith et al. 2004). One useful mutant for the silk industry confers the ability to feed on food besides mulberry leaves, including an artificial diet (Goldsmith et al. 2004). The genome has been sequenced (Mita et al. 2004), and many projects have worked on genetic engineering of silkworms to produce desirable proteins in the place of silk. Such proteins include human drugs (Grimaldi and Engel 2005).

Silkworm is the source of the traditional Chinese medicine jiāngcán ("stiff silkworm," Simplified Chinese: 僵蚕; Traditional Chinese: 僵蠶, trade name "Bombyx batryticatus"). It is the dried body of the 4-5th instar larva which has died of the white muscardine disease. Its uses are to dispel flatulence, dissolve phlegm, and relieve spasms.

Like many insect species, silkworm pupae are eaten in some cultures. In Korea they are boiled and seasoned to make a popular snack food known as beondegi. In China, street vendors sell roasted silkworm pupae.

In China, there is a legend that the discovery of the silkworm's silk was by an ancient empress called Xi Ling-Shi (Chinese: 嫘祖; pinyin: Léi Zǔ). She was drinking tea under a tree when a cocoon fell into her tea. She picked it out and as it started to wrap around her finger, she slowly felt a warm sensation. When the silk ran out, she saw a small cocoon. In an instant, she realized that this cocoon was the source of the silk. She taught this to the people and it became widespread. There are many more legends about the silkworm.

The Chinese guarded their knowledge of silk. It is said that a Chinese woman smuggled eggs to Japan, hidden in her hair. The Japanese thus began their love affair with silk. Making a single kimono requires the silk from 2100 silkworm moths.