The history of human interactions with mules has largely been one of harmony. Humans beings, through their creativity as stewards of creation, have developed many unique breeds of animals and varieties of plants. In this case, they have successful breed horses and donkeys to yield the mule. Mules exist, and in such great numbers, only because of the creative power of human beings. On the other hand, mules—which are noted for their endurance, surefootedness, and willingness to work hard—have been employed since prehistoric times in service to people, as pack, draft, and work animals.

Mules have proved particularly invaluable in the history of recent human civilization. They were used extensively in the settling of the United States, the clearing of trees for fields and roads, and the moving of wagons and loads of materials. They were used in World War I and II to move materials. They worked well with inexperienced workers and in hot weather. Even today, mules continue to be used in place of mechanized machinery in some regions of the world. 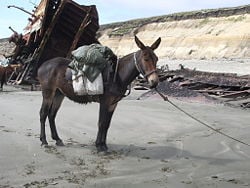 A mule is a hybrid from a cross (mating) between a male donkey and a female horse. The donkey or ass, Equus asinus, is a member of the horse family, Equidae, of the order Perissodactyla, odd-toed ungulates (hoofed mammals). The word donkey refers to the domesticated E. asinus, while its wild ancestor, also E. asinus, is called the African wild ass. The horse or domestic horse (Equus caballus) is a member of the same genus Equus. Among the ten living members of the Equus genus are also zebras, Przewalski's Horse (a rare Asian species), and hemionids (Onager or Equus hemionus).

While different species of the horse family can interbreed, offspring, such as the mule, are almost invariably sterile. Przewalski's Horse (Equus ferus Przewalski) and the domestic horse are the only equids that can cross-breed and produce fertile offspring.

The mule is usually larger in size than a hinny (a cross between a male horse and female donkey), and has monopolized the attention of breeders. The chromosome match-up more often occurs when the jack (male donkey) is the sire and the mare (female horse) is the dam, rather than the male horse as the sire. Sometimes people let a stallion (male horse) run with a jenny (female donkey) for as long as six years before she becomes pregnant. Although mules and hinnies are almost always sterile, there are rare cases of fertility. The sterility is attributed to the differing number of chromosomes of the two species: donkeys have 62 chromosomes, whereas horses have 64. Their offspring thus have 63 chromosomes, which cannot evenly divide.

Soon after the domesticated horse was introduced to the Middle East, around 1500 B.C.E., donkeys and horses began to be bred together, giving birth to mules. As a work animal, the mule in some ways is superior to both the donkey and the horse. Domestic animal expert Juliet Clutton-Brook (1999) writes:

The mule is a perfect example of hybrid vigour—as a beast of burden it has more stamina and endurance, can carry heavier loads, and is more sure-footed than either the ass or the horse.

FAO reports that China was the top market for mules in 2003 closely followed by Mexico and many Central, and South American nations.

The coat of mules comes in the same variety as that of horses. However, mules are often Bay or Sorrel due to the type of jack (sire) used. Common colors are sorrel, bay, black, and gray. Less common are White, Roans (both blue and red), Palomino, Dun, and Buckskin. Least common are Paint mules or Tobianos.

The mule is considered to possess the endurance, patience, and sure-footedness of the donkey, and the vigor, strength, and courage of the horse. Operators of working animals generally find mules preferable to horses: mules show less impatience under the pressure of heavy weights, whereas their skin, harder and less sensitive than that of horses, renders them more capable of resisting sun and rain. Their hooves are harder than horses, and they show a natural resistance to disease and insects. Many North American farmers with clay soil found mules superior as plow animals. Their popularity with farmers and settlers in the U.S. state of Missouri led to the expression "Missouri mule," and today the mule is the state animal of Missouri.

Several female mules have produced offspring when mated with a purebred horse or donkey. Since 1527, there have been more than 60 documented cases of foals born to female mules around the world. There are no recorded cases of fertile mule stallions.

Since mules and hinnies have 63 chromosomes, and donkeys and horses have 62 and 64, respectively, the different structure and number usually prevents the chromosomes from pairing up properly and creating successful embryos. In most fertile mule mares, the mare passes on a complete set of her maternal genes (i.e., from her horse/pony mother) to the foal; a female mule bred to a horse will therefore produce a 100percent horse foal. Some examples of recorded fertile mules include: 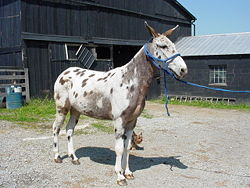 After World War II, the number of mules in the United States fell to historic lows as the use of mules for farming and transportation of agricultural products gave way to modern tractors and trucks. A dedicated number of mule breeders, however, continued the tradition as hobby and continued breeding the great lines of mammoth jacks started in the United States by George Washington with the gift from the King of Spain of two Catalan Jacks. These hobby breeders began to utilize better mares for mule production until today's modern saddle mule emerged. Exhibition shows where mules pulled heavy loads have now been joined with mules competing in Western and English Pleasure riding shows, as well as dressage and hunter jumper competition. Mules, once snubbed at traditional horse shows, have been accepted for competition at the most exclusive horse shows in the world in all disciplines.

Mules today come in all shapes sizes and colors, from minis under 50 pounds to maxis over 1000 pounds, and in many different colors. Mules from Appaloosa mares produce wildly colored mules, much like their Appaloosa horse relatives, but with even wilder skewed colors. The Appaloosa color is produced by a complex of genes known as the Leopard Complex (Lp). Mares homozygous for the Lp gene bred to any color donkey will produce an Appaloosa colored mule.

Retrieved from https://www.newworldencyclopedia.org/p/index.php?title=Mule&oldid=681719
Categories:
Hidden category:
This page was last edited on 2 April 2008, at 12:45.
Content is available under Creative Commons Attribution/Share-Alike License; additional terms may apply. See Terms of Use for details.