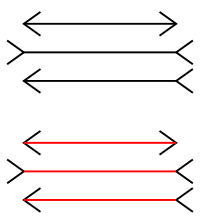 the Müller-Lyer optical illusion with arrows. Both set of arrows are exactly the same, the bottom one shows how the arrows are of the exact same length.

The Müller-Lyer illusion is an optical illusion consisting of a set of lines that end in arrowheads. The orientation of the arrowheads affects one's ability to accurately perceive the length of the lines. Like most visual and perceptual illusions, the Müller-Lyer illusion helps neuroscientists study the way the brain and visual system perceive and interpret images. Artists have also utilized the illusion to great effect in their works.

The Müller-Lyer illusion is named for Franz Carl Müller-Lyer, a German psychiatrist and sociologist. Müller-Lyer published fifteen versions of the illusion in an 1889 issue of the German journal Zeitschrift für Psychologie.[1]

The most well known version of the Müller-Lyer illusion consists of two parallel lines, one of which ends in inward pointing arrows, the other which ends with outward pointing arrows. When observing the two lines, the one with the inward pointing arrows appears to be significantly longer than the other. In other versions, one of each type of arrow is put at each end of a single line. The viewer attempts to identify the middle point of the line, only to find that he/she is consistently off to one side.

It is unclear exactly what causes the Müller-Lyer illusion to take place, but there are a number of theories. One of the most popular is the perspective explanation. 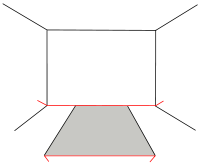 A figure to explain the Mueller-Lyer illusion.

In the three-dimensional world, we often use angles to judge depth and distance. Living in a "carpentered world," we have grown accustomed to seeing corners everywhere. The brain is used to viewing such angles and interpreting them as far and near corners, and also uses this information to make size judgments. When looking at the Müller-Lyer arrows, the brain interprets them as far and near corners, and overrides the retinal information that says both lines are the same length.

Interestingly enough, the illusion also persists when the arrows are replaced by circles, which have nothing to do with perspective or corners, and would seem to negate the perspective theory.[2]

Also popular has been the "assimilation theory," which states that we see one line as longer because the visual system is unable to separate the figure into parts. As a whole figure, the line with inward pointing arrows is indeed longer. This theory is also generally dismissed.[3]

Like most visual and perceptual illusions, the Müller-Lyer illusion helps neuroscientists study the way the brain and visual system perceive and interpret images. Artists have also utilized the illusion to great effect in their works.