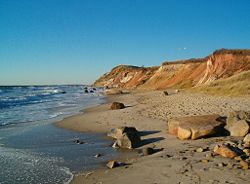 These cliffs in Martha's Vineyard, Massachusetts, are made almost entirely of clay.

Clay is a term used to describe a group of fine-grained, silicate minerals known as aluminum phyllosilicates, containing variable amounts of chemically associated water. Clay is plastic when wet, which means it can be easily shaped. When dry, it becomes firm, and when subject to high temperature, known as firing, permanent physical and chemical changes occur. These changes cause the clay to be hardened. A fireplace or oven specifically designed for hardening clay is called a kiln.

Clay soils are distinguished from other types of soil such as silt by the small grain size, flake or layered shape, affinity for water, and high degree of plasticity. The grain size of clay is typically less than two micrometers (μm) in diameter. Depending on the content of the soil, clay can appear in various colors, from a dull gray to a deep orange-red.

People discovered the useful properties of clay in prehistoric times, and one of the earliest artifacts ever uncovered is a drinking vessel made of sun-dried clay. Clays remain among the cheapest and most widely used materials, to make items ranging from art objects to bricks and cookware. They are also used in industrial processes such as papermaking and cement production. An open mine for extracting clay is called a clay pit.

Clay minerals are rich in silicon and aluminum oxides and hydroxides, and sometimes contain variable amounts of iron, magnesium, alkali metals, alkaline earths, and other cations. Clays have structures similar to the micas and therefore form flat, hexagonal sheets.

Clays are generally formed by the chemical weathering of silicate-bearing rocks by carbonic acid, but some are formed by hydrothermal activity. Clay minerals are common in fine-grained sedimentary rocks such as shale, mudstone, and siltstone, and in fine-grained metamorphic slate and phyllite.

Clay minerals include the following groups:

There are about 30 different types of 'pure' clays in these categories, but most clays in nature are mixtures of these different types, along with other weathered minerals.

Varve (or varved clay) is clay with visible annual layers, formed by seasonal differences in erosion and organic content. This type of deposit is common in former glacial lakes from the Ice Age.

Quick clay is a unique type of marine clay, indigenous to the glaciated terrains of Norway, Canada, and Sweden. It is a highly sensitive clay, prone to liquefaction, and it has been involved in several deadly landslides.

Like all phyllosilicates, clay minerals are characterised by two-dimensional sheets of corner-sharing tetrahedra made of SiO4 and AlO4. Each tetrahedron shares three of its vertex oxygen atoms with other tetrahedra. The fourth vertex is not shared with another tetrahedron and all of the tetrahedra "point" in the same direction—in other words, all the unshared vertices lie on the same side of the sheet. These tetrahedral sheets have the chemical composition (Al,Si)3O4.

Depending on the composition of the tetrahedral and octahedral sheets, the layer will have no electric charge or will have a net negative charge. If the layers are charged, this charge is balanced by interlayer cations such as Na+ or K+. In each case the interlayer can also contain water. The crystal structure is formed from a stack of layers interspaced with the interlayers. 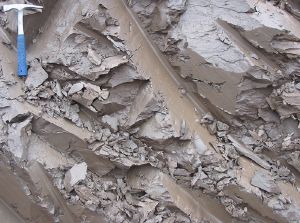 The properties of clay make it an ideal material for producing durable pottery items for both practical and decorative purposes. By using different types of clay and firing conditions, one can produce earthenware, stoneware, and porcelain.

Clays sintered in fire were the first type of ceramic. They continue to be widely used, to produce such items as bricks, cooking pots, art objects, and dishware. Even some musical instruments, such as the ocarina,are made with clay. Industrial processes that involve the use of clay include papermaking, cement production, pottery manufacture, and chemical filtration.