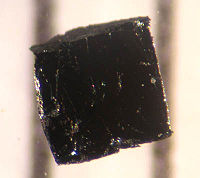 A small sample of the high-temperature superconductor BSCCO-2223 (bismuth strontium calcium copper oxide); the two lines in the background are 1 mm apart

The word ceramic is derived from the Greek word κεραμικος (keramikos), which means "having to do with pottery." The term covers inorganic, nonmetallic materials that have been hardened by baking at a high temperature. Up until the 1950s or so, the most important of these were the traditional clays, made into pottery, dinnerware, bricks, tiles, and the like. Since then, new materials called advanced ceramics have been prepared and are being used for a wide range of applications, including components used by the aerospace, automotive, defense, environmental, fiber-optic, and medical technologies.

Ceramic parts are also used in cellular phones and personal computers. Each of NASA's space shuttles has a coating of roughly 34,000 ceramic tiles, which protect it from the searing heat (up to 2,300 °F) produced during reentry into the atmosphere. Thus, advanced ceramics are an integral part of the modern technological revolution.

The American Society for Testing and Materials (ASTM) defines a ceramic item as "an article having a glazed or unglazed body of crystalline or partly crystalline structure, or of glass, which body is produced from essentially inorganic, nonmetallic substances and either is formed from a molten mass which solidifies on cooling, or is formed and simultaneously or subsequently matured by the action of the heat."

Traditional ceramics have been mainly silicate-based. Advanced ceramics are made from various other types of materials as well. Depending on their composition, they are classified as oxides, non-oxides, and composites.

The materials in each of these classes can have unique properties.

Ceramic materials and their uses

In the early 1980s, Toyota researched production of a ceramic engine that could run at a temperature above 6,000 °F (3,300 °C). Ceramic engines do not require a cooling system and hence permit major weight reduction and higher fuel efficiency. In a conventional metallic engine, much of the energy released by combustion of the fuel must be dissipated as waste heat, to prevent the metallic parts from melting. Despite these desirable properties, such engines are not being mass-produced because it is difficult to manufacture ceramic parts with the requisite precision and durability. Imperfections in the ceramic material can lead to cracks and potentially dangerous equipment failure.

Efforts are being made to develop ceramic parts for gas turbine engines. Currently, even blades made of advanced metal alloys for the hot section of an engine require cooling and careful limiting of operating temperatures. Turbine engines made with ceramics could operate more efficiently, giving aircraft greater range and payload for a set amount of fuel.

Since the late 1990s, highly specialized ceramics, usually based on boron carbide, have been used in ballistic armored vests to repel large-caliber rifle fire. Such plates are commonly known as "small-arms protective inserts" (SAPI). Similar technology is used to armor the cockpits of some military airplanes because of the lightness of the material.

Recent advances in ceramics include bio-ceramics such as dental implants and synthetic bones. Hydroxyapatite, the natural mineral component of bone, has been synthesized from a number of biological and chemical sources and can be formed into ceramic materials. Orthopedic implants made from these materials bond readily to bone and other tissues in the body without rejection or inflammatory reactions.

Hydroxyapatite ceramics, however, are usually porous and lack mechanical strength. They are therefore used to coat metal orthopedic devices, to aid in forming a bond to bone, or as bone fillers. They are also used as fillers for orthopedic plastic screws to help reduce inflammation and increase absorption of the plastic materials. Work is being done to make strong, dense, nano-crystalline hydroxyapatite ceramics for orthopedic weight-bearing devices, replacing metal and plastic materials. Ultimately, these ceramic materials, with the incorporation of proteins called collagens, may be used to make synthetic bones.

Ceramic materials can be crystalline or amorphous (lacking a definite structure). They are hard and resistant to high temperatures. In addition, they tend to be porous. The pores and other microscopic imperfections act as stress concentrators. As a result, ceramic materials are brittle—when placed under stress, they fracture rather than becoming deformed. The study of ceramics consists to a large extent of ways to accentuate the strengths and mitigate the limitations of the materials, as well as to develop new uses for these materials.

A number of ceramics are semiconductors. Most of these are oxides of transition metals, such as zinc oxide. One common use of these semiconductors is for varistors. These are electrical resistors with the unusual property of "negative resistance." Once the voltage across the device reaches a certain threshold, a change in the electrical structure of the material causes its electrical resistance to drop from several megaohms down to a few hundred ohms. As a result, these materials can dissipate a lot of energy. In addition, they self reset—after the voltage across the device drops below a threshold, its resistance returns to being high.

This property makes them ideal for surge-protection applications. The best demonstration of their ability can be found in electrical substations, where they are employed to protect the infrastructure from lightning strikes. They have rapid response, require low maintenance, and do not appreciably degrade from use.

When various gases are passed over a polycrystalline ceramic, its electrical resistance changes. Based on this property, semiconducting ceramics are used to make inexpensive gas sensors.

Under some conditions, such as extremely low temperatures, some ceramics exhibit superconductivity. The exact reason for this property is not known, but there are two major families of superconducting ceramics.

Many ceramic materials exhibit the property of piezoelectricity. A piezoelectric material develops a voltage difference between two faces when compressed or made to vibrate. This property links electrical and mechanical responses. Such ceramics are used in digital watches and other electronics that rely on quartz resonators. In these devices, electricity is used to produce a mechanical motion (powering the device) and the mechanical motion is in turn used to generate an electrical signal.

Barium titanate and lead zirconate titanate have both piezoelectric and ferroelectric properties. They are used in the manufacture of capacitors, high-frequency loudspeakers, transducers for sonar, and actuators for atomic force and scanning tunneling microscopes.

Change of electrical properties with temperature

Some crystalline semiconducting ceramics (mostly mixtures of heavy metal titanates) can conduct electricity as long as they are below a certain "transition" temperature. When heated above that temperature, their "grain boundaries" (boundaries between the little crystals that make up the material) suddenly become insulating, breaking the circuit. Such ceramics are used as self-controlled heating elements in, for example, the rear-window defrost circuits of most automobiles.

Non-crystalline ceramics, being glasses, are usually formed from melts. The glass is shaped when fully molten or when in a state of toffee-like viscosity, by methods such as casting or blowing to a mold. If the material becomes partly crystalline by later heat treatments, the resulting material is known as a "glass ceramic."

This method is most commonly used for producing cement and concrete. In this case, the dehydrated powders are mixed with water, which starts what are called hydration reactions. As a result, long, interlocking crystals begin to form around the aggregates. Over time, a solid ceramic is produced.

The biggest problem with this method is that most reactions are so fast that good mixing is not possible, preventing large-scale construction. On the other hand, small-scale systems can be made by "deposition" techniques—various materials (reactants) are introduced above a substrate, and made to react to form the ceramic on the substrate. This process borrows techniques from the semiconductor industry and is very useful for making ceramic coatings.

The term sintering refers to the process of heating a material at a temperature below its melting point, so that the particles adhere to one another. In a sintering-based approach, the object (called a "green body") that is prepared from a powder is initially held together loosely, but it is hardened by baking in a kiln. The pores in the object close up, so that the body shrinks and is converted to a denser, stronger product. There is virtually always some porosity left, but the real advantage of this method is that the green body can be produced in a wide variety of ways and then sintered.

Slurry can be used in place of a powder, then cast into a desired shape, dried, and sintered. This approach is used for traditional pottery, in which a plastic mixture is worked by hand.

When a mixture of different materials is used to form a ceramic, the sintering temperature is sometimes above the melting point of a minor component, leading to "liquid phase" sintering. In this case, the sintering time is shorter than for solid phase sintering.