Graphite is one of the two common but distinctively different forms or allotropes of carbon, the other being diamond. Graphite holds the distinction of being the most stable form of solid carbon ever discovered. It may be considered the highest grade of coal, just above anthracite, although it is not normally used as fuel because it is hard to ignite.

Graphite was given its name by Abraham Gottlob Werner in 1789, from the Greek word γραφειν (graphein), which means "to draw or write." He selected the word based on the use of this allotrope in pencils. 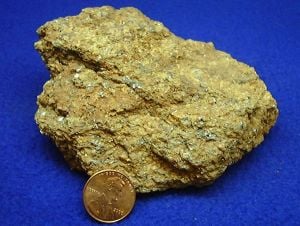 Associated minerals with which graphite commonly occurs include: quartz, calcite, micas, iron meteorites, and tourmalines. In 2005, China was the top producer of graphite with about 80 percent of the world share followed by India and Brazil.

Other characteristics: thin flakes of graphite are flexible but inelastic; the mineral can leave black marks on hands and paper; it conducts electricity; and it displays superlubricity. Best field indicators are softness, luster, density and streak.

Each carbon atom is covalently bonded to three other surrounding carbon atoms. The flat sheets of carbon atoms are bonded into hexagonal structures. These exist in layers, which are not covalently connected to the surrounding layers. Instead, different layers are connected together by weak forces called van der Waals forces much like those of mica. 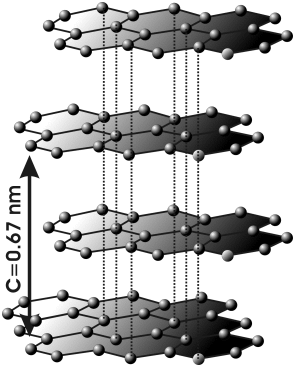 Each carbon atom possesses a sp² orbital hybridisation. The pi orbital electrons delocalized across the hexagonal atomic sheets of carbon contribute to graphite's conductivity. In an oriented piece of graphite, conductivity parallel to these sheets is greater than that perpendicular to these sheets.

The bond between the atoms within a layer is stronger than the bond of diamond, but the force between two layers of graphite is weak. Therefore, layers of it can slip over each other making it soft.

The acoustic and thermal properties of graphite are highly anisotropic, since phonons propagate very quickly along the tightly-bound planes, but are slower to travel from one plane to another.

Graphite and graphite powder, is valued for industrial applications, for its self-lubricating and dry lubricating properties. There is a common belief that graphite's lubricating properties are solely due to the loose interlamellar coupling between sheets in the structure. However, it has been shown that in a vacuum environment (such as in technologies for use in space), graphite is a very poor lubricant. This observation led to the discovery that the lubrication is due to the presence of fluids between the layers, such as air and water, which are naturally adsorbed from the environment. This molecular property is unlike other layered, dry lubricants such as molybdenum disulfide. Recent studies suggest that an effect called superlubricity can also account for graphite's lubricating properties.

The use of graphite is limited by its tendency to facilitate pitting corrosion in some stainless steels, and to promote galvanic corrosion between dissimilar metals (due to its electrical conductivity). It is also corrosive to aluminum in the presence of moisture. For this reason, the US Air Force banned its use as a lubricant in aluminum aircraft,[2] and discouraged its use in aluminum-containing automatic weapons.[3] Even graphite pencil marks on aluminum parts may facilitate corrosion.[4]

Another high-temperature lubricant, hexagonal boron nitride, has the same molecular structure as graphite. It is sometimes called white graphite, due to its similar properties.

When a large number of crystallographic defects bind these planes together, graphite loses its lubrication properties and becomes what is known as pyrolytic carbon. This material is useful for blood-contacting implants such as prosthetic heart valves. It is also highly diamagnetic, thus it will float in mid-air above a strong magnet.

Natural and crystalline graphites are not often used in pure form as structural materials, due to their shear-planes, brittleness, and inconsistent mechanical properties.

Graphite is the substance used as the marking material ("lead") in common pencils.

Intumescent or expandable graphites are used in firestops, particularly plastic pipes and gaskets, fitted around the perimeter of a fire door. During a fire, the graphite expands and chars to resist fire penetration and reduce the likelihood of the spread of fire and fumes. A typical start expansion temperature (SET) is between 150 and 300 degrees Celsius.

Carbon fiber and carbon nanotubes are also used in carbon fiber reinforced plastics, and in heat-resistant composites such as reinforced carbon-carbon (RCC). Products made from carbon fiber graphite composites include fishing rods, golf clubs, and bicycle frames, and have been successfully employed in reinforced concrete. The mechanical properties of carbon fiber graphite-reinforced plastic composites and grey cast iron are strongly influenced by the role of graphite in these materials. In this context, the term "(100 percent) graphite" is often loosely used to refer to a pure mixture of carbon reinforcement and resin, while the term "composite" is often used for composite materials that include not only carbon reinforcement and resin but also additional ingredients. [5]

Graphite also finds use as a matrix and neutron moderator within nuclear reactors. Its low neutron cross section also recommends it for use in proposed fusion reactors. Care must be taken that reactor-grade graphite is free of neutron absorbing materials such as boron, widely used as the seed electrode in commercial graphite deposition systems—this caused the failure of the Germans' World War II graphite-based nuclear reactors. Since they could not isolate they were forced to use far more expensive heavy water moderators. Graphite used for nuclear reactors is often referred to as Nuclear Graphite.

Graphite has been used in at least three radar absorbent materials. It was mixed with rubber in Sumpf and Schornsteinfeger, which were used on U-boat snorkels to reduce their radar cross section. It was also used in tiles on early F-117 Nighthawks.

One industrial form of processing the mineral graphite is through the milling process. In that process graphite is ground to a fine powder for use as a slurry in oil drilling; in zirconium silicate, sodium silicate and isopropyl alcohol coatings for foundry molds; and for calcium petroleum coke, which is used as a recarbonizer in the steel industry (Earth Metrics, 1989). Rough graphite is typically ground and packaged at a graphite mill; often the more complex formulations are also mixed and packaged at the mill facility. Environmental impacts from graphite mills consist of air pollution including fine particulate exposure of workers and also soil contamination from powder spillages leading to heavy metals contaminations of soil. Dust masks are normally worn by workers during the production process to avoid worker exposure to the fine airborne graphite and zircon silicate.

Retrieved from https://www.newworldencyclopedia.org/p/index.php?title=Graphite&oldid=1057831
Categories:
Hidden category:
This page was last edited on 19 September 2021, at 19:59.
Content is available under Creative Commons Attribution/Share-Alike License; additional terms may apply. See Terms of Use for details.