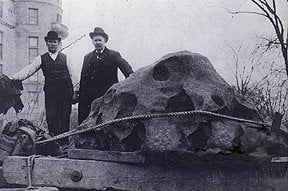 The Willamette Meteorite, the largest ever to be found in the United States

A meteorite is a small extraterrestrial body that impacts the Earth's surface. While in space they are called meteoroids, and while falling through Earth's atmosphere they are called meteors. Most of them were small asteroids, approximately boulder-sized or less. Some meteorites have come from the Moon and Mars. When it enters the atmosphere, air resistance causes the body to heat up and emit light, thus forming a fireball or shooting star. More generally, meteorites fall on every solid planetary body, creating craters such as those on the Moon. Meteorites are so far the most important materials for studying planetary science.

79 percent of meteorites are chondrites - balls of mafic minerals with small grain size, indicative of rapid cooling. In most chondrites, small spherules called chondrules can be found. Chondrites are typically about 4.6 billion years old and are thought to represent material from the asteroid belt. There are different models to explain how chondrules formed. Carbonaceous chondrites, some of which are thought to be unaltered solar nebula material, constitute about five percent of meteorites and contain small amounts of organic materials, including amino acids. Also, presolar grains are identified in carbonaceous chondrites. The isotope ratios of carbonaceous chondrites are similar to those of the Sun.

Meteorites are classified according to their structure and mineral composition. The three main classes of meteorite are stones, stony irons, and irons. Each chondrite is described using the following two-character group name and a petrologic type. Starting from the most primitive type 3, decreasing numbers (2~1) indicate higher degrees of aqueous alteration, and increasing numbers (4~7) indicate degrees of thermally metamorphism. 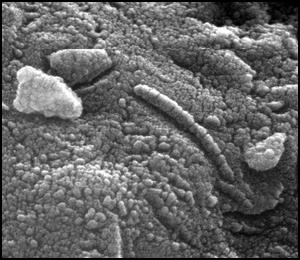 Possible fossils of bacteria inside a Martian meteorite ALH84001