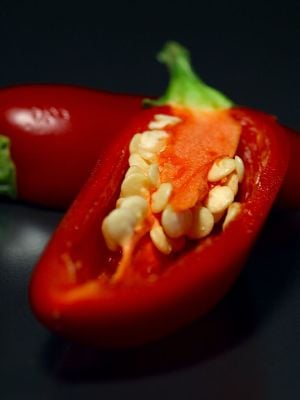 A ripe red jalapeno cut open to show the seeds.

A seed is the ripened ovule of gymnosperm or angiosperm plants. In angiosperms, or flowering plants, the ovule is found within an ovary, which becomes fruit. In conifers and other similar plants known as gymnosperms, the ovules are borne on the surface of an ovuliferous (ovule-bearing) scale, usually within a cone, and are not enclosed.

The importance of the seed relative to more primitive forms of reproduction and dispersal is attested to by the success of these two groups of plants in dominating the landscape.

Seeds sometimes take on symbolic value, whether it be the imagery of a tiny entity growing into a mighty oak tree, conveying hope in trying times (just as a seed, lying dormant through winter, sprouts in the spring), or in representing the kingdom of God in Jesus' parable of the mustard seed (Matthew 13:31-32). In Marxist-Leninist ideology, the germination of a seed (as well as the emergence of a chick from an egg) is used in support of dialectical materialism, demonstrating the view that development takes place through conflict, in this case between the embryo and the seed coat. However, in actuality, the embryo and its seed coat (as well as the seed itself and its external environment), exhibit a cooperative relationship. The seed coat provides protection for the embryo until the time is right for germination, with the nature of the seed coat determining how rapidly the water can penetrate as part of this process.

A fertilized seed contains the embryo, a multicellular diploid eukaryote in its earliest stage of development, from which a new plant will grow under proper conditions. It also contains a supply of stored food and is wrapped in the seed coat or testa.

In angiosperms, the stored food begins as a tissue called the endosperm, which is derived from the parent plant via double fertilization. The usually triploid endosperm (containing three sets of chromosomes) is rich in oil or starch and protein.

In gymnosperms, such as conifers, the food storage tissue is part of the female gametophyte, a haploid tissue.

In some species, the embryo is imbedded in the endosperm, which the seedling will use upon germination. In others, the endosperm is absorbed by the embryo as the latter grows within the developing seed, and the cotyledons of the embryo become filled with this stored food. At maturity, seeds of these species have no endosperm. Some common plant seeds that lack an endosperm are bean, pea, oak, walnut, squash, sunflower, and radish. Plant seeds with an endosperm include all conifers and most monocotyledons (e.g., grasses and palms), and many dicotyledons (e.g. brazil nut and castor bean). 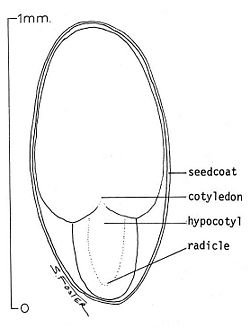 In order for the seed coat to split, the embryo must imbibe (soak up water), which causes it to swell, splitting the seed coat. However, the nature of the seed coat determines how rapidly water can penetrate and subsequently initiate germination. For seeds with a very thick coat, scarification of the seed coat may be necessary before water can reach the embryo. Examples of scarification include gnawing by animals, freezing and thawing, battering on rocks in a stream bed, or passing through an animal's digestive tract. In the latter case, the seed coat protects the seed from digestion, while perhaps digestion weakens the seed coat such that the embryo is ready to sprout when it gets deposited (along with a bit of fertilizer) far from the parent plant. In species with thin seed coats, light may be able to penetrate into the dormant embryo. The presence of light or the absence of light may trigger the germination process, inhibiting germination in some seeds buried too deeply or in others not buried in the soil. Abscisic acid, a natural occurring compound in plants, is responsible for inducing seeds to synthesize storage proteins and plays a role in induction and maintenance of dormancy. It is usually the growth inhibitor in seeds.

The seeds of angiosperms are contained in a hard or fleshy (or with layers of both) structure called a fruit. An example of a hard fruit layer surrounding the actual seed is that of the so-called stone fruits (such as the peach). Gymnosperm seeds begin their development "naked" on the bracts of cones, although the seeds do become covered by the cone scales as they develop.

Unlike animals, plants are limited in their ability to seek out favorable conditions for life and growth. As a consequence, plants have many ways to disperse and spread the population through their seeds. A seed must somehow "arrive" at a location and be there at a time favorable for germination and growth. Those properties or attributes that promote the movement of the next generation away from the parent plant may involve the fruit more so than the seeds themselves. The function of a seed is one of serving as a delaying mechanism: a way for the new generation to suspend its growth and allow time for dispersal to occur or to survive harsh, unfavorable conditions of cold or dryness, or both.

In many, if not most cases, each plant species achieves success in finding ideal locations for placement of its seeds through the basic approach of producing numerous seeds. This is certainly the approach used by plants, such as ferns, which disperse by spores. However, seeds involve a considerably greater investment in energy and resources than do spores, and the payoff must come in achieving similar or greater success with fewer dispersal units.

Hypocotyl is a botanical term for a part of a germinating seedling of a seed plant. As the plant embryo grows at germination, it sends out a shoot called a radicle that becomes the primary root and penetrates down into the soil. After emergence of the radicle, the hypocotyl emerges and lifts the growing tip (usually including the seed coat) above the ground, bearing the embryonic leaves (called cotyledons in flowering plants and gymnosperms) and the plumule that gives rise to the first true leaves. The hypocotyle is the primary organ of extension of the young plant and develops into the stem.

The early development of a monocot seedling like cereals and other grasses is somewhat different. A structure called the coleoptile, essentially a part of the cotyledon, protects the young stem and plumule as growth pushes them up through the soil. A mesocotyl—that part of the young plant that lies between the seed (which remains buried) and the plumule—extends the shoot up to the soil surface, where secondary roots develop from just beneath the plumule. The primary root from the radicle may then fail to develop further. The mesocotyl is considered to be partly hypocotyl and partly cotyledon.

Not all monocots develop like the grasses. The onion develops in a manner similar to the first sequence described above, the seed coat and endosperm (stored food reserve) pulled upwards as the cotyledon extends. Later, the first true leaf grows from the node between the radicle and the sheath-like cotyledon, breaking through the cotyledon to grow past it.

In some plants, the hypocotyl becomes enlarged as a storage organ. Examples include Cyclamen and Gloxinia, two genuses within the plant kingdom.

The oldest Carbon-14 dated seed that was germinated into a viable plant was an approximately 2,000 year old Date Palm seed, recovered from excavations at Herod the Great's palace on Masada in Israel—this Judean date palm seed was germinated in 2005.

There is a persistent myth that seeds from Egyptian tombs with ages of over 3000 years were viable. The myth was reportedly started by scam artists selling "miracle seed" designed to capitalize on European Egyptomania of the 1800s. In 1897, the claims were tested by the British Museum's director of Egyptian antiquities, Wallis Budge. Wallis provided genuine 3,000 year old tomb-seeds to the Royal Botanic Gardens, Kew to plant under controlled conditions. The test resulted in none germinating.