There are around two-hundred thousand species within this group, making it the larger of the two traditional angiosperm groups. However, the dicotyledons no longer are regarded as a "good" group, and the names "dicotyledons" and "dicots" have fallen into disfavor in a taxonomic sense. That is because current systems of biological classification emphasize evolutionary relatedness, analogous to the importance often placed on lineage and family relationships in human societies. The dicots are not seen as a group that contains all the descendants of a common ancestor.

The vast majority of the former dicots, however, do form a monophyletic group called the eudicots or tricolpates. These may be distinguished from all other flowering plants by the structure of their pollen. Eudicots have tricolpate pollen, or forms derived from it, involving the pollen having three or more pores set in furrows called colpi—other dicotyledons and monocotyledons have monosulcate pollen, or derived forms.

As a member of the angiosperms or flowering plants, dicots (and monocots) bear their reproductive organs in a structure called a flower and cover their seeds by including them in a true fruit. (The ovule is enclosed within a carpel, the female reproductive organ of a flower, which will lead to a fruit.) Angiosperms are a major group of land plants, with two-hundred fifty thousand species, and are one of two groups in the seed plants. (The other seed plant group is gymnosperms, in which the ovule is not enclosed at pollination and the seeds are not in a true fruit.) 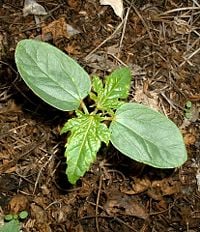 It is generally accepted that monocotyledons evolved from within the dicotyledons, and as such the latter form a paraphyletic group (one is which the group contains its most recent common ancestor, but does not contain all the descendants of that ancestor; in this case, it does not include the monocots). The vast majority of dicots, however, form a monophyletic group (one that does include all the descendants) called the eudicots or tricolpates. Eudicots comprise about 75 percent of all angiosperm species (Drinnan et al. 1994, Soltis and Soltis 2004).

From a diagnostic point of view, the number of cotyledons used to distinguish dicots and monocots is neither a particularly handy (as they are only present for a very short period in a plant's life), nor totally reliable character.

Flowers: In monocots, flowers are trimerous (number of flower parts in a whorl in threes), while in dicots the flowers are tetramerous or pentamerous (flower parts are in multiples of fours or fives).

Pollen: In monocots, pollen has one furrow or pore, while dicots have three.

Seeds: In monocots, the embryo has one cotyledon, while the embryo of the dicot has two.

Stems: In monocots, vascular bundles in the stem are scattered; in dicots, they are arranged in a ring.

Roots: In monocots, roots are adventitious (developing on a part other than the radical, such as on stems and leaves); in dicots, they develop from the radicle (primary root and its lateral roots). 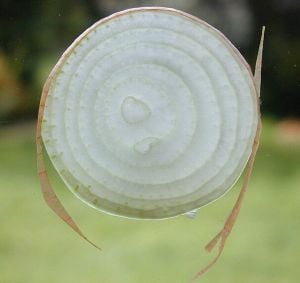 Leaves: In monocots, the major leaf veins are parallel, while in dicots they are reticulate.

This is a broad sketch only, not invariably applicable, as there are a number of exceptions. Many early-diverging dicot groups have "monocot" characteristics such as scattered vascular bundles, trimerous flowers, and non-tricolpate pollen. In addition, some monocots have "dicot" characteristics such as reticulated leaf veins. When monocots are compared to eudicots, the differences are more concrete.

Traditionally the dicots have been called the Dicotyledones (or Dicotyledoneae), at any rank. If treated as a class, as in the Cronquist system, they may be called the Magnoliopsida after the type genus Magnolia. In some schemes, the eudicots are treated as a separate class, the Rosopsida (type genus Rosa), or as several separate classes. The remaining dicots (palaeodicots) may be kept in a single paraphyletic class, called Magnoliopsida, or further divided.

The following lists are of the orders formerly placed in the dicots, giving their new placement in the Angiosperm Phylogeny Group System (APG-system) and that under the older Cronquist system, which is still in wide use.