Pea refers to the plant Pisum sativum, as well as its small, edible, round seed or the pod (fruit) in which the seed grows. Pisum sativum was one of the first plants cultivated by humans and remains an important food crop today. This species is a member of the legume family, Fabaceae, along with beans and peanuts.

Some other species belonging to the legume family (also called the "pea family") are also called peas, including the chickpea or garbanzo bean, Cicer arietinum, and the cowpea or black-eyed pea, Vigna unguiculata.

Through a symbiotic relationship with nitrogen-fixing bacteria, peas play a role in the conversion of atmospheric nitrogen into a form that plants can utilize. This harmonious, mutually beneficial relationship between diverse species is also utilized in agriculture for the replenishing of soils depleted of nitrogen due to the planting of non-leguminous crops.

The pea plant is an annual herb and can be a bush or vine depending on the variety. As it grows quickly, the stems are slender and small in diameter. They grow to a length of 30 to 150 cm (1 to 5 feet). The pea plant can tolerate frost and can therefore sprout in the early spring. The flowers are white, pink, or purple and blossom sequentially starting from the bottom of the plant. Cultivated peas are self-pollinating. The fruits, called "pods," each contain 2 to 10 seeds, called "peas" (Muehlbauer 1997). 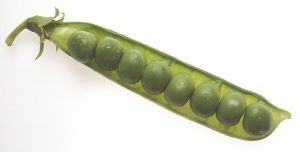 The pea is native to western Asia and North Africa. Wild peas can still be found in Afghanistan, Iran, and Ethiopia (Oelke 1991). They seem to have been first cultivated at the beginning of agriculture in the Middle East, perhaps as long as 10,000 years ago. By 4,000 years ago, pea cultivation had spread throughout Europe and east into India. By the first century C.E., peas were introduced to China and soon after 1492, to the New World (Muehlbauer 1997).

Pea plants require cool weather. They do not do well when the temperature rises above 27°C (81°F). On the other hand, they can endure temperatures at the freezing point or somewhat below. If frost injury does occur and the main shoot is killed, new shoots will originate from nodes below the soil surface (Oelke 1991). In some places, peas are planted in fall and grow through the winter and in others they are planted in early spring.

Pea cultivation, like the cultivation of other legumes, adds nitrogen to the soil and is often done as part of systems of crop rotation.

Since 1980, the world production of peas has been generally increasing. In 2000, Canada produced about half of the world's pea crop with France, China, and Russia the next largest producers.

The two largest uses of peas are for human food and animal feed. In Europe, most peas are used to feed animals (AEP 2006).

Some of the reasons the pea has remained popular are that it matures early and can grow in cold, semi-arid conditions. Over the centuries, different varieties have been developed for different uses and in many places various institutions are working on future improved varieties (Hernández Bemejo 1992). 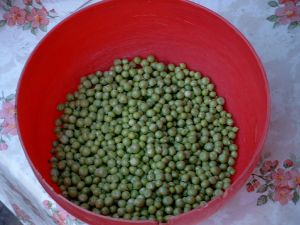 Both the round seed and the pod with the seed are consumed as part of the diet.

In early times, peas were grown mostly for their dry seeds. Along with broad beans and lentils, these formed an important part of the diet of most people in Europe during the Middle Ages (Bianchini 1975). By the 1600s and 1700s, it became popular to eat peas "green"; that is, while they are immature and right after they are picked. This was especially true in France and England, where the eating of green peas was said to be "both a fashion and a madness" (OSU 2006). New varieties of peas were developed by the English during this time that became known as "garden peas" and "English peas." The popularity of green peas spread to North America. Thomas Jefferson grew more than 30 varieties of peas on his estate (Kafka 2005). With the invention of canning and freezing of foods, green peas became available year-round, not just in spring as previously.

Peas are a good source of carbohydrates and protein, as well as iron and vitamins B and C.

Fresh peas are often eaten boiled and flavored with butter or spearmint as a side dish vegetable. Fresh peas are also used in pot pies, salads, and casseroles. Pod peas (particularly sweet varieties called mangetout and sugar peas) are used in stir fried dishes. Pea pods do not keep well once picked, and if not used quickly are best preserved by drying, canning, or freezing within a few hours of harvest. 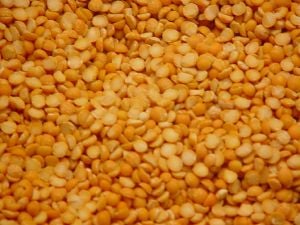 Dried peas are often made into a soup or simply eaten on their own. In Japan and other East Asian countries, including Thailand, Taiwan, and Malaysia, the peas are roasted and salted, and eaten as snacks. In the United Kingdom, marrowfat peas are used to make pease pudding (or "pease porridge"), a traditional dish. In North America, a traditional dish is split pea soup, made from dried peas.

In the United Kingdom, dried, re-hydrated, and mashed marrowfat peas, known by the public as mushy peas, are popular, originally in the north of England but now ubiquitously, as an accompaniment to fish and chips or meat pies.

Processed peas are mature peas that have been dried, soaked, and then heat treated (processed) to prevent spoilage—in the same manner as pasteurizing.

Cooked peas are sometimes sold dried and coated with wasabi as a spicy snack.

Pioneer geneticist Gregor Mendel discovered some of the basic principles of genetics by studying how the traits of pea plants are passed down generation to generation. 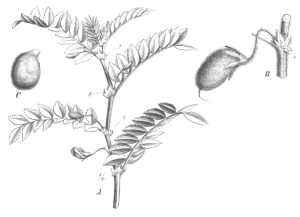 The plant is 20 to 50 cm high (8 to 20 inches) and has small feathery leaves on both sides of the stem. One seedpod contains two or three peas. The flowers are white or reddish-blue. Chickpeas need a subtropical or tropical climate and more than 400 mm (16 inches) annual rain. They can be grown in a temperate climate, but yields will be much lower.

The wild ancestor of cultivated chickpeas is thought to be Cicer reticulatum. As this only grows in southeast Turkey, this is likely the first place they were cultivated.

Today, chickpeas are the third most important food legume worldwide, with 95 percent of production and consumption occurring in developing countries. In 2004, India produced 64 percent of the global chickpea crop, with Turkey, Pakistan, and Iran the next three largest producers (ICRISAT).

Chickpeas are one of the most nutritious of the dry edible legumes, containing 23 percent protein, 64 percent total carbohydrates, 47 percent starch, 5 percent fat, 6 percent crude fiber, 6 percent soluble sugar, and 3 percent ash. They are also good sources of the minerals phosphorus, calcium, magnesium, iron, and zinc. Chickpea protein digestibility is the highest among the dry edible legumes. They are also a good source of unsaturated fatty acids, primarily linoleic and oleic acids (ICRISAT) .

In Europe and North America, chickpeas are most often cooked and eaten whole in various dishes, while in the Middle East and India they are most often ground into flour and made into a paste or baked into bread (Hernández Bermejo 1992). 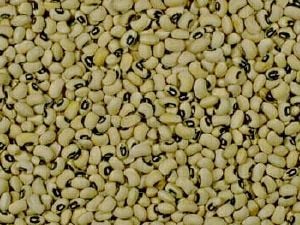 The cowpea (Vigna unguiculata) is native to the New World and is cultivated in the semi-arid tropics covering Asia, Africa, southern Europe, and Central and South America. Four cultivated subspecies are recognized:

A drought tolerant and warm weather crop, cowpeas are well-adapted to the drier regions of the tropics, where other food legumes do not perform well. It also fixes atmospheric nitrogen and grows well in poor soils with more than 85 percent sand and with less than 0.2 percent organic matter and low levels of phosphorus. In addition, it is shade tolerant, and therefore, useful as an intercrop with maize, millet, sorghum, sugarcane, and cotton. This makes cowpeas an important component of traditional intercropping systems, especially in the subsistence farming systems of the dry savannas in sub-Saharan Africa.

Over 90 percent of the world's cowpea crop is grown in West Africa, with Nigeria, Niger, and Mali the biggest growers (IITA 2006), while the black-eyed pea is a traditional favorite in the southern United States and the yardlong bean a favorite in southeast Asia.