“to promote world peace and friendship through a Peace Corps, which shall make available to interested countries and areas men and women of the United States qualified for service abroad and willing to serve, under conditions of hardship if necessary, to help the peoples of such countries and areas in meeting their needs for trained manpower.”

Countries that the Peace Corps currently works in (orange) and has worked in previously (purple). (See picture details for countries that are unhighlighted.)

The Peace Corps works in over 70 countries around the world. Peace Corps volunteers work with governments, schools, non-profit organizations, non-government organizations, and entrepreneurs in the areas of education, health, HIV/AIDS, business, information technology, agriculture, and the environment.

The program officially has three goals:

The Peace Corps works by first announcing its availability to foreign governments. These governments determine areas in which the organization can be involved. The organization then matches the requested assignments to its pool of applicants and sends those volunteers with the appropriate skills to the countries that first made the requests. 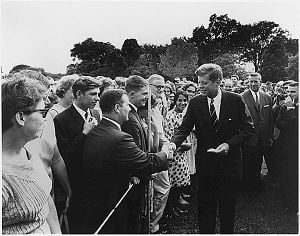 Only in 1959, however, did the proposal for a national program of service abroad first receive serious attention in Washington when Congressman Henry S. Reuss of Wisconsin advanced the ideas of a “Point Four Youth Corps.” In 1960, he and Senator Richard L. Neuberger of Oregon introduced identical measures calling for a nongovernmental study of the “advisability and practicability” of such a venture. Both the House Foreign Affairs Committee and the Senate Foreign Relations Committee endorsed the idea of a study, the latter writing the Reuss proposal into the Mutual Security legislation then pending before it. In this form it became law in June 1960. In August the Mutual Security Appropriations Act was enacted, making available $10,000 for the study, and in November ICA contracted with the Maurice Albertson, Andrew E. Rice, and Pauline E. Burkey of Colorado State University Research Foundation to make the study.[4]

John F. Kennedy first announced his own idea for such an organization during the 1960 presidential campaign at a late-night speech at the University of Michigan in Ann Arbor on October 14. During a later speech in San Francisco, California on November 1, he dubbed this proposed organization the "Peace Corps." Critics of the program (including Kennedy's opponent, Richard M. Nixon) claimed the program would be nothing but a haven for draft dodgers. Others doubted whether college-age volunteers had the necessary skills. The idea was popular among college students, however, and Kennedy continued to pursue it, asking respected academics such as Max Millikan and Chester Bowles to help him outline the organization and its goals. During his inaugural address, Kennedy again promised to create the program: "And so, my fellow Americans: ask not what your country can do for you—ask what you can do for your country."[5] 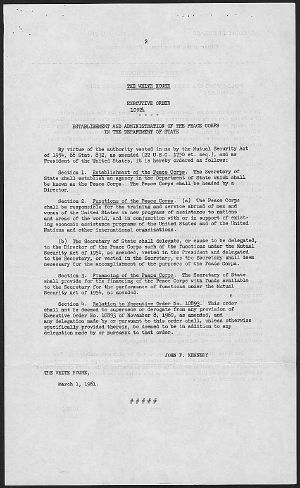 On March 1, 1961, Kennedy signed an Executive Order 10924 that officially started the Peace Corps. Concerned with the growing tide of revolutionary sentiment in the Third World, Kennedy saw the Peace Corps as a means of countering the notions of the "Ugly American" and "Yankee imperialism," especially in the emerging nations of post-colonial Africa and Asia. [6] [7]

On March 4, Kennedy appointed his brother-in-law Sargent Shriver to be the program's first director. Shriver was tasked with fleshing out the organization, which he did with the help of Warren W. Wiggins and others. Shriver and his think tank outlined the three major goals of the Peace Corps and decided the number of volunteers they needed to recruit. The program began recruiting volunteers the following July.

Until about 1967, applicants to the Peace Corps had to pass a placement test that tested "general aptitude" (knowledge of various skills needed for Peace Corps assignments) and language aptitude. After an address from Kennedy, who was introduced by Rev. Russell Fuller of Memorial Christian Church, Disciples of Christ, on August 28, 1961, the first group of volunteers left for Ghana and Tanzania. The program was formally authorized by Congress on September 22, 1961, and within two years over 7,300 Peace Corps volunteers were serving in 44 countries. This number would jump to 15,000 in June of 1966, the largest number in the organization's history.

The organization experienced major controversy in its first year of operation. On October 13, 1961, a postcard was written by a volunteer named Margery Jane Michelmore in Nigeria to a friend in the U.S. She described her situation in Nigeria as "squalor and [of] absolutely primitive living conditions."[8][9] However, this postcard never made it out of the country.[9] The Ibadan University College Students Union demanded deportation and accused the volunteers of being "America's international spies" and the project as "a scheme designed to foster neocolonialism."[10] Soon the international press picked up the story and this led several people in the U.S. administration to question the future of the program as a whole.[11] Nigerian students protested the program, and the American volunteers sequestered themselves and eventually began a hunger strike.[9] After several days, the Nigerian students agreed to open a dialogue with the Americans. 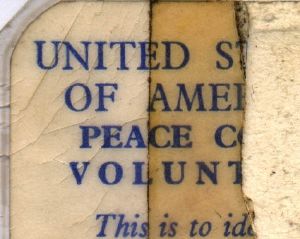 The effect of the Peace Corps at this time was minimal. By 1966, more than 15,000 volunteers were working in the field, the largest number in the Peace Corps' history.[4] In July 1971, President Richard Nixon, an opponent of the program, brought the Peace Corps under the umbrella agency ACTION. President Jimmy Carter, an advocate of the program, said that his mother, who had served as a nurse in the program, had "one of the most glorious experiences of her life" in the Peace Corps.[12] In 1979, he declared it fully autonomous in an executive order. This independent status would be further secured when Congress passed legislation in 1981 to make the organization an independent federal agency. Trainees swear in as volunteers in Mauritania in September 2007.

At this time, the Peace Corps began branching out past its traditional concerns of education- and agriculture-related projects. In 1982, President Reagan appointee director Loret Miller Ruppe initiated several new business-related programs. For the first time, a large number of conservative and Republican volunteers joined the contingent of overseas volunteers, and the organization continued to reflect the evolving political and social conditions in the United States.

After the September 11, 2001, attacks alerted the nation to growing anti-U.S. sentiment in the Middle East, President George W. Bush pledged to double the size of the organization within five years as a part of the War on Terrorism. For the 2004 fiscal year, Congress passed a budget of $325 million, $30 million above that of 2003 but $30 million below the President's request.

The Peace Corps intended to double the number of volunteers it sent abroad by 2007 in accordance with President Bush's request in 2002. According to Joseph Kennedy, "The American reputation has taken a hit in the last couple of years. The need for the Peace Corps couldn't be more urgent. The Peace Corps shows what is best in America, the generosity of spirit." The Peace Corps is trying to get more diverse volunteers of different ages. This is important so that the Peace Corps can look, according to former director Gaddi Vasquez, "more like America." An article published by the Harvard International Review in 2006 argues that the time has come not only to expand the Peace Corps but also to revisit its mission and equip it with new technology to transform it into a twenty-first-century engine for peace through the global sharing of knowledge.

In 1961 only one percent of volunteers were over 50, compared with six percent today. Peace Corps spokesperson Gretchen Learman states, "Age is no barrier to joining the Peace Corps. In many cases, it's an asset, since senior volunteers bring so much knowledge to their work."[13] Married couples are welcome and can work together.

This change is the result of an ongoing effort by the Peace Corps to better define the work of its volunteers. The change to Peace Corps Response will allow Peace Corps to broaden their approach to their five programming areas to include projects that do not necessarily rise to the level of a "crisis."

The program sends former Peace Corps volunteers to foreign countries to take on short-term, high-impact assignments that typically range from three to six months in duration.

Peace Corps Response volunteers generally receive the same allowances and benefits as their Peace Corps counterparts, including round-trip transportation, living and readjustment allowances, and medical care. Minimum qualifications for Crisis Corps volunteers include completion of at least one year of Peace Corps service, excluding training, in addition to medical and legal clearances.

The Crisis Corps title will be retained as a unique branch within Peace Corps Response, designed for volunteers who are deployed to true “crisis” situations, such as disaster relief following hurricanes, earthquakes, floods, volcanic eruptions and other catastrophes.

Directors of the Peace Corps

Peace Corps in the Media

Books about the Peace Corps

Hundreds of Returned Peace Corps volunteers have written books about their countries of service[17] but five books that are among the most notable for capturing the positive and the negative of the Peace Corps experience are the following:

Documentary Films about the Peace Corps

The Peace Corps has been the subject of the following documentary films: