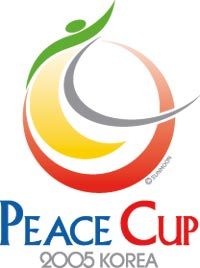 The Peace Cup is a football (soccer) tournament held every two years in South Korea. The eight-team event, began in 2003, capitalizing on South Korea's stunning performance at the 2002 World Cup, which had been co-hosted by South Korea and Japan. A corresponding women's tournament called the Peace Queen Cup was initiated in 2006 to be held on alternate years.

The Sunmoon Peace Football Foundation (SPFF) was founded by Reverend Sun Myung Moon, the leader of the Unification Church, who inspired the Peace Cup as a means to promote world peace and encourage professional teams to serve their communities. All profits from the tournament were to be used to sponsor the Play Soccer Make Peace program,[1] organized by the World Association for Non-Governmental Organizations (WANGO), which holds youth soccer events in over 35 countries in the developing world.

In October 2012 it was announced that the Peace Cup would no longer be held, following the death of Unification Church founder Sun Myung Moon.

The idea of the Peace Cup came form Reverend Moon's love for soccer and his desire to use sports to promote world peace.[2] He first announced the tournament in Seoul, Korea on June 12, 2002 at the Arts Center of the Little Angels School, in a speech titled "The Role of Sports in Creating World Peace".[3] "The Sun Moon Peace Cup will not only celebrate a healthy spirit of humanity," he noted, "It will be a place where people unite in one mind, as one family, and in one heart, to open the way toward God's ideal of creation, a world of peace, freedom and happiness."

Reverend Moon had previously been involved in sponsoring soccer teams in Korea, including the highly successful professional team Seongnam Ilhwa Chunma, as well as professional teams in Brazil—Cene and Atletico Sorocaba.

Brazilian star Pele was a consultant, together with his company Pele Productions, in the initial planning of the first Peace Cup and spent time with the founder of the event in Irvington, New York in 2002. Although he was unable to convince the Brazilian team Sao Paulo to attend the inaugural event, Uruguay's Nacional did participate. Pele attended the final game of the 2003 Peace Cup and said at the time: "When you mention the word 'peace,' when you are trying to bring peace in the world, I will always be there. I've worked for UNESCO and UNICEF and kids all over the world."[4]

From 2003 to 2007, the Peace Cup was played between eight clubs, divided into two groups of four teams. The winner of each group qualified for the final, which was played in a single match. 2009 Peace Cup Andalucia was held in Spain, and 12 teams participated in the competition.

The fifth competition took place in South Korea in July 2012. In October 2012 it was announced that the Peace Cup will no longer be held, following the death of Unification Church founder Sun Myung Moon.

Besides the championship trophy, three awards are presented: the Fair Play award to the team finishing first in the fair play judging; the Golden Shoe to the top goal scorer; and the Golden Ball, to the tournament's most valuable player in a vote by the attending media. 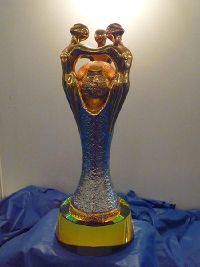 Following the championship game at the 2005 event a check for US $1 million was presented by Reverend Moon to the World Association for Non-Governmental Organizations (WANGO) to promote the Play Soccer Make Peace program.

The Peace Cup Trophy and Emblem

The message of the tournament is captured in the championship trophy image of three figures who, desiring to bring peace to the world, together hold the earth between them and leap skyward. The height of the trophy is 36 cm with its breadth being 12 cm.

The emblem of the Peace Cup takes a motif composed of the sun, the moon, and a human being (see top). Together they form a human being exhilarated by football all over the world. The red as the sun expresses the passion of a human being. The yellow as the moon wishes the game would be played as a pure football festival of mankind, while the green represents a human being with arms stretched represents peace, the peace of mankind. It employs a strong will to unite people around the world into one, and create a peaceful world through football.

The 2003 event drew an average of 28,304 fans for the 12 opening round games, including 51,578 to the opening game at the Seoul World Cup Stadium between Seongnam and Turkish club Beşiktas. The final game saw 33,778 fans brave monsoon conditions at the Seoul World Cup Stadium to see Mark van Bommel score the lone goal as Dutch champion PSV Eindhoven downed French champion Lyon 1-0. PSV's Korean star Ji Sung Park, who later joined Manchester United, was named the 2003 MVP. The event was notable for the return of PSV coach Guus Hiddink to Korea where he had become a national hero after coaching the country's national team to the semifinals of the 2002 World Cup. Over 70 Korean reporters and 56 photographers followed Hiddink's moves at both the 2003 and 2005 events.

The 2005 event saw 62,000 watch the 2003 champion PSV Eindhoven beat Korean club Seongnam Ilhwa Chunma, 2-1, in the opening game at the World Cup Stadium. It was a stunning crowd considering that South Korea's professional league's average crowd per game in 2005 was just 11,552. The final game was won by English club Tottenham Hotspur when it downed 2003 runner up, French champion Lyon, 3-1 in the final at the Seoul World Cup Stadium. Tottenham's Robbie Keane was named the MVP after scoring two goals in the final game.

The 2007 Peace Cup Korea was held in South Korea between 12 July and 21 August 2007. Olympique Lyonnais defeated Bolton Wanderers 1–0 in the final on 21 July, to become the winner for the first time.

The 2009 Peace Cup Andalucia was the fourth edition of Peace Cup and was held in Spain from 24 July to 2 August in the cities of Madrid, Seville, Málaga, Jerez, and Huelva. It was the first time that the tournament has been hosted by a nation other than South Korea. The winners of the tournament were English side Aston Villa, who defeated Juventus of Italy in the final.

The fifth Peace Cup was held from July 19 to July 22, 2012 in Suwon, South Korea. The 2012 tournament featured some major changes compared to previous tournaments. The number of teams participating was reduced from eight to four. Therefore, the teams immediately began playing in sudden death mode. The draws for these pairings were decided via polls on the official website. Due to these changes, the tournament lasted only four days, rather than ten as in the previous tournaments. All matches were played in the Suwon World Cup Stadium. Hamburger SV defeated Seongnam Ilhwa Chunma in the final to win the tournament.

Retrieved from https://www.newworldencyclopedia.org/p/index.php?title=Peace_Cup&oldid=1088713
Categories:
This page was last edited on 23 November 2022, at 07:06.
Content is available under Creative Commons Attribution/Share-Alike License; additional terms may apply. See Terms of Use for details.