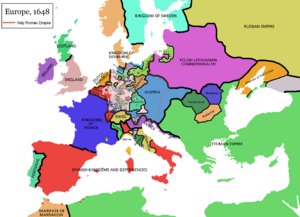 The Peace of Westphalia refers to the pair of treaties (the Treaty of Münster and the Treaty of Osnabrück) signed in October and May 1648 which ended both the Thirty Years' War and the Eighty Years' War. The treaties were signed on October 24 and May 15, 1648 and involved the Holy Roman Emperor Ferdinand III, the other German princes, Spain, France, Sweden and representatives from the Dutch republic. The Treaty of the Pyrenees, signed in 1659, ending the war between France and Spain, is also often considered part of the treaty.

The peace as a whole is often used by historians to mark the beginning of the modern era. Each ruler would have the right to determine their state's religion—thus, in law, Protestantism and Catholicism were equal. The texts of the two treaties are largely identical and deal with the internal affairs of the Holy Roman Empire.[1]

The Peace of Westphalia continues to be of importance today, with many academics asserting that the international system that exists today began at Westphalia. Both the basis and the result of this view have been attacked by revisionist academics and politicians alike, with revisionists questioning the significance of the Peace, and commentators and politicians attacking the "Westphalian System" of sovereign nation-states. The concept of each nation-state, regardless of size, as of equal legal value informed the founding of the United Nations, where all member states have one vote in the General Assembly. In the second half of the twentieth century, the democratic nation state as the pinnacle of political evolution saw membership of the UN rise from 50 when it was founded to 192 at the start of the twenty-first century. However, many new nations were artificial creations from the colonial division of the world, reflecting the economic interests of the colonizers rather than local cultural, ethnic, religious or other significant boundaries which serve as the foundation of cohesive societies.

The aspiration to become a sovereign nation-state so dominated the decolonization process that alternative possibilities, such as confederacy, were ignored. Westphalia, however, saw an end to countries as the personal possession of their monarchs and the beginning of respect for the territorial integrity of other nations. It did not, however, see the end of imperial expansion, since the European nations applied one rule to themselves and another to the peoples whom they encountered beyond Europe, whose territory could simply be appropriated, partitioned and exploited. Those who champion a more just sharing of the earth's resources and some form of global governance see the Westphalian nation-state as an obstacle; nations are reluctant to act except from self-interest and are disinclined to relinquish power to any external body, which is understood as undermining their sovereignty. In Europe, as the European Union evolves towards becoming a European government, member states resist this on the grounds that their sovereignty is threatened.

The peace negotiations were held in the cities of Münster and Osnabrück, which lie about 50 kilometers apart in the present-day German states of North Rhine-Westphalia and Lower Saxony. Sweden had favored Münster and Osnabrück while the French had proposed Hamburg and Cologne. In any case two locations were required because Protestant and Catholic leaders refused to meet each other. The Catholics used Münster, while the Protestants used Osnabrück. 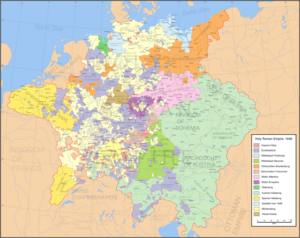 The power which Ferdinand III had taken for himself in contravention of the Holy Roman Empire's constitution was stripped, meaning that the rulers of the German states were again able to determine the religion of their lands. Protestants and Catholics were redefined as equal before the law, and Calvinism was given legal recognition.[2][3]

The main tenets of the Peace of Westphalia were:

There were also territorial adjustments:

The Peace of Westphalia is crucially important to modern international relations theory, with the Peace often being defined as the beginning of the international system with which the discipline deals.[5][4][6]

International relations theorists have identified the Peace of Westphalia as having several key principles, which explain the Peace's significance and its impact on the world today:

These principles are common to the way the dominant international relations paradigm views the international system today, which explains why the system of states is referred to as “The Westphalian System.”

The above interpretation of the Peace of Westphalia is not without its critics. Revisionist historians and international relations theorists argue against all of these points.

Rather than cementing sovereignty, revisionists hold that the treaty served to maintain the status quo ante. Instead, the treaty cemented the theory of Landeshoheit, in which state-like actors have a certain (usually high) degree of autonomy, but are not sovereign since they are subject to the laws, judiciary and constitution of a higher body.[12]

Modern views on the Westphalian System

The Westphalian System is used as a shorthand by academics to describe the system of states which the world is made up of today.[13]

In 1998 a symposium on the continuing political relevance of the Peace of Westphalia, then–NATO Secretary General Javier Solana said that "humanity and democracy [were] two principles essentially irrelevant to the original Westphalian order" and levied a criticism that "the Westphalian system had its limits. For one, the principle of sovereignty it relied on also produced the basis for rivalry, not community of states; exclusion, not integration."[14]

In 2000, then–German foreign minister Joschka Fischer referred to the Peace of Westphalia in his Humboldt Speech, which argued that the system of European politics set up by Westphalia was obsolete: "The core of the concept of Europe after 1945 was and still is a rejection of the European balance-of-power principle and the hegemonic ambitions of individual states that had emerged following the Peace of Westphalia in 1648, a rejection which took the form of closer meshing of vital interests and the transfer of nation-state sovereign rights to supranational European institutions."[15]

However, European nationalists and some American paleoconservatives such as Pat Buchanan hold a favorable view of the Westphalian state.[18][19] Supporters of the Westphalian state oppose socialism and some forms of capitalism for undermining the nation-state. A major theme of Buchanan's political career, for example, has been attacking globalization, critical theory, neoconservatism, and other philosophies he considers detrimental to today's Western nations.