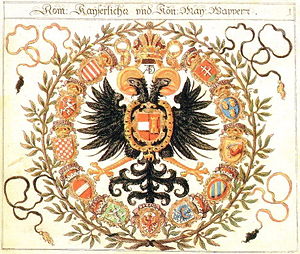 Coats of arms of a Habsburg Emperor showing the variety of his territories.

Habsburg (in English-speaking countries sometimes spelled Hapsburg, but never so in official use) was an important ruling house of Europe and is most well known to be the ruling House of Austria (and the Austrian Empire) for over six centuries. Through marriage, the family ruled approximately half of Europe. They were Holy Roman Emperors and one of the most powerful families in Europe.

Vienna, the elegant, artistic, and intellectually creative capital of the Habsburg was twice besieged by the Turks (1529 and 1683). On the latter occasion, the Emperor fled from the city. With custody of Bosnia and Herzegovina from 1878 following the Berlin Conference, the Habsburgs represented for many a buffer-zone between East and West; the Muslim and Christian worlds.

Loss of the Austro-Prussian War of 1866 resulted in the Austria-Hungarian Empire losing to its rival, Prussia, in leading German re-unification. Some suggest that had Austria won this contest, German history might have developed along less militaristic lines. Austria-Hungary was more pluralist and towards the end of its existence had embarked on a democratization program. It was the Assassination of Archduke Franz Ferdinand, heir to the Austrian-Hungarian throne, that sparked off the events that led to World War I and to the demise of the Habsburg monarchy. 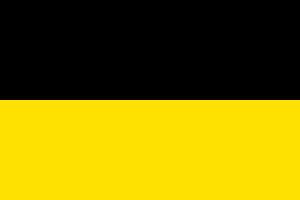 Flag of the Habsburg Monarchy; also used as the flag of the Austrian Empire until the Ausgleich of 1867.

Did you know?
The House of Habsburg was one of the most powerful families in Europe being Holy Roman Emperors and rulers of Austria (and the Austrian Empire) for over six centuries

From counts to Roman Emperors 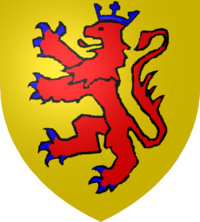 Coats of arms of early counts of Habsburg

The name is derived from the Swiss Habichtsburg (Hawk Castle), the family seat in the eleventh, twelfth, and thirteenth centuries at Habsburg, Switzerland in the former duchy of Swabia in present-day Switzerland. (Switzerland did not exist in its present form, and the Swiss lands were part of the mainly-Germanic Holy Roman Empire). From southwestern Germany (mainly Alsace, Breisgau, Aargau and Thurgau) the family extended its influence and holdings to the southeastern reaches of the Holy Roman Empire, roughly today's Austria (1278 - 1382).

In 1440, Frederick III was chosen by the Electoral College to succeed Albert II as the king. After several Habsburg kings had attempted to gain the imperial throne over the years, success finally arrived on 19 March 1452, when Pope Nicholas V crowned Frederick III as the Holy Roman Emperor in a grand ceremony held in Rome. After Frederick III's coronation, the Habsburgs were able to hold the imperial throne almost continuously for centuries, (1273 - 1291, 1298 - 1308, 1438 - 1740, and 1745 - 1806).

After the marriage of Maximilian I with Mary of Burgundy, heiress of Burgundy (the Low Countries) and the marriage of his son Philip I of Castile (known as Philip the Handsome) with Joanna of Castile, heiress of Spain and its newly-founded empire, Charles V, Holy Roman Emperor inherited Spain, Southern Italy, Austria, and the Low Countries. In 1580 his son Philip II inherited Portugal and its colonies, thus ruling over an empire where "the sun does not set."

Under Maximilian II, the Habsburgs first acquired the land upon which would later be erected the Schönbrunn Palace: the Habsburgs' summer palace in Vienna and one of the most enduring symbols of the dynasty.

Division of the House: Austrian and Spanish Habsburgs 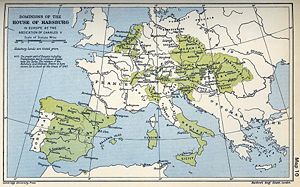 A map of the dominion of the Habsburgs following the Battle of Mühlberg (1547) as depicted in The Cambridge Modern History Atlas (1912); Habsburg-controlled lands are shaded green. Not shaded are the lands of the Holy Roman Empire over which the Habsburgs also later presided, nor are the vast Spanish holdings of the New World shown.

After the April 21, 1521 assignment of the Austrian lands to Ferdinand I, Holy Roman Emperor from his brother Emperor Charles V, Holy Roman Emperor (also King Charles I of Spain) (1516 - 1556), the dynasty split into one Austrian and one Spanish branch. The Austrian Habsburgs (after 1556) held the title of Holy Roman Emperor, as well as the Habsburg Hereditary Lands and the Kingdoms of Bohemia and Hungary, while the Spanish Habsburgs ruled over the Spanish kingdoms, the Netherlands, the Habsburgs' Italian possessions, and, for a time, Portugal. Hungary, nominally under Habsburg kingship from 1526 but mostly under Ottoman Turkish occupation for 150 years, was reconquered in 1683 - 1699.

The Spanish Habsburgs died out in 1700 (prompting the War of the Spanish Succession), as did the Austrian Habsburgs in 1740 (prompting the War of the Austrian Succession). However, the heiress of the last Austrian Habsburg (Maria Theresa) had married Francis I, Holy Roman Emperor, Duke of Lorraine, (both of them were great-grandchildren of Habsburg Emperor Ferdinand III, but from different empresses) and their descendants carried on the Habsburg tradition from Vienna under the dynastic name Habsburg-Lorraine. It is often speculated that extensive intra-family marriages within both lines contributed to their extinctions, but there were few such marriages in the Austrian line. Smallpox killing young heirs was a greater cause.

House of Habsburg-Lorraine: the Austrian Empire

On August 6, 1806 the Holy Roman Empire was dissolved under the French Emperor Napoleon Bonaparte's reorganization of Germany. However, in anticipation of the loss of his title of Holy Roman Emperor, Francis II declared himself hereditary Emperor of Austria (as Francis I, thereof) on August 11, 1804, three months after Napoleon had declared himself Emperor of France on May 18, 1804.

Emperor Francis II of Austria used the official great title: "We, Francis the First, by the grace of God Emperor of Austria; King of Jerusalem, Hungary, Bohemia, Dalmatia, Croatia, Slavonia, Galicia (Central Europe), and Lodomeria; Archduke of Austria; Duke of Lorraine, Salzburg, Würzburg, Franconia, Styria, Carinthia, and Carniola; Grand Duke of Kraków; Grand Prince of Transylvania; Margrave of Moravia; Duke of Sandomir, Masovia, Lublin, Upper and Lower Silesia, Auschwitz and Zator, Teschen, and Friuli-Venezia Giulia; Prince of Berchtesgaden and Mergentheim; Princely Count of Habsburg, Gorizia, and Gradisca and of the Tyrol; and Margrave of Upper and Lower Lusatia and Istria]."

In 1867 effective autonomy was given to Hungary under the terms of the Ausgleich or "compromise" until the Habsburgs' deposition from both Austria and Hungary in 1918 following defeat in World War I.

Before Rudolph I of Germany rose to become Holy Roman Emperor, the Habsburgs were Counts in what is today southwestern Germany and Switzerland.

In the late Middle Ages, when the Habsburgs expanded their territories in the east, they often ruled as dukes of the Duchy of Austria which covered only what is today Lower Austria and the eastern part of Upper Austria. The Habsburg possessions also included Styria, and then expanded west to include Carinthia and Carniola in 1335 and Tyrol in 1363. Their original scattered possessions in the southern Alsace, south-western Germany and Vorarlberg were collectively known as Further Austria. The Habsburg dukes gradually lost their homelands south of the Rhine and Lake Constance to the expanding Old Swiss Confederacy. Unless mentioned explicitly, the dukes of Austria also ruled over Further Austria until 1379, after that year, Further Austria was ruled by the Princely Count of Tyrol. Names in italics designate dukes who never actually ruled.

After the death of Rudolph IV, his brothers Albert III and Leopold III ruled the Habsburg possessions together from 1365 until 1379, when they split the territories in the Treaty of Neuberg, Albert keeping the Duchy of Austria and Leopold ruling over Styria, Carinthia]], Carniola, the Windish March, Tyrol, and Further Austria.

Sigismund had no children and adopted Maximilian I, Holy Roman Emperor, son of duke Frederick V (emperor Frederick III). Under Maximilian, the possessions of the Habsburgs would be united again under one ruler, after he had re-conquered the Duchy of Austria after the death of Matthias Corvinus, who resided in Vienna and styled himself duke of Austria from 1485 - 1490.

Kings of Hungary previous to the reunion of the Habsburg possessions

Maria Theresa of Austria, Habsburg heiress and wife of emperor Francis I Stephen]], reigned as Archduchess of Austria and Queen of Kingdom of Hungary and Bohemia 1740 - 1780.

Queen Maria Christina of Austria of Spain-great-granddaugther of Leopold II, Holy Roman Emperor above. Wife of Alfonso XII of Spain and mother of Alfonso XIII.

The House of Habsburg-Lorraine retained Austria and attached possessions after the dissolution of the Holy Roman Empire; see below.

Francis Stephen assigned the grand duchy of Tuscany to his second son Peter Leopold, who in turn assigned it to his second son upon his accession as Holy Roman Emperor. Tuscany remained the domain of this cadet branch of the family until Italian unification.

House of Habsburg-Lorraine: Dukes of Modena

The duchy of Modena was assigned to a minor branch of the family by the Congress of Vienna. It was lost to Italian unification.

House of Habsburg-Lorraine: Duchess of Parma

The duchy of Parma was likewise assigned to a Habsburg, but did not stay in the House long before succumbing to Italian unification.

House of Habsburg-Lorraine: Emperor of Mexico

Maximilian, an adventurous younger son, was invited as part of Napoleon III's manipulations to take the throne of Mexico and rule with his wife Carlota. The adventure did not end well. Maximilian was shot in "Cerro de las Campanas" in 1867.

Charles I was expelled from his domains after World War I and the empire was abolished. The Habsburg Law of 1918 stated that Charles' descendants could only return to Austria if they renounced their royal claims and accepted the status of private citizens. In a declaration dated 31 May 1961, Otto renounced all claims to the Austrian throne and proclaimed himself "a loyal citizen of the republic," a move that he made only after much hesitation and certainly "for purely practical reasons." In 1963 the Austrian administrative court found that Otto's statement was sufficient to meet this requirement. In June 1966, Otto was issued an Austrian passport and was finally able to visit his home country again in October 1966 for the first time in 48 years.

Habsburgs as Kings of Hungary

The kingship of Kingdom of Hungary Hungary remained in the Habsburg family for centuries; but as the kingship was not strictly inherited (Hungary was an elective monarchy till 1687) and was sometimes used as a training ground for young Habsburgs, the dates of rule do not always match those of the primary Habsburg possessions. Therefore, the kings of Hungary are listed separately.

Habsburgs as Kings of Bohemia

The kingship of Bohemia was for centuries a position elected by its nobles. As a result, it was not an automatically inherited position. The king of Bohemia tended to be a Habsburg, but was not always. Hence, the kings of Bohemia and their ruling dates are listed separately.

From the accession of Maria Theresa, the kingship of Bohemia became united with the Austrian possessions.

Habsburgs as Queens Consort of France

From the sixteenth through the eighteenth centuries, the greatest non-Habsburg power in Europe was usually France. As a result, in usually futile attempts to either unite Europe under the Habsburg family or to prevent French enmity, Habsburg daughters were wed to successive kings of France.