Hadad (Hebrew: בעל הדד; Ugaritic Haddu) was an important northwest Semitic storm and fertility god, identical with the Akkadian weather god Adad. Hadad is often called simply Ba‘al (Lord) and is frequently equated with the biblical Baal, but this title is also used for other gods. As the god of rain, thunder, and fertility, Hadad is also related to the Babylonian Marduk, the Anatolian storm-god Teshub, the Egyptian god Set, the Greek god Zeus, and the Roman god Jupiter.

In Canaanite mythology, Hadad was one of the sons (or the grandsons) of El. He rose to the head of the pantheon by slaying the sea-god Yam, much as the Babylonian Marduk became king of the gods by killing Tiamat. He was then challenged and overcome by Mot, the god of death, but was saved and resurrected through the intervention of his sister-lover Anat, bringing an end to a terrible drought.

As the controller of storms and bringer of rain, Hadad was both loved and feared by his people, and his propitiation was thought to ensure the return of life-giving water to the earth. In the Bible, he was one of many "baals" considered to be the enemies of the Hebrew deity Yahweh and was the specific "Baal" opposed by the prophet Elijah, who proved that it was the God of Israel rather than Baal-Hadad who could bring an end to the drought that had plagued the land.

Relief of Baal-Hadad with lightning bolt found at Ugarit

In the mythological tablets found in Ugarit, especially the Baal cycle, the god hd (theoretically vocalized as Haddu) occurs often, usually normalized as Hadad in translations and scholarly writings. In these texts, Hadad is usually called by the title b‘l (theoretically vocalized as Ba‘l), meaning "Lord." Other titles give him include ‘lyn (‘Aliyan), meaning "Most High," and "Cloud-Rider." Ba‘l is usually normalized to Ba‘al or Baal in translations and discussions.

In Canaanite religious texts, Ba‘al-Hadad is the Lord of the sky who governs the rain and thus the germination of plants. He is the protector of life and growth to the agricultural people of the region. The absence or temporary death of Ba‘al causes dry spells, starvation, death, and chaos.

Hadad is called son of the god Dagon and also the son of El. Since El is called father to all the gods, he may thus be Hadad's grandfather. Ba‘al-Hadad is himself the father of three goddesses, named Pidray ("Shining"), Tallay ("Rainy"), and Arṣay ("Earthy"), with no mother named. Their mother may be ‘Athtart, also called ‘Athtart-name-of-Ba‘l. The "Virgin" goddess ‘Anat in these texts is Ba‘al's sister, savior, and lover.

Hadad has his home on Mount Ṣapan, presumably the biblical Mount Zephon on the northern coast of Syria, called Hazi in Hittite, Mons Casius in Latin, and today known as Jebel al-Aqra‘. This mountain, 1780 meters high, stands only 15 km north of the site of Ugarit, clearly visible from the city itself. In the Ugaritic texts El, the supreme god of the pantheon, resides on Mount Lel (possibly meaning "Night") and it is there that the assembly of the gods meet.

The earliest sections the Baal Cycle describe some sort of feud between El and Hadad. El makes his "darling" son, the sea and river god Yam, king over the gods and changes. Yam, however, turns tyrant and oppresses the other gods. The compassionate "Mother of the gods" Asherah attempts to convince Yam to change his ways, but he agrees to do so only after she offers him her body. Baal-Hadad is outraged at this arrangement and determines to confront Yam. The divine craftsman Kothar-wa-Khasis provides Hadad with with two magic weapons, and Lord Hadad ultimately proves victorious after a titanic battle. ‘Athtart proclaims his victory and salutes Ba‘al-Hadad as lrkb ‘rpt, "Rider on the Clouds." 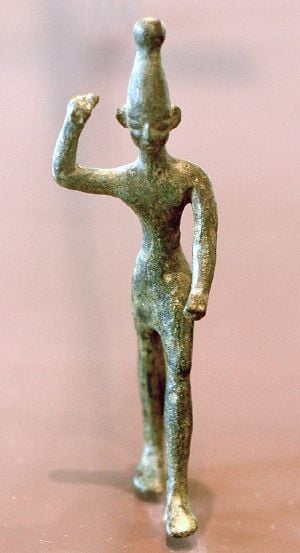 A later passage refers to Ba‘al's victory over Lotan, the many-headed sea-dragon who appears in the Hebrew Bible as Leviathan. Due to gaps in the text it is not known whether Lotan is another name for Yam or a reference to another similar story. In the Mediterranean area, ships were often lost to storms and sea, and crops were threatened by sea-driven winds, storms, and floods, indicating why the ancients feared the fury of this cosmic being.

With the sea god subdued, a palace is built for Ba‘al-Hadad with cedars from Lebanon, adorned with silver and gold. In his new palace the Lord Hadad hosts a great feast for the other gods. Hadad opens a window in his palace and sends forth thunder and lightning. He then invites Mot ("Death"—the god of drought and underworld), another son of El, to the feast.

Mot however, is insulted. An eater of human flesh and blood, he is not satisfied with bread and wine. Mot threatens to break Ba‘al-Hadad into pieces and swallow him. Even the mighty Hadad cannot stand against the god of death, and the Lord consequently dies in the withering desert. Drought plagues the land, and news of the Lord's apparent death leads even El to mourn. Anat, Hadad's sister, finds his corpse, offers sacrifices in his honor, and buries his body with a funeral feast. Another god is appointed to take Ba‘al's place, but he is a poor substitute. Anat then determines to avenge her brother's loss. She dares to approach Mot, cleaves him with a sword, burns him with fire, and throws his remains on the field for the birds to eat. But the earth is still cracked with drought until Shapash descends to the underworld and fetches back the life-giving Lord. El, who has had a prophetic dream of Baal-Hadad's resurrection, rejoices, and the earth springs back to life.

Seven years later, Mot returns and attacks Baal-Hadad in a mighty battle in which both gods are severely wounded but no clear victor emerges. The fight ceases only when Shapash convinces Mot that El now supports Lord Hadad. Thereupon Mot surrenders and recognizes Hadad as king.

The Akkadian deity Adad is often called the son of Anu ('Sky'). The corresponding Hittite god Teshub is likewise a type of son of Anu. The consort of the goddess Atargatis, Adad seems to have been brought to Mesopotamia sometime before 2000 B.C.E. by Amorite tribes. In Sumer he was known as Ishkur. The bull and the lion were sacred to him. Adad was worshiped in cities throughout Babylonia, Assyria, and Aleppo in Syria, and he was also a god of divination.

A Hittite cult image of Hadad.

Tablets written in the second millennium B.C.E., indicate that the king of Aleppo received a statue of Ishtar from the king of Mari, as a sign of deference, to be displayed in the temple of Hadad in Kilasou. On a stele of the Assyrian king Shalmaneser I, Adad is called "the god of Aleppo."

The name Hadad also appears in numerous theorphoric royal titles and throne names. In the Bible, Hadad (Gen. 25:15) was one of the 12 sons of Ishmael who became the ruler of one of the Ishmaelite tribes. Hadadezer ('Hadad-is-help') was the Aramean (Syrian) king defeated by King David (2 Sam. 8). Hadad the Edomite was an adversary of King Solomon allied with Egypt (1 Kings 11). Later Aramean kings of Damascus habitually assumed the throne name of Ben-hadad, or son of Hadad, just as a series of Egyptian monarchs are known to have called themselves sons of Ammon (Amenhotep). Ben-hadad was also the name of the king of Aram whom Asa, king of Judah, paid to invade the northern kingdom of Israel, according to 1 Kings 15:18. In the ninth or eighth century B.C.E., King Bar-Hadad's ("Son of Hadad") name is inscribed on his basalt stele dedicated to the god Melqart, found in Bredsh, a village north of Aleppo.

A related title is found in the Aramaic rmn (Old South Arabic rmn, Hebrew rmwn, Akkadian Rammānu), meaning 'Thunderer'. The Hebrew spelling rmwn is found in 2 Kings 5:18, which refers to a "temple of Rimmon." The word Hadad-rimmon, found in the phrase "the mourning of (or at) Hadad-rimmon" (Zechariah 12:2), has been a subject of much discussion. According to the Church Father Jerome and other ancient Christian interpreters, the mourning is for something that occurred at a place called Hadad-rimmon in the valley of Megiddo. The event alluded to was generally held to be either the death of King Josiah or, as in the Targum, the death of Ahab at the hands of Hadad-rimmon. However, some commentators suspect that Hadad-rimmon might be a dying-and-resurrecting god like Adonis or Tammuz, perhaps even the same as Tammuz. Hadad-rimmon could then refer to the mourning for Hadad such as those which usually accompanied the Adonis festivals. In the Baal Cycle, both El and Anat mourn Hadad's death by lacerating themselves, and in the biblical confrontation between Elijah and the prophets of Baal, the latter prophets also cut themselves as a mean of propitiating their deity to put an end to a drought.

In the Phoenician writer Sanchuniathon's account, a transition between the Canaanite and Greek traditions is often evident. Here, Hadad is called Adodos but more often named Demarûs. Sanchuniathon's Hadad is the son of Sky by a concubine who is then given to the god Dagon while she is pregnant by Sky. In Sanchuniathon's version, it is Sky who first fights against the sea god Pontus. Then Sky allies himself with Adodos-Demarûs. Adodos takes over the conflict but is defeated, at which point unfortunately no more is said of this matter. Sanchuniathion agrees with Ugaritic tradition in making Muth (Mot) whom he also calls "Death," the son of El.

Hadad and the Bible

In the Bible, Hadad does not appear as a specific deity, but "Baal" and "the baals" appear frequently as rivals to the Hebrew deity Yahweh. Since the term Baal was a title as well as a name (much as "The Lord" was both a title and an alternate name for Yahweh) it is not always easy to recognize which "Baal" is referenced in the biblical text. Deities like "Baal-Peor" apparently refer to a god worshiped at Peor, while Baal-Melqart is the Phoenician deity Melqart. In many cases, however, the biblical "Baal" seems to be identical to Hadad, the Ugaritic Baal.

Some scholars believe some hymns which originally described Hadad have been adapted to the worship of Yahweh. Psalm 29 is one example: