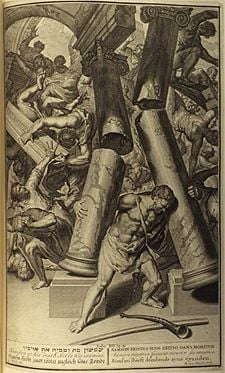 Samson destroys a temple of Dagon.

Dagon was an ancient northwest Semitic god worshiped by the early Amorites and by the people of Ebla and Ugarit. He was also a major god, perhaps the chief god, of the biblical Philistines.

Mythological sources on Dagon are far from consistent. The prevailing view today is that Dagon was a fertility deity related to grain and agriculture. In some cultures he may have been identical with Baal/Hadad. However, some authorities regard him as a type of merman figure or fish-deity of the the Sea Peoples. Most popular images of him portray Dagon in this vein.

In the biblical story of Samson, it is a temple of Dagon which the Hebrew hero pulled down in the final act of his drama. It is also likely that Dagon was among the deities invoked by the giant Philistine warrior Goliath in his taunts against Israel and David.

Dagon has become a popular figure in recent literature, movies, and the fantasy-role-playing game genre.

Dagon's name appears in Hebrew as דגון (transcribed Dagon or sometimes "Dagan"), in Ugaritic as dgn (probably vocalized as Dagnu), and in Akkadian as Dagana, Daguna.

In Ugaritic, the word dgn means "grain." Similarly, in Hebrew dāgān {Samaritan dīgan) is an archaic word for grain, related to Arabic dagn ("rain" or "rain-cloud"). The Phoenician writer Sanchuniathon translated Dagon into Greek as Siton, again meaning "grain." He further explained: "And Dagon, after he discovered grain and the plough, was called Zeus Arotrios." The word Arotrios means both "ploughman" and "pertaining to agriculture."

However, the fact that the Hebrew word dāg/dâg means "small fish" led to a tradition that Dagon was a fish-god, as this is consistent with his worship by the so-called Sea Peoples. Archaeological finds of representations of such a deity, though not overtly identified as Dagon, tended to confirm this hypothesis. (See Fish-god tradition below.)

The god Dagon first appears in archaeological records about 2500 B.C.E. in the Mari documents and in personal Amorite names in which the gods Ilu (Ēl), Dagan, and Hadad/Adad are especially common. At Ebla (Tell Mardikh), from at least 2300 B.C.E., Dagan was the head of the city pantheon, which included some 200 deities. He bore such titles as BE-DINGIR-DINGIR (Lord-God of gods) and Bekalam (Lord of the land). His consort was known only as Belatu, "The Lady." Both were worshiped in a large temple complex called E-Mul, the "House of the Star." One entire quarter of Ebla and one of its gates were named after Dagan. Dagan is also called ti-lu ma-tim ("dew of the land") and Be-ka-na-na (possibly "Lord of Canaan"). He was the patron god of several towns or cities, including Tuttul, Irim, Ma-Ne, Zarad, Uguash, Siwad, and Sipishu.

An interesting early reference to Dagan occurs in a clay tablet letter written to King Zimri-Lim of Mari, eighteenth century B.C.E., written by the governor of Nahur, biblical Nahor. (ANET, p. 623) It relates a dream in which Dagan blamed a military defeat of Zimri-Lim on his failure to bring a report of his deeds to Dagan at his temple. Dagan promises that when Zimri-Lim has done so, "I will have the kings of the Yaminites cooked on a fisherman's spit, and I will lay them before you."

In Ugarit around 1300 B.C.E., Dagon had a large temple and was listed third in the pantheon following a father-god and Ēl, and preceding Baīl Ṣapān (also called Hadad). However, in the known Ugaritic mythological texts, Dagon is mentioned solely in passing, as the father of the Hadad. According to Sanchuniathon, Dagon was the brother of El/Cronus and not Hadad's father.

Dagan is mentioned occasionally in early Sumerian texts but becomes prominent only in later Akkadian inscriptions as a powerful and warlike protector, sometimes equated with Enlil. Dagan's wife was in some sources the goddess Shala (also named as wife of Hadad and sometimes identified with Ninlil). In other texts, his wife is called Ishara. In the preface to his famous law code, King Hammurabi calls himself "the subduer of the settlements along the Euphrates with the help of Dagan, his creator." An inscription about an expedition of Naram-Sin to the Cedar Mountain relates "Naram-Sin slew Arman and Ibla with the 'weapon' of the god Dagan who aggrandizes his kingdom." (ANET, p. 268). The stele (a standing inscribed stone monument) of Ashurnasirpal II refers to Ashurnasirpal as the favorite of Anu and of Dagan. (ANET, p. 558). In an Assyrian poem, Dagan appears beside Nergal and Misharu as a judge of the dead. A late Babylonian text makes him the underworld prison warder.

The Phoenician inscription on the sarcophagus of King Eshmunʿazar of Sidon (fifth century B.C.E.) relates: "Furthermore, the Lord of Kings gave us Dor and Joppa, the mighty lands of Dagon, which are in the Plain of Sharon, in accordance with the important deeds which I did" (ANET, p. 662).

In Biblical texts and commentaries

In the Hebrew Bible, Dagon is particularly the god of the Philistines, with temples at Beth-dagon in the territory of the tribe of Asher (Joshua 19:27) and in the Philistine cities of Gaza (Judges 16:23) and Ashdod (1 Samuel 5).

According to Judges 16, the temple of Dagon in Gaza was destroyed by Samson as his final act. The account in 1 Samuel 5.2–7 relates how the ark of Yahweh was captured by the Philistines and taken to Dagon's temple in Ashdod.

There was also a place known as Beth-Dagon in the territory of the Judah (Joshua 15:41). Josephus (Antiquities 12.8.1; War 1.2.3) mentions a place named Dagon north of Jericho. Saint Jerome mentions a place called Caferdago (Kafar Dagon) between Diospolis and Jamnia. There is also a modern Beit Dejan south-east of Nablus. Some of these names, however, may have to do with simple grain production rather than the god Dagon himself.

Rabbinical tradition holds that the Philistine warrior Goliath was a devotee of Dagon. The same tradition holds that it was Goliath who captured the Ark of the Covenant as described in 1 Samuel 5, above. Goliath had the image of Dagon engraved on his chest and invoked this deity in his taunts against Israel and David prior to his death.

The medieval rabbinical sage Rashi records a tradition that the name Dāgôn is related to Hebrew dāg/dâg 'fish' and that Dagon was imagined in the shape of a fish. The grammarian and scholar Rabbi David Kimchi (thirteenth century) added: "It is said that Dagon, from his navel down, had the form of a fish (whence his name, Dagon), and from his navel up, the form of a man, as it is said, his two hands were cut off."

John Milton uses this tradition in his Paradise Lost Book 1:

... Next came one
Who mourned in earnest, when the captive ark
Maimed his brute image, head and hands lopt off,
In his own temple, on the grunsel-edge,
Where he fell flat and shamed his worshipers:
Dagon his name, sea-monster, upward man
And downward fish; yet had his temple high
Reared in Azotus, dreaded through the coast
Of Palestine, in Gath and Ascalon,
And Accaron and Gaza's frontier bounds.

Various nineteenth century scholars, including the pioneer Bible critic Julius Wellhausen, believed this tradition to have been validated from the occasional occurrence of a merman motif found in Assyrian and Phoenician art, including coins from Ashdod and Arvad.

Dagon is sometimes identified with Matsya, the fish avatar of Krishna.

In fiction and contemporary culture

Some parts of the above derive from the 1911 Encyclopædia Britannica.