Nautilus (from Greek nautilos, "sailor") is the common name of any marine creatures of the cephalopod family Nautilidae, the sole family of the suborder Nautilina. Cephalopods generally are divided into three subclasses: Ammonoidea (extinct ammonoids), Coleoidea (octopuses, squids, cuttlefishes, extinct belemites), and Nautiloidea. The nautilus is the only extant (living) representatives of the subclass Nautiloidea, a once diverse and abundant group that originated in the Cambrian period 500 million years ago (mya) and flourished during the Paleozoic and Mesozoic eras.

Nautilus differs from other extant cephalopods by having an external shell and two pair of gills rather than one (Vecchione 2006). While female argonauts do secrete a shell-like egg case, this paper-thin structure lacks the gas-filled chambers present in buoyant, chambered nautilus shells and is not a true cephalopod shell, but rather an innovation unique to the genus Argonauta (Naef 1923).

The Nautilus not only plays a role in food chains—using its strong "beak" to consume shrimp, crabs, and fish, and in turn being eaten by fish, sea mammals, octopuses, and so forth—but they also provide aesthetic value for humans. Their captivating spiral shells, which grow logarithmically, have been featured as decoration and jewelry, and the chambered nautilus is a focal point of works of art and literature, such as a poem by Oliver Wendell Holmes and a painting by Andrew Wyeth.

Nautilidae comprises six very similar species in two genera, the type genus of which is Nautilus. The term "chambered nautilus," though it more specifically refers to the species Nautilus pompilius, is also used for any species of the Nautilidae.

Nautiluses have survived relatively unchanged for millions of years and often are considered to be "living fossils" (Saunders 1987).

The nautilus is similar in general form to other cephalopods, with a prominent head and a foot modified into numerous tentacles. The tentacles of nautiluses differ from other cephalopods not only in being greater in number, but also in lacking suckers. Rather, they have adhesive ridges (Young 2006). These tentacles are arranged into two circles and are undifferentiated and retractable.

The radula (toothed ribbon used for grazing and scraping) is wide and distinctively has nine teeth.

Like other cephalopods, nautilus has a closed circulatory system. Like most mollusks, they use hemocyanin, a copper-containing protein, rather than hemoglobin to transport oxygen. There are two pairs of gills, whereas other extant cephalopods has one pair.

The majority of nautiluses never exceed 20cm in diameter, but Nautilus pompilius, the largest species in the genus, has a form from western Australia that may reach 26.8cm. Nautilus macromphalus is the smallest species, usually measuring only 16cm. 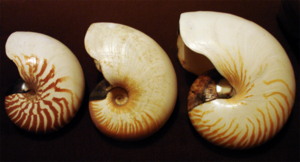 Nautiluses are the sole cephalopods whose bony structure of the body is externalized as a shell. The animal can withdraw completely into its shell, closing the opening with a leathery hood formed from two specially folded tentacles. The shell is coiled, calcareous, mother-of-pearl-lined, and pressure resistant (imploding at a depth of about 800m).

The nautilus shell is composed of two layers: the outer layer is a matte white, while the inner layer is a striking, iridescent white. The innermost portion of the shell is pearlescent, blue-gray. The osmena pearl, contrarily to its name, is not a pearl, but a jewelry product derived from this part of the shell.

The shell is internally divided into chambers, the chambered section being called the phragmocone. The phragmocone is divided into camerae by thin walls called septa (sing. septum), all of which are pierced in the middle by a duct, the siphuncle. As the nautilus matures, its body moves forward, sealing the camerae behind it with a new septum. The last fully open chamber, also the largest one, is used as the living chamber. The number of camerae increases from around four at the moment of hatching to thirty or more in adults.

The siphuncle is a thin living tube that passes through the septa, extending from the nautilus's body into the empty shell chambers. Through a hyperosmotic active transport process, the nautilus can empty water out of these shell chambers. This enables it to control the buoyancy of the shell and thereby rise or descend in the water column.

The shell coloration also keeps the animal cryptic (able to avoid observation) in the water. When seen from the top, the shell is darker in color and marked with irregular stripes, which makes it blend into the darkness of the water below. On the contrary, the underside is almost completely white, making the animal indistinguishable from brighter waters near the ocean surface. This mode of camouflage is named countershading.

The nautilus shell presents one of the finest natural examples of a logarithmic spiral. (It is sometimes incorrectly claimed to be a golden spiral—that is, related to the golden ratio—as well.)

In order to swim, the nautilus draws water into and out of the living chamber with the hyponome, which makes use of jet propulsion. It is, however, a slow swimmer.

In addition to offering protection, the shell acts as a buoyancy device. When water is inside the chamber, the siphuncle extracts salt from it and diffuses it into the blood. When water is pumped out, the animal adjusts its buoyancy with the gas contained in the chamber. Buoyancy can be controlled by the osmotical pumping of gas and fluid into or from the camerae along the siphuncles. The control of buoyancy in this manner limits the nautilus; they cannot operate under extreme hydrostatic pressures. The limit appears to be about 300 meters, exceeding this depth for only short periods of time (Young 2006, Saunders and Ward 1987).

The animal can also crawl on land or on the seabed.

In the wild, some nautiluses usually inhabit depths of about 300 meters, rising to around 100 meters at night for feeding, mating, and egg laying. The shell of the nautilus cannot withstand depths greater than approximately 800 meters. Nautiluses are predators and feed mainly on shrimp, small fish, and crustaceans, which are captured by the tentacles. However, due to the very little energy they devote to swimming, they only need to eat once a month.

Unlike other cephalopods, they do not have good vision; their eye structure is highly developed, but lacks a solid lens. They have a simple "pinhole" lens through which water can pass. Instead of vision, the animal is thought to use olfaction as the primary sensory means during foraging, locating, or identifying potential mates.

Nautiluses are male or female and are sexually dimorphic, with variation in the shape and size of the shell according to the gender of the animal—the shell of the male being slightly smaller and wider than that of the female.

Nautiluses reproduce by laying eggs. Attached to rocks in shallow waters, the eggs take twelve months to develop before hatching out at around 30 mm long. Females spawn once per year and regenerate their gonads, making nautiluses the only cephalopods to present polycyclic spawning or iteroparity (producing a few large eggs in each batch and living for a long time). Other cephalopods tend towards a semelparous reproduction strategy: they lay many small eggs in one batch and die afterward.

The lifespan of nautiluses is about 20 years, which is exceptionally long for a cephalopod. With a few exceptions, Coleoidea (octopus, squid, cuttlefish) live short lives with rapid growth and high metabolism and life expectancy may be a few months to one or two years.

Nautiloids (subclass Nautiloidea) developed in the Cambrian period, about 500 million years ago, and became a significant sea predator in the Ordovician period. Certain species reached over 2.5 meters in size.

The nautilus was particularly dominant during the Ordovician and Silurian periods (about 505 to 408 million years ago), as giant, straight-shelled nautiluses, with their buoyant shells, were the only large animals that could actively swim. Sharks were still small and bony fish had not yet become neutrally buoyant (Monks 2006). They were the "great white sharks of their day" (Monks 2006).

Fossil records indicate that nautiluses have not evolved much during the last 500 million years, and nautiloids were much more extensive and varied 200 million years ago. Many were initially straight-shelled, like the extinct genus Lituites. The Nautilidae, the family to which living nautiluses belong, does not go back further than the Late Triassic (circa 215 mya) (Monks 2006).

The ancient (cohort Belemnoidea) and modern (cohort Neocoleoidea) coleoids, as well as the ammonoids, all seemed to have diverged from the external shelled nautiloid during the middle Paleozoic era, between 450 and 300 million years ago.

Extinct relatives of the nautilus include ammonites (ammonoids), such as the baculites and goniatites.

The nautilus is the most primitive cephalopod group (Monks 2006).

The Chambered Nautilus in literature and art

"The Chambered Nautilus" is the title and subject of a poem by Oliver Wendell Holmes, in which he admires the "ship of pearl" and the "silent toil/That spread his lustrous coil/Still, as the spiral grew/He left the past year's dwelling for the new."

A painting by Andrew Wyeth, entitled "Chambered Nautilus," shows a woman in a canopied bed; the composition and proportions of the bed and the window behind it mirror those of a chambered nautilus lying on a nearby table.

Overview of placement within Cephalopoda

Two subspecies of N. pompilius have been described, Nautilus pompilius pompilius and Nautilus pompilius suluensis. N. p. pompilius is by far the most common and widespread of all nautiluses. It is sometimes called the "Emperor Nautilus" due to its large size. The distribution of N. p. pompilius covers the Andaman Sea, east to Fiji and southern Japan, and south to the Great Barrier Reef. Exceptionally large specimens with a shell diameter of up to 268 mm[1] have been recorded from Indonesia and northern Australia. N. p. suluensis is a much smaller animal, restricted to the Sulu Sea, in the southwestern Philippines, after which it is named. The largest recorded specimen measured 148 mm in shell diameter (Pisor 2005).