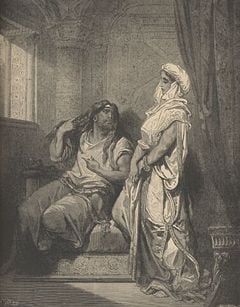 Samson and Delilah by Gustave Doré

Samson (Hebrew: שִׁמְשׁוֹן, Šimšon), meaning "of the sun," is the third to last of the judges of ancient Israel mentioned in the Hebrew Bible.

He is described in the Book of Judges 13 to 16. Samson is a Herculean figure, utilizing massive strength to combat his enemies and perform heroic feats unachievable by ordinary men: killing a lion with his bare hands, slaying an entire army with nothing more than a donkey's jawbone, and tearing down a large pagan temple with his superhuman strength. Samson had two vulnerabilities, however: his attraction to untrustworthy women and his hair, without which he was powerless. These vulnerabilities ultimately proved fatal for him.

Samson is the last of judges mentioned in the Book of Judges, and his story is by far the longest of them. The story begins with a "man of God" appearing to Samson's mother. The narrator states that he is an angel, but Samson's parents do not know this at first. Following the pattern of several other biblical women—Sarah, Rebekah and Hannah in the Hebrew Bible and Elizabeth in the New Testament—the unnamed woman is unable to bear children. The angel predicts that, even though she is sterile, she will have a son "who will begin the deliverance of Israel from the hands of the Philistines" (Judg. 13:7). In accordance with Naziritic requirements, she is to abstain from all alcoholic beverages and unclean (non-kosher) meat, and her promised child is never to shave or cut his hair. In due time, her son, Samson, is born; and he is reared according to these provisions. 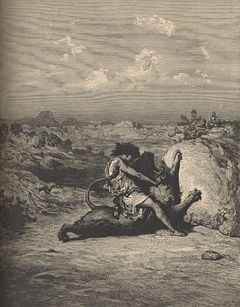 Samson slays a lion on the road to Timnah

When he becomes a young man, Samson visits the town of Timnah, where he becomes infatuated with a Philistine woman. His parents object to the match, but reluctantly agree to accompany him to Timnah to arrange it. On the way to visit his future bride, Samson is attacked by a lion and kills it with his bare hands. This is the first of his many amazing feats of strength. When he returns later to marry her, Samson notices that bees have nested in the carcass of the lion and have made honey. He eats a handful of the honey and later gives some to his parents.

At the wedding feast, Samson proposes that he tell a riddle to his thirty groomsmen (all Philistines). If they can solve it, he will give them each a costly set of clothing and undergarments. On the other hand, if they cannot solve it, Samson will receive a like set of clothing from each of them. The riddle—"Out of the eater, something to eat; out of the strong, something sweet"—is a veiled account of his second encounter with the lion.

The Philistines are stumped by the riddle. They threaten Samson's new wife, saying they will burn her and her father's household if she does not discover and share the secret of the riddle. At the urgent and tearful imploring of his bride, Samson tells her the solution; and she promptly tells it to the thirty groomsmen. When they solve his riddle, Samson accuses them of "plowing with my heifer." Filled with the spirit of Yahweh, he goes to the city of Ashkelon, kills thirty Philistines there, and presents their clothing to his his groomsmen back in Timnah. He then returns to his father's house.

When Samson visits Timnah again at harvest time, he finds that his father-in-law has given his wife to another, apparently one of Samson's Philistine companions. Her father refuses to allow him to see her, and wishes to give Samson his younger daughter instead. Samson retaliates by attaching torches to the tails of three hundred foxes, leaving the panicked beasts to run through the Philistine fields and vineyards. The precious crops are destroyed as a result. The Philistines take revenge by burning Samson's wife and father-in-law to death. Not to be outdone, Samson slaughters many more Philistines, smiting them "hip and thigh."

Samson then takes refuge in a cave in the rock of Etam, near Bethlehem. A force of three thousand men from the Tribe of Judah (a vassal of the Philistines), agree to a Philistine demand to deliver Samson to them. Samson allows them to tie him with two new ropes. They are about to hand him over to the Philistines when the spirit of Yahweh comes upon him again, and he breaks free. Using the jawbone of a donkey, he slays one thousand Philistines.

Later, Samson goes to the Philistine town of Gaza where he spends the night with a prostitute. His enemies wait at the gate of the city to ambush him, but he rips the gate up and carries it away to safety.

Continuing the theme of his fatal attraction to the wrong type of women, Samson then falls in love with the beautiful Delilah. Hearing of this, the Philistines approach Delilah and bribe her to find the secret of Samson's strength. Three times he falsely informs her to bind him in various ways; three times she does so; and three times he escapes her trap. Eventually Samson tells Delilah the that he will lose his strength if his hair is cut. Delilah calls for a servant to shave Samson's seven locks while he sleeps. The story implies that Samson probably thinks this, too, will not work. But since he has allowed his mother's oath to be broken, Yahweh now leaves him. Samson is promptly captured by the Philistines, who successfully bind him and gouge out his eyes. They then bring him to Gaza, where he is imprisoned and put to work grinding grain.

Later, the Philistine leaders assemble in the temple Dagon for a religious sacrifice celebrating their capture of Samson. They summon Samson so that he may entertain them. Three thousand additional people gather on the roof to watch. However, Samson's hair has now grown back, and his strength has returned.

Then Samson prayed to the Lord, "O Lord God, remember me, I pray thee, and strengthen me, I pray thee, only this once, O God, that I may be at once avenged of the Philistines for my two eyes..." Down came the temple on the rulers and all the people in it. (Judg. 16:28–30).

After his death, Samson's family recovers his body from the rubble and buries him near the tomb of his father. He is reported to have judged Israel for 20 years. 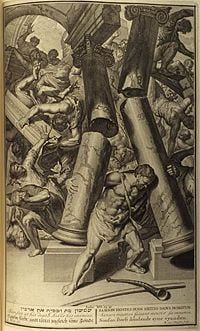 While Samson's story is undoubtedly one of the most famous and entertaining in the Bible, he can hardly be called a successful judge. None of his victories is lasting, and they all seem to be based on personal revenge rather than any patriotic motivation. Even his final act cannot be called redemptive in this sense. He uses his strength not for God or his people, but to avenge himself against the Philistines for blinding him. He does not unite the Israelites, or even his own tribe of Dan, against their oppressors. Time and again, he is deceived by beautiful women. While his acts of revenge are heroic, they do not seem particularly noble.

The Jewish Encyclopedia concludes its article on Samson with the following:

Ch. xvi. records the disgraceful and disastrous end of Samson... The final and fatal episode, in which Delilah betrays him to his enemies, is similar in its beginnings to the art practiced by the Timnitess. Samson's revenge at the feast of Dagon was the end of a life that was full of tragic events. Despite his heroic deeds he does not seem to have rid his people of the oppression of the Philistines; his single-handed combats were successful, but they did not extricate Israel from Philistine tyranny.[1]

The rabbis give varied and sometimes conflicting additional information about Samson. In the Talmudic period, as today, many Jews seem to have been skeptical about whether Samson was an historical figure. He was regarded by some as a purely mythological character. This opinion was considered heretical by some of the rabbis of the Talmud.

One tradition identifies Samson with Bedan, a judge mentioned by Samuel in his farewell address (1 Sam. 12:11). The name "Samson" is based on the word shemesh ("sun"). Thus another rabbinical opinion compares his strength to the power of the sun, which, like Samson's, was derived from God. (Talmud, Tractate Sotah 10a).

One legend records that Samson was lame in both feet (Sotah 10a), but when the spirit of God came upon him he could cover several kilometers with one stride. His hair itself was magical, in that his individual strands clashed so violently against one another that the sound could be heard for miles (Midrash Lev. Rabbah 8:2). Samson was so strong that he could lift two mountains and rub them together like two clods of earth (Sotah 9b). Yet, his superhuman strength, like Goliath's, brought him no happiness (Midrash Eccl. Rabbah 1).

In licentiousness he is compared with King David's son Amnon and the evil Israelite King Zimri, both of whom were punished for their sins (Midrash Lev. Rabbah. 23:9). Samson's eyes were put out because he "followed them" too often (Sotah l.c).

Samson has been a popular subject for paintings. Among them: