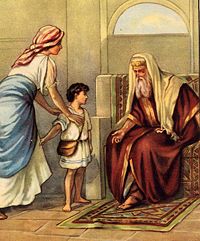 Eli receives Samuel from Hannah, who has offered him to God's service at Shiloh.

Eli (Hebrew: עֵלִי, "Ascent") was the high priest at Shiloh and one of the last Israelite judges before the beginning of the rule of kings in ancient Israel in the eleventh century B.C.E. He is chiefly known as the spiritual teacher and adopted father of Samuel, the last and greatest of the judges.

On another level, Eli's is a tragic story of a man who appears to be personally righteous but fails to control the sins of his sons, Hophni and Phinehas, and as a result loses the blessing God originally intended for him and his lineage. At the end of his long reign of 40 years, the Philistines defeated the Israelites in the battle of Aphek, capturing the Ark of the Covenant, and slaying Eli's sons. Upon hearing the news, Eli himself died, after falling over backward and breaking his neck. The once important shrine of Shiloh soon diminished in prestige and never again housed the sacred Ark.

In Samaritan tradition, Eli is seen as a villainous apostate priest who originated the division between the Jews and Samaritans by leaving Mount Gerizim and establishing a rival shrine at Shiloh. (Jewish tradition, on the other hand, holds that the Tabernacle had been established at Shiloh from the time of Joshua.)

In the Bible, his descendant Abiathar was high priest under King David. Although his personal life ended tragically, he left an important legacy by training Samuel, who is portrayed by the biblical writers as a key figure in establishing Israel as a nation.

Eli was a descendant of Aaron's fourth son, Ithamar, and lived at the end of the period of judges, his base being the Tabernacle at Shiloh. Eli first appears in the biblical narrative at the beginning of the first Book of Samuel. (His abrupt appearance leads some biblical scholars to suggest that the biblical writers for some reason did not choose to include that portion of the account of Eli's life that deals with his ministry prior to Samuel's arrival on the scene.) Here, it tells of a man name Elkanah, whose wife Hannah is barren. Year after year Elkanah travels to Shiloh to offer sacrifice to God. Eli is apparently retired from his priestly office by this time, for his sons, the corrupt Hophni and Phinehas, are active priests at Shiloh's Tabernacle.

Hannah prays fervently to God for a child. Eli, who is sitting at the foot of the doorpost in the sanctuary, hears her prayer, and thinks Hannah is drunk. After he is assured by her of her true motivation and sobriety, he blesses her prayer for a child. "May the God of Israel grant you what you have asked of him," Eli tells her (1 Samuel 1:17). 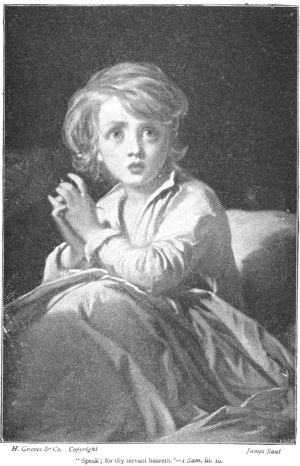 The boy Samuel hears God's voice thinking it is Eli.

Subsequently, Hannah has sex with her husband, and she becomes pregnant, giving birth to Samuel. She determines to offer the child to God's service, and when the child is weaned, she leaves him in the care of Eli. (Though the text states that the child was Samuel, some textual scholars believe that it originally referred to Saul, since the explanation given for Samuel's name is awkward, but a far better fit for Saul's.)

The sons of Eli, Hophni and Phinehas, meanwhile, were behaving wickedly. They took for themselves the prime cuts of meat from the sacrifices to God offered through them, but worse, they were having sex with the women who served at the sanctuary entrance. Despite Eli's castigation of their behavior, the sons continued in their sin. Meanwhile Samuel was developing nicely: He "continued to grow in stature and in favor with the Lord and with men" (1 Sam. 2:25).

At this point, an unidentified "man of God" confronts Eli and informs him that he and his family will be punished for the sins of Hopnhi and Phinehas, with most of the men dying by the sword in youth, and only a few surviving to serve as priests. In addition, although Eli had previously been promised by God that his family would be priests of Yahweh forever, the man of God states that this will no longer be the case. More specifically, Eli is told by the prophet that his sons will both die on the same day.

Samuel now emerges as a prophet in his own right, and Eli trains him. When Samuel hears Yahweh speaking to him at night, he at first thinks it is Eli, but Eli, who doesn't himself hear the voice, eventually realizes the truth and instructs Samuel on how to respond. "Say 'Speak, Lord, for your servant is listening,'" Eli instructs him (1 Sam 3:9). God finally speaks more fully to Samuel, reiterating the doom which the unnamed prophet had earlier pronounced:

See, I am about to do something in Israel that will make the ears of everyone who hears of it tingle…. For I told [Eli] that I would judge his family forever because of the sin he knew about. His sons made themselves contemptible, and he failed to restrain them. Therefore, I swore to the house of Eli, "The guilt of Eli's house will never be atoned for by sacrifice or offering" (1 Sam. 3:11-14)

Eli asks Samuel what he God has said, insisting that he be told the whole truth, and so Samuel repeats God's words. Eli resignedly responds by saying that Yahweh will do what he judges best.

The text then skips to some years later, when Samuel has grown up. Eli is now extremely old, and the Philistines attack the Israelites at Aphek, killing 4,000. The Israelites decide to bring forth the Ark of the Covenant from Shiloh as their standard. Hophni and Phinehas carry the Ark into battle, while Eli, who is now blind and by some accounts 98 years old, remains at the sanctuary. The Ark indeed provides the Israelites with hope, but the Philistines rally and defeat them. According to the account, the results were catastrophic: "The slaughter was very great; Israel lost thirty thousand foot soldiers. The ark of God was captured, and Eli's two sons, Hophni and Phinehas, died" (1 Sam. 4:10-11).

After the slaughter, a messenger runs back to Shiloh to report on events. When Eli is told what had happened, he falls over backward and dies from a broken neck. To further compound the tragedy, Eli's daughter-in-law goes into premature labor on hearing the news, dying as a result, but giving birth to a son whom she names Ichabod. Samuel, however, goes on to become Israel's greatest judge, uniting the tribes to a degree not achieved by his predecessors, achieving important military victories, serving as both priest and prophet, and famously anointing both of Israel's first two kings, Saul and David.

Eli plays a particularly important role in Samaritan tradition, where he is seen as an inattentive priest who was removed from his office by the high priest Uzzi, and then abandoned Mount Gerizim to establish a rival shrine at Shiloh. Eli allegedly prevented southern pilgrims from Judah and Benjamin from attending the Gerizim shrine. He also fashioned a duplicate of the Ark of the Covenant, and it was this replica that eventually made its way to the Judahite Temple of Jerusalem. Eli's protégé, Samuel, later anointed David, a Judahite, as the first king of the supposedly united kingdom of Judah/Israel. However, Samaritan tradition recognizes neither the kings of Judah nor those of the northern kingdom of Israel as legitimate.

The Samaritans assert that Mount Gerizim was the original site intended by God as the location of his central Temple. In the Bible, Mount Gerizim is first mentioned when Moses ordered Joshua to take the Twelve Tribes of Israel to the mountains overlooking the town of Shechem and place half of the tribes on the top of Mount Gerizim, and the other half in Mount Ebal (Deuteronomy 11:29). From Gerezim, the tribes would pronounce the blessings given by God for those who follow the Law, and from Ebal they would pronounce the curses given to those who disobey.

Eli was 50 years old, endowed with wealth and in charge of the treasury of the children of Israel… He offered a sacrifice on the altar, but without salt, as if he were inattentive. When the Great High Priest Uzzi learned of this, and found the sacrifice was not accepted, he thoroughly disowned him… Thereupon, Eli and the group that sympathized with him rose in revolt, and at once he and his followers and his beasts set off for Shiloh… At this time the children of Israel split into three factions. A loyal faction on Mount Gerizim; a heretical faction that followed false gods; and the faction that followed Eli son of Yafni on Shiloh.[1]

Although his own sons proved wicked, Eli nonetheless left an important legacy through his training of Samuel, who was, in effect, his adopted son and spiritual heir. Samuel went on to become Israel's greatest judge, who united the tribes into a national federation, led important battles against Israel's enemies, and anointed its first two kings, Saul and David.

Though Eli's genealogy is not specified in the text, other passages indicate that he did have important descendants, particularly Abiathar, his great-grandson through Ichabod.

Abiathar would go on to be a loyal and important supporter of David through most of his life. He provided the renegade David with crucial advice by means of the sacred ephod and later, when David ascended the throne, Abiathar was appointed high priest (1 Chr. 15:11; 1 Kings 2:26) along with Zadok. He also greatly helped the king at the time of the rebellion of Absalom (2 Sam. 25:24-35). However, late in David's reign, Abiathar became a supporter of the usurper Adonijah, for which he was deposed by Solomon and banished to Anathoth. With his demise, the lineage of Zadok emerged as the leading priestly clan.