A drought is an extended period of months or years when a region notes a deficiency in its water supply. Generally, this occurs when a region receives consistently below average precipitation. It can have a substantial impact on the ecosystem and agriculture of the affected region. Although droughts can persist for several years, even a short, intense drought can cause significant damage[1] and harm the local economy.[2]

Drought is a normal, recurring feature of the climate in most parts of the world. Having adequate drought mitigation strategies in place can greatly reduce the impact. Recurring or long-term drought can bring about desertification. Recurring droughts in the Horn of Africa have created grave ecological catastrophes, prompting massive food shortages, still recurring. To the north-west of the Horn, the Darfur conflict in neighboring Sudan, also affecting Chad, was fueled by decades of drought; combination of drought, desertification and overpopulation are among the causes of the Darfur conflict, because the Arab Baggara nomads searching for water have to take their livestock further south, to land mainly occupied by non-Arab farming peoples.[3]

According to a UN climate report, the Himalayan glaciers that are the sources of Asia's biggest rivers—Ganges, Indus, Brahmaputra, Yangtze, Mekong, Salween and Yellow—could disappear by 2035 as temperatures rise.[4] Approximately 2.4 billion people live in the drainage basin of the Himalayan rivers.[5] India, China, Pakistan, Bangladesh, Nepal and Myanmar could experience floods followed by droughts in coming decades. Drought in India affecting the Ganges is of particular concern, as it provides drinking water and agricultural irrigation for more than 500 million people.[6] Paradoxically, some proposed short-term solutions to global warming also carry with them increased chances of drought.[7]

In 2005, parts of the Amazon basin experienced the worst drought in 100 years.[8] A July 2006 article reported Woods Hole Research Center results showing that the forest in its present form could survive only three years of drought. Scientists at the Brazilian National Institute of Amazonian Research argue in the article that this drought response, coupled with the effects of deforestation on regional climate, are pushing the rainforest towards a "tipping point" where it would irreversibly start to die. It concludes that the rainforest is on the brink of being turned into savanna or desert, with catastrophic consequences for the world's climate. According to the WWF, the combination of climate change and deforestation increases the drying effect of dead trees that fuels forests fires.[9]

Generally, rainfall is related to the amount of water vapor in the atmosphere, combined with the upward forcing of the air mass containing that water vapor. If either of these is reduced, the result is drought. 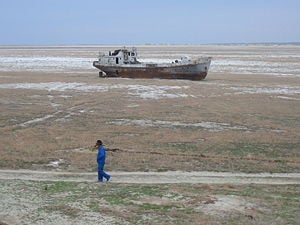 Ship stranded by the retreat of the Aral Sea.

As a drought persists, the conditions surrounding it gradually worsen and its impact on the local population gradually increases. Droughts go through three stages before their ultimate cessation:[10]

Periods of drought can have significant environmental, economic and social consequences. The most common consequences include:

The effect varies according to vulnerability. For example, subsistence farmers are more likely to migrate during drought because they do not have alternative food sources. Areas with populations that depend on subsistence farming as a major food source are more vulnerable to drought-triggered famine. Drought is rarely if ever the sole cause of famine; socio-political factors such as extreme widespread poverty play a major role. Drought can also reduce water quality, because lower water flows reduce dilution of pollutants and increase contamination of remaining water sources.

Retrieved from https://www.newworldencyclopedia.org/p/index.php?title=Drought&oldid=1095905
Categories:
Hidden category:
This page was last edited on 15 January 2023, at 09:42.
Content is available under Creative Commons Attribution/Share-Alike License; additional terms may apply. See Terms of Use for details.