An aquifer is an underground layer of water-bearing permeable rock or unconsolidated materials (such as gravel, sand, silt, or clay) from which groundwater can be usefully extracted using a water well. Most land areas on Earth have some form of aquifer underlying them, sometimes at significant depths. The study of water flow in aquifers and the characterization of aquifers is called hydrogeology.

Aquifers play an important role in the storage of water beneath the Earth's surface and in the water cycle. In addition, they provide us with freshwater for domestic, industrial, and agricultural needs. Yet, over-exploitation of aquifer systems can lead to serious problems, such as the drawing in of saltwater or polluted water from nearby sources and, occasionally, subsidence of the land surface. Recently, the life of many freshwater aquifers has been extended by newly developed methods such as the injection of surface waters during seasonal wet periods.

Description of an aquifer system 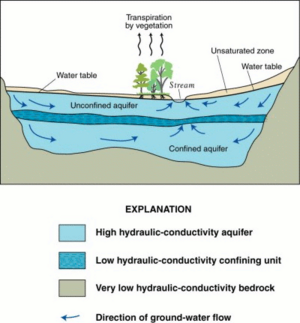 Cross-sectional view of an aquifer system

The diagram on the right shows a cross-sectional view of a simple aquifer system consisting of a confined aquifer below an unconfined aquifer. The two aquifers are separated from each other by a zone called an aquitard, which is a layer of low porosity that restricts the flow of groundwater. The aquitard is said to have "low hydraulic conductivity." The entire aquifer system is surrounded by bedrock known as aquiclude, which has extremely low hydraulic conductivity—that is, it is almost completely impermeable. The arrows in the diagram indicate the direction of flow of groundwater. The water in the aquifer system feeds a stream.

Some aquifers, called riparian aquifers, are related to rivers, fluvial deposits, or unconsolidated deposits along river corridors. They are usually rapidly replenished by infiltration of surface water. It should be noted that not all aquifers contain freshwater.

Groundwater can be found in nearly every part of the Earth's shallow subsurface, to some extent. From this perspective, the Earth's crust can be divided into two regions: the saturated zone (including aquifers and aquitards), where all available spaces are filled with water; and the unsaturated zone (vadose zone), which contains pockets of air that can be replaced by water.

Aquifers are typically saturated regions of the subsurface that produce economically feasible quantities of water to a well or spring. Sand, gravel, and fractured bedrock make good aquifer materials. An aquitard is a zone that restricts the flow of groundwater from one aquifer to another. Aquitards are made up of layers of clay or nonporous rock.

The meaning of the term "economically feasible" can vary, depending on the situation. For example, an aquifer that is adequate for domestic use in a rural area may be considered inadequate for industrial, mining, or urban needs.

"Confined" and "unconfined" aquifers are names for two end members in the spectrum of different types of aquifers. "Semi-confined" is the description given to aquifers between them. Typically (but not always), the shallowest aquifer at a given location is unconfined, which means it does not have a confining layer (aquitard or aquiclude) between it and the surface. Unconfined aquifers usually receive recharge water directly from the surface, from precipitation or surface water such as a river, stream, or lake that is in hydraulic connection with it. Confined aquifers, typically found below unconfined aquifers, have the water table above their upper boundary (an aquitard or aquiclude). A "perched aquifer" occurs when the porous, water-bearing segment of rock is located on top of a layer of nonporous rock.

Misconception about aquifers and groundwater

A common misconception is that groundwater exists in rivers that flow freely underground, such as through caves. This is only sometimes true in eroded limestone areas (known as karst topography), which make up only a small percentage of the Earth's subsurface. More often, the pore spaces of rocks in the subsurface are simply saturated with water, like a kitchen sponge. This water can be pumped out and used for agricultural, industrial, or municipal uses.

The beach is an example of what most aquifers are like. If you dig a hole into sand at the beach, you will find that the sand is very wet (saturated with water) at a shallow depth. This hole is a crude well, the beach sand is an aquifer, and the level to which the water rises in the hole represents the water table.

Aquifers are critically important in human habitation and agriculture. Those that provide sustainable fresh groundwater to urban areas and for agricultural irrigation are usually close to the ground surface (within a couple of hundred meters) and have some recharge by fresh water. This recharge is typically from rivers or meteoric water (precipitation) that percolates into the aquifer through overlying unsaturated materials. In arid areas, people often dig wells to obtain water from deep aquifers.

Some problems from aquifer exploitation

Freshwater aquifers can be over-exploited and, depending on the local conditions, may draw in non-potable water or saltwater (saltwater intrusion) from hydraulically connected aquifers or surface water bodies. This can be a serious problem, especially in coastal regions and other areas where aquifer pumping is excessive.

Some municipal well fields are specifically designed to take advantage of induced infiltration of surface water, usually from rivers. This practice leaves the surface water body potentially vulnerable to water quality problems, including pollution from chemical spills and harmful bacteria.

The depletion of groundwater from an aquifer occasionally leads to subsidence of the ground surface. Unfortunately, much of the subsidence due to groundwater extraction is permanent, and the compressed aquifer has a permanently reduced capacity to hold water.

One of the largest aquifers in the world is the Guarani Aquifer, which stretches from central Brazil to northern Argentina, covering an area of 1.2 million square kilometers. Another of the world's giant aquifers is the Great Artesian Basin, which plays a large part in supplying water to remote parts of southern Australia.

The Edwards Aquifer in central Texas is an example of a significant and sustainable aquifer.[1] It has been historically providing high-quality water for nearly two million people and remains completely full due to tremendous recharge from a number of area streams, rivers, and lakes. The primary risk to this resource is human development over the recharge areas.

Aquifer depletion is a critical problem in some areas, such as in northern Africa. The Great Manmade River project of Libya is an example. On the other hand, the life of many freshwater aquifers, especially in the United States, has been extended by new methods of groundwater management, such as artificial recharge and injection of surface waters during seasonal wet periods.

The Ogallala Aquifer of the central United States is one of the world's great aquifers, but it is being rapidly depleted in some areas by municipal and agricultural uses. This aquifer, which underlies portions of eight states, contains primarily fossil water from the time of the last glaciation. In the more arid portions of the aquifer, annual recharge is estimated to total only about 10 percent of annual withdrawals.

The Mahomet Aquifer supplies water to some 800,000 people in central Illinois and contains approximately four trillion U.S. gallons (15 cubic kilometers) of water. In 1998, the Mahomet Aquifer Consortium was formed to study the aquifer, with the hope of ensuring the water supply and reducing potential user conflicts.[2]