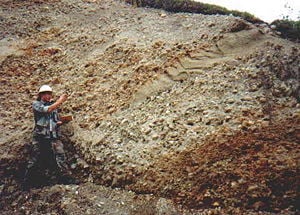 Section of alluvium at the Blue Ribbon Mine in Alaska.

Alluvium (from the Latin alluvius, from alluere, meaning "to wash against") is soil or sediment deposited by a river or other running water. Alluvium is typically made up of a variety of materials, including fine particles of silt and clay, and larger particles of sand and gravel. The deposits often contain valuable ores known as placer deposits. Flowing water associated with glaciers may also deposit alluvium, but deposits directly from ice are called glacial till, not alluvium. 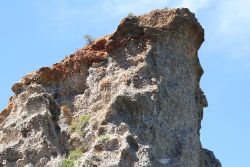 Alluvium deposits in the Gamtoos Valley in South Africa.

How deposits are made

Before alluvium can be deposited, the river or stream needs to run through areas that supply adequate material for the sediments. Areas that have a tropical climate or a high rate of tectonic uplift generate large amounts of sediment. By contrast, areas that are tectonically stable, cold, and dry usually have lower rates of sediment production.[1]

The amount of matter carried by a large river is enormous. The names of many rivers derive from the color that the transported matter gives the water. For example, the Huang He in China is literally translated "Yellow River," and the Mississippi River in the United States is also called Big Muddy. It has been estimated that the Mississippi River annually carries 406 million tons of sediment to the sea,[2] the Huang He carries 796 million tons, and the Po River in Italy carries 67 million tons.[3]

Alluvium often contains valuable ores such as gold and platinum and a wide variety of gemstones. Such concentrations of valuable ores are known as placer deposits.

Throughout history, many shallow lakes have been filled in with alluvium to leave fertile plains (alluvial soils are often very fertile). The alluvial mud annually deposited by the Nile has enabled the Egyptians to grow crops since at least the fourth millennium B.C.E. without artificial fertilization.

Since the construction of the Aswan Dam on the Nile in Egypt, 95 percent of the alluvium deposits at the mouth of the Nubia-Nasser Lake are gone, thus depriving the Nile delta of its fertility. Since 1964, 3.8 billion cubic meters of sediments have deposited in this man-made lake. Proposals have been made to dredge this alluvium and pump it in slurry pipelines to shore where it can be used to fertilize the desert.[4]

Retrieved from https://www.newworldencyclopedia.org/p/index.php?title=Alluvium&oldid=1052770
Categories:
Hidden category:
This page was last edited on 17 May 2021, at 13:45.
Content is available under Creative Commons Attribution/Share-Alike License; additional terms may apply. See Terms of Use for details.