Platinum (chemical symbol Pt, atomic number 78) is a silvery gray precious metal that is highly resistant to corrosion and an extremely good catalyst for certain chemical reactions. Once discarded as an undesirable substance mixed with gold, it is now prized for its rarity and stability, and its monetary value is rated well above that of gold. It is used in jewelry, laboratory equipment, electrical contacts, dentistry, and automobile emissions control devices. Platinum compounds are rare in nature, but some artificially synthesized ones are used as anti-cancer drugs.

Naturally occurring platinum appears to have been used by the craftsmen of ancient Egypt. Native inhabitants of parts of South America also used it for jewelry long before the arrival of Europeans. The first European account of platinum can be found in the writings of the Italian humanist Julius Caesar Scaliger (1484-1558). In 1557, Scaliger described it as a mysterious metal occurring in Central American mines between Darién (Panama) and Mexico, noting that any fire or any of the Spanish techniques could not melt it.

Toward the end of the seventeenth century, when the Spanish conquistadors were looking for gold in the region that is now Colombia, they found silvery beads that they called "platina," or little silver. The metal also came to be called "platina del Pinto," meaning silvery beads from the Pinto River (in Colombia). The gold miners of that time, unaware of the value of the beads, simply tossed them away.

Details about the metal were recorded by Spanish astronomer Antonio de Ulloa and Don Jorge Juan y Santacilia, both appointed by King Philip V to join a geographical expedition in Peru that lasted from 1735 to 1745. Among other things, de Ulloa observed platina del Pinto to be an "unworkable" metal found with gold in New Granada (Colombia).

On de Ulloa's return voyage, British privateers attacked his ship, which was then handed over to the British Royal Navy. De Ulloa was forced to stay in London and his papers were confiscated. Fortunately, the Royal Society received him well, making him a Fellow in 1746. Two years later, he and Juan published their experiences in South America, including a reference to platinum. By then, British scientist Charles Wood had independently obtained the element from Jamaica in 1741. William Brownrigg and William Watson researched the material, and Watson reported their findings to the Royal Society in 1750.

The alchemical symbol for platinum (shown on the left) was made by joining the symbols of silver and gold. 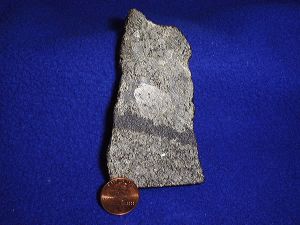 Platinum is an extremely rare metal, occurring as only 5 parts per billion in the Earth's crust. In certain regions of the Americas, platinum is often found free or alloyed with iridium as "platiniridium."

A major source of platinum is the ore sperrylite (platinum arsenide (PtAs2). It is also found in the mineral cooperite (platinum sulfide, PtS). This metal is often accompanied by small amounts of other platinum family metals (see below), which are found in alluvial deposits in Colombia, Ontario, the Ural Mountains, and locations in the western United States.

Platinum is also produced commercially as a by-product of nickel ore processing. The huge quantities of nickel ore processed compensates for the fact that platinum is present as only 0.5 parts per million in the ore. South Africa, with vast deposits in the Bushveld complex, is the world's largest producer of platinum, followed by Russia. 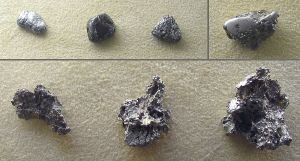 An assortment of native platinum nuggets

Platinum is a chemical element in the periodic table and is classified as a "transition metal." The pure metal has a silvery-white color and an extremely high melting point (3214.9 degrees F). It is heavy, malleable (can be reshaped by hammering or under pressure), and ductile (can be drawn out into wires). It is also an outstanding catalyst for certain chemical reactions. A mixture of hydrogen and oxygen explodes in its presence.

Platinum is remarkably resistant to corrosion, including chemical attack by hydrochloric acid and nitric acid. It does not oxidize in air at any temperature. It does, however, dissolve in the mixture of acids known as aqua regia (mixture of nitric acid and hydrochloric acid in the ratio 1:3) to form chloroplatinic acid. In addition, it can be corroded by cyanides, halogens, sulfur, and caustic alkalis.

Six elements in the periodic table are collectively known as the "platinum group" or "platinum family." They are ruthenium, rhodium, palladium, osmium, iridium, and platinum. They have similar physical and chemical properties, and tend to occur together in the same mineral deposits.

Platinum's rarity as a metal has led advertisers to associate it with exclusivity and wealth. "Platinum" credit cards have greater privileges than "gold" ones. "Platinum awards" are the highest possible, ranking above gold, silver, and bronze. A musical album that has sold more than one million copies is credited as "platinum." Some products, such as blenders and vehicles with a silvery-white color, are identified as "platinum" (although a higher certification of "diamond" does exist).

Platinum is considered a precious metal. Being resistant to tarnish and wear, it is well suited for making fine jewelry. Its price changes with availability, but it is usually rated higher than gold.

In the eighteenth century, King Louis XV of France declared platinum the only metal fit for a king. In addition, the frame of the Crown of Queen Elizabeth the Queen Mother, manufactured for her Coronation as Consort of King George VI, is made of platinum. It was the first British Crown to be made of that metal.

Based on its corrosion resistance and durability, a platinum-iridium alloy has served well in preserving standards of measurement. For instance, the definition of a meter was, for a long time, based on the distance between two marks on a bar of this alloy housed at the Bureau International des Poids et Mesures in Sèvres, France. Also, a platinum-iridium cylinder continues to serve as the standard of the kilogram and is housed in the same facility as the meter bar.

As an excellent catalyst, platinum is often used to catalyze chemical reactions in the laboratory and industry. Platinum-supported catalysts are used in the refining of crude oil, reforming, and other processes used in the production of high-octane gasoline and aromatic compounds for the petrochemical industry. Since 1979, the automotive industry has emerged as the principal consumer of platinum-group metals. Palladium, platinum, and rhodium have been used as oxidation catalyst in catalytic converters to treat automobile exhaust emissions. A wide range of platinum-group metal alloy compositions are used in low-voltage and low-energy contacts, thick- and thin-film circuits, thermocouples and furnace components, and electrodes.

Platinum, platinum alloys, and iridium are used as crucible materials for the growth of single crystals, especially oxides. The chemical industry uses a significant amount of either platinum or a platinum-rhodium alloy catalyst in the form of gauze to catalyze the partial oxidation of ammonia to yield nitric oxide—the raw material for fertilizers, explosives, and nitric acid.

Platinum compounds are rare in nature, but several have been prepared artificially. For instance, one of the most readily available compounds of platinum is chloroplatinic acid or hexachlorplatinic acid ([H3O]2[PtCl6].2H2O). It is produced by the reaction of platinum with aqua regia, and it is often used to measure the amount (or concentration) of potassium in a solution.

Another important compound of platinum is cisplatin, which is used as a chemotherapy drug to treat various types of cancers. It was the first member of its class, which now includes carboplatin and oxaliplatin.

"Adams' catalyst" is usually represented as platinum (IV) oxide hydrate (PtO2-H2O). It serves as a catalyst for organic reactions involving hydrogenation (addition of hydrogen) and hydrogenolysis (removal of hydrogen).

Platinum hexafluoride (PtF6) is an extremely strong fluorinating agent. Its fame derives from its ability, when in gaseous form and mixed with an excess of xenon, to form XePtF6 (xenon hexafluoroplatinate). This reaction, discovered by Neil Bartlett in 1962, proved that the noble gases are not totally unreactive. In addition, it is violently hydrolyzed by water to give hydrogen fluoride (HF).

Being an unreactive metal, platinum by itself normally does not cause health problems. On the other hand, certain platinum-based anti-cancer agents (such as cisplatin) can have toxic side effects, including cumulative, irreversible kidney damage.