In chemistry, the oxidation state is an indicator of the degree of oxidation of an atom in a chemical compound. The formal oxidation state is the hypothetical charge that an atom would have if all bonds to atoms of different elements were 100 percent ionic. Oxidation states are represented by Arabic numerals and can be positive, negative, or zero.

The concept of oxidation state in its current meaning was introduced by W. M. Latimer in 1938. Oxidation itself was first studied by Antoine Lavoisier, who held the belief that oxidation was literally the results of reactions of the elements with oxygen and that the common bond in any salt was based on oxygen.[1]

Here is the definition of the oxidation state, according to the International Union of Pure and Applied Chemistry (IUPAC):[2]

It should be remembered that the oxidation state of an atom does not represent the "real" charge on that atom: this is particularly true of high oxidation states, where the ionization energy required to produce a multiply positive ion are far greater than the energies available in chemical reactions. The assignment of electrons between atoms in calculating an oxidation state is purely a formalism, albeit a useful one for the understanding of many chemical reactions.

From a Lewis structure

When a Lewis structure of a molecule is available, the oxidation states may be assigned unambiguously by computing the difference between the number of valence electrons that a neutral atom of that element would have and the number of electrons that "belong" to it in the Lewis structure. For purposes of computing oxidation states, electrons in a bond between atoms of different elements belong to the most electronegative atom; electrons in a bond between atoms of the same element are split equally, and electrons in lone pair belong only to the atom with the lone pair.

The methyl group carbon atom has 6 valence electrons from its bonds to the hydrogen atoms because carbon is more electronegative than hydrogen. Also, 1 electron is gained from its bond with the other carbon atom because the electron pair in the C–C bond is split equally, giving a total of 7 electrons. A neutral carbon atom would have 4 valence electrons, because carbon is in group 14 of the periodic table. The difference, 4 – 7 = –3, is the oxidation state of that carbon atom. That is, if it is assumed that all the bonds were 100 percent ionic (which in fact they are not), the carbon would be described as C3-.

Oxidation states can be useful for balancing chemical equations for redox reactions, because the changes in the oxidized atoms have to be balanced by the changes in the reduced atoms. For example, in the reaction of acetaldehyde with the Tollens' reagent to acetic acid (shown below), the carbonyl carbon atoms changes its oxidation state from +1 to +3 (oxidation). This oxidation is balanced by reducing two equivalents of silver from Ag+ to Ago. 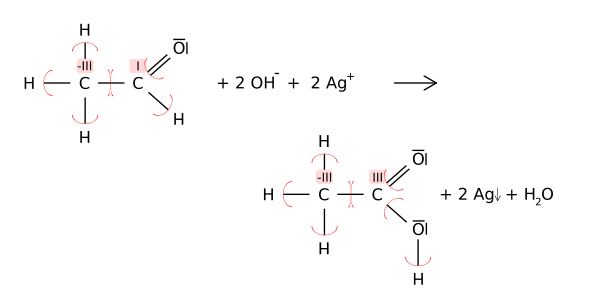 Without a Lewis structure

Most elements have more than one possible oxidation state, with carbon having nine, as follows: