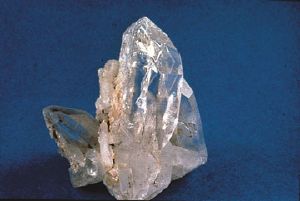 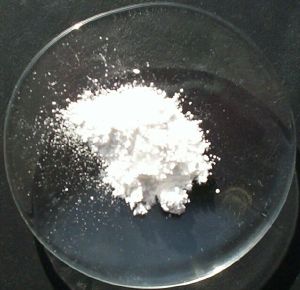 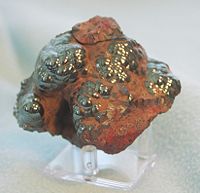 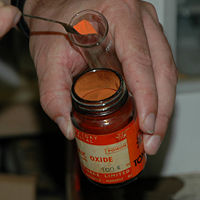 An oxide is a chemical compound consisting of molecules in which at least one oxygen atom is bonded to other elements. Most of the Earth's crust consists of oxides. Many oxides are produced when elements react with oxygen in the air. Several materials that are considered "pure elements" have an oxide coating. For example, aluminum foil has a thin skin of aluminum oxide (alumina, Al2O3) that protects the foil from further corrosion. The two principal oxides of carbon, carbon monoxide and carbon dioxide, are produced by the combustion of hydrocarbons. Water (H2O) may be considered an oxide of hydrogen.

In the eighteenth century, oxides were named calxes or calces, after the calcination process used to produce oxides. Calx was later replaced by oxyd.

Two other types of oxide are:

In such species, oxygen is assigned oxidation states higher than that of oxide (which is 2-).

Oxides of more electropositive elements (particularly metals) tend to be basic, and they are called basic anhydrides. Upon adding water, they may form basic hydroxides. For example, sodium oxide is basic; when hydrated, it forms sodium hydroxide.

Conversely, oxides of more electronegative elements tend to be acidic. They are called acid anhydrides. Upon adding water, they form oxoacids. For example, dichlorine heptoxide is an acidic oxide; perchloric acid is a hydrated form.

In some cases, an oxide can behave as an acid or a base, under different conditions. They are called amphoteric oxides. An example is aluminum oxide. Other oxides do not behave as either acid or base.

The oxide anion (O2−) is the conjugate base of the hydroxide ion (OH−) and is encountered in an ionic solid such as calcium oxide. The O2− anion is unstable in aqueous solution—its affinity for H+ is so great (pKb ~ -22) that it extracts a proton from a solvent H2O molecule:

The oxides of chemical elements in their highest oxidation state are predictable and their chemical formulas can be derived from the number of valence electrons in the atoms of those elements. One exception is copper, for which the highest oxidation state oxide is copper(II) oxide and not copper(I) oxide. Another exception is fluoride that does not exist as expected as F2O7 but as OF2, with the least electronegative element given priority.[1]. Phosphorus pentoxide, the third exception, is properly represented by the chemical formula P4O10, not P2O5.

Although many anions are stable in aqueous solution, ionic oxides are not. For example, sodium chloride dissolves readily in water to give a solution containing Na+ and Cl- ions. Oxides do not behave like this. When an ionic oxide dissolves, each O2− ion become protonated to form a hydroxide ion. Although calcium oxide (CaO) is said to "dissolve" in water, the products include hydroxide ions:

Concentrations of oxide ions in water are too low to be detectable with current technology.