Cerium (chemical symbol Ce, atomic number 58) is a silvery metallic element that is a member of the lanthanide series of chemical elements. It is considered one of the "rare earth metals," but it is not rare at all.[1] It is, in fact, more common than lead.

Cerium, its alloys, and its compounds are valuable for a variety of applications. For example, cerium is used in carbon-arc lighting in the motion picture industry and is an alloying agent in tungsten electrodes for gas tungsten arc welding. It is used in alloys for permanent magnets and is a major component of ferrocerium, also known as "lighter flint." It degasifies steels, reducing sulfides and oxides in them. Cerium(IV) oxide is used in incandescent gas mantles, and has largely replaced rouge in the glass industry as a polishing abrasive. The oxide is also useful as a catalyst for petroleum refining and for self cleaning ovens. Cerium(IV) sulfate is an oxidizing agent for quantitative chemical analyses, and cerium(III) chloride is a catalyst in organic synthetic reactions.

Cerium is the most abundant of the rare earth elements, making up about 0.0046 percent of the Earth's crust by weight. It is found in a number of minerals including allanite (also known as orthite) [(Ca, Ce, La, Y)2(Al, Fe)3(SiO4)3(OH)], monazite [(Ce, La, Th, Nd, Y)PO4], bastnasite[(Ce, La, Y)CO3F], hydroxylbastnasite [(Ce, La, Nd)CO3(OH, F)], rhabdophane [(Ce, La, Nd)PO4-H2O], zircon [ZrSiO4], and synchysite [Ca(Ce, La, Nd, Y)(CO3)2F]. Monazite and bastnasite are presently the two most important sources of cerium. The existence of large deposits of monazite, allanite, and bastnasite will supply cerium, thorium, and other rare-earth metals for many years to come. Cerium is most often prepared via an ion exchange process that uses monazite sands as its cerium source.

Cerium was discovered in Sweden by Jöns Jakob Berzelius and Wilhelm von Hisinger, and independently in Germany by Martin Heinrich Klaproth, both in 1803. Cerium was so named by Berzelius after the dwarf planet Ceres, discovered two years earlier (1801).

Cerium is an inner transition metal (or lanthanide) that lies in period six of the periodic table, between lanthanum and praseodymium. It resembles iron in color and luster, but it is soft, malleable, and ductile. It tarnishes readily in the air. Only europium is more reactive than cerium among rare earth elements. The pure metal is likely to ignite if scratched with a knife. It oxidizes slowly in cold water and rapidly in hot water. It is rapidly attacked by alkali solutions and acids. 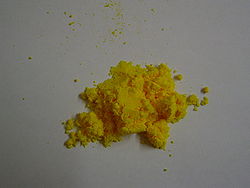 Cerium, like all rare earth metals, has low-to-moderate toxicity. It is a strong reducing agent and ignites spontaneously in air at 65 to 80 °C. Fumes from cerium fires are toxic. Water should not be used to stop cerium fires, as cerium reacts with water to produce hydrogen gas. Workers exposed to cerium have experienced itching, sensitivity to heat, and skin lesions. Animals injected with large doses of cerium have died due to cardiovascular collapse.

Cerium(IV) oxide is a powerful oxidizing agent at high temperatures and will react with combustible organic materials. While cerium is not radioactive, the impure commercial grade may contain traces of thorium, which is radioactive. Cerium serves no known biological function.