Neodymium[1] (chemical symbol Nd, atomic number 60) is a silvery metallic element that is a member of the lanthanide series of chemical elements. It is considered one of the "rare earth metals," but it is not rare when compared to the abundance of other metals.[2] It constitutes about 38 parts per million (ppm) of the Earth’s crust.

In nature, neodymium is found not as the free element but in ores such as monazite sand ((Ce,La,Th,Nd,Y)PO4) and bastnasite ((Ce,La,Th,Nd,Y)(CO3)F), which contain small amounts of various rare earth metals. Neodymium can also be found in Misch metal, an alloy of rare earth elements in a range of naturally occurring proportions. Its proportion in Misch metal can be as high as 18 percent. It is, however, difficult to separate neodymium from other rare earth elements.

Neodymium was discovered by Baron Carl Auer von Welsbach, an Austrian chemist, in Vienna in 1885. He analyzed the material known as didymium[3] and separated the elements neodymium and praseodymium from it. Neodymium, however, was not isolated in relatively pure form until 1925. The name neodymium is derived from the Greek words neos, meaning "new," and didymos, meaning "twin."

Today, neodymium is primarily obtained through an ion exchange process of monazite sand ((Ce,La,Th,Nd,Y)PO4), a material rich in rare earth elements, and through electrolysis of its halide salts.

Neodymium is an inner transition metal (or lanthanide) that lies in period 6 of the periodic table, between praseodymium and promethium. It has a bright, silvery metallic luster, but as one of the more reactive rare earth metals, it quickly tarnishes in air. The tarnishing process involves the formation of an oxide layer that falls off, exposing the metal to further oxidation.

Neodymium compounds include the following: 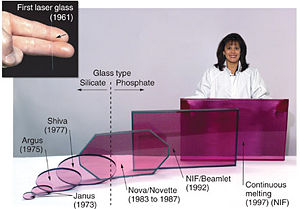 Neodymium metal dust is a combustion and explosion hazard.

Neodymium compounds, like all rare earth metals, are of low to moderate toxicity; however, its toxicity has not been thoroughly investigated. Neodymium dust and salts are very irritating to the eyes and mucous membranes, and moderately irritating to skin. Breathing the dust can cause lung embolisms, and accumulated exposure damages the liver. Neodymium also acts as an anticoagulant, especially when given intravenously.

Neodymium magnets have been tested for medical uses such as magnetic braces and bone repair, but biocompatibility issues have prevented widespread application.

Retrieved from https://www.newworldencyclopedia.org/p/index.php?title=Neodymium&oldid=1086997
Categories:
Hidden category:
This page was last edited on 11 November 2022, at 16:18.
Content is available under Creative Commons Attribution/Share-Alike License; additional terms may apply. See Terms of Use for details.