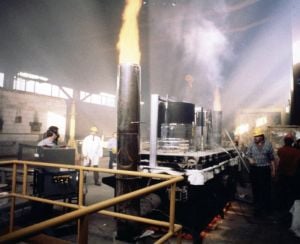 Fire test used to test the heat transfer through firestops and penetrants used in construction listing and approval use and compliance.

, is the property of a material that indicates its ability to conduct heat. It appears primarily in Fourier's Law for heat conduction.

Conduction is the most significant means of heat transfer in a solid. By knowing the values of thermal conductivities of various materials, one can compare how well they are able to conduct heat. The higher the value of thermal conductivity, the better the material is at conducting heat. On a microscopic scale, conduction occurs as hot, rapidly moving or vibrating atoms and molecules interact with neighboring atoms and molecules, transferring some of their energy (heat) to these neighboring atoms. In insulators the heat flux is carried almost entirely by phonon vibrations.

First, heat conduction can be defined by the formula:

is the temperature gradient)

In other words, it is defined as the quantity of heat, ΔQ, transmitted during time Δt through a thickness x, in a direction normal to a surface of area A, due to a temperature difference ΔT, under steady state conditions and when the heat transfer is dependent only on the temperature gradient.

Alternately, it can be thought of as a flux of heat (energy per unit area per unit time) divided by a temperature gradient (temperature difference per unit length)

In metals, thermal conductivity approximately tracks electrical conductivity according to the Wiedemann-Franz law, as freely moving valence electrons transfer not only electric current but also heat energy. However, the general correlation between electrical and thermal conductance does not hold for other materials, due to the increased importance of phonon carriers for heat in non-metals. As shown in the table below, highly electrically conductive silver is less thermally conductive than diamond, which is an electrical insulator.

Air and other gases are generally good insulators, in the absence of convection. Therefore, many insulating materials function simply by having a large number of gas-filled pockets which prevent large-scale convection. Examples of these include expanded and extruded polystyrene (popularly referred to as "styrofoam") and silica aerogel. Natural, biological insulators such as fur and feathers achieve similar effects by dramatically inhibiting convection of air or water near an animal's skin.

Thermal conductivity is important in building insulation and related fields. However, materials used in such trades are rarely subjected to chemical purity standards. Several construction materials' k values are listed below. These should be considered approximate due to the uncertainties related to material definitions.

The following table is meant as a small sample of data to illustrate the thermal conductivity of various types of substances. For more complete listings of measured k-values, see the references.

Generally speaking, there are a number of possibilities to measure thermal conductivity, each of them suitable for a limited range of materials, depending on the thermal properties and the medium temperature. There can be made a distinction between steady-state and transient techniques.

In general the steady-state techniques perform a measurement when the temperature of the material that is measured does not change with time. This makes the signal analysis straight forward (steady state implies constant signals). The disadvantage generally is that it takes a well-engineered experimental setup. The Divided Bar (various types) is the most common device used for consolidated rock samples.

The transient techniques perform a measurement during the process of heating up. The advantage is that measurements can be made relatively quickly. Transient methods are usually carried out by needle probes (inserted into samples or plunged into the ocean floor).

Difference between US and European notation

In Europe, the k-value of construction materials (e.g. window glass) is called λ-value.

U-value used to be called k-value in Europe, but is now also called U-value.

K-value (with capital k) refers in Europe to the total isolation value of a building. K-value is obtained by multiplying the form factor of the building (= the total inward surface of the outward walls of the building divided by the total volume of the building) with the average U-value of the outward walls of the building. K-value is therefore expressed as (m2.m-3).(W.K-1.m-2) = W.K-1.m-3. A house with a volume of 400 m³ and a K-value of 0.45 (the new European norm. It is commonly referred to as K45) will therefore theoretically require 180 W to maintain its interior temperature 1 degree K above exterior temperature. So, to maintain the house at 20°C when it is freezing outside (0°C), 3600 W of continuous heating is required.

The reciprocal of thermal conductivity is thermal resistivity, measured in kelvin-metres per watt (K·m·W−1).

When dealing with a known amount of material, its thermal conductance and the reciprocal property, thermal resistance, can be described. Unfortunately there are differing definitions for these terms.

There is also a measure known as heat transfer coefficient: the quantity of heat that passes in unit time through unit area of a plate of particular thickness when its opposite faces differ in temperature by one degree. The reciprocal is thermal insulance. In summary:

The heat transfer coefficient is also known as thermal admittance

When thermal resistances occur in series, they are additive. So when heat flows through two components each with a resistance of 1 °C/W, the total resistance is 2 °C/W.

A common engineering design problem involves the selection of an appropriate sized heat sink for a given heat source. Working in units of thermal resistance greatly simplifies the design calculation. The following formula can be used to estimate the performance:

In summary, for a plate of thermal conductivity k (the k value[10]), area A and thickness L:

In textiles, a tog value may be quoted as a measure of thermal resistance in place of a measure in SI units.

The first approach employs the Green-Kubo relations. Although this employs analytic expressions which in principle can be solved, in order to calculate the thermal conductivity of a dense fluid or solid using this relation requires the use of molecular dynamics computer simulation.

The second approach is based upon the relaxation time approach. Due to the anharmonicity within the crystal potential, the phonons in the system are known to scatter. There are three main mechanisms for scattering (Srivastava, 1990):