Thermal energy, in the form of continuous random motion of particles of matter, is transferred by the same coulomb forces that act to support the structure of matter. For this reason, its transfer can be said to occur by physical contact between the particles.

Besides conduction, heat can also be transferred by radiation and convection, and often more than one of these processes may occur in a given situation.

The law of heat conduction, also known as Fourier's law, states that the time rate of heat transfer through a material is proportional to the negative gradient in the temperature and to the area at right angles, to that gradient, through which the heat is flowing. This law can be stated in two equivalent forms:

In the differential formulation of Fourier's law, the fundamental quantity is the local heat flux

. This is the amount of energy flowing through an infinitesimal oriented surface per unit of time. The length of

is given by the amount of energy per unit of time, and the direction is given by the vector perpendicular to the surface. As a vector equation, this leads to:

is the local heat flux, in Watts per square meter (W•m−2),

is the material's thermal conductivity, in Watts per meter per degree Kelvin (W•m−1•K−1),

is the temperature gradient, in degrees Kelvin per meter (K•m−1)

By integrating the differential form over the material's total surface

, we arrive at the integral form of Fourier's law:

is the amount of heat transferred per unit time, in Watts (W) or Joules per second (J•s-1),

is the surface through which the heat is flowing, in square meters (m2). 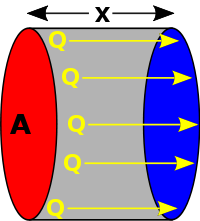 Diagram of linear heat flow, from a hotter surface (red) to a cooler surface (blue).

Consider a simple linear situation (see diagram), where there is uniform temperature across equally sized end surfaces and the sides are perfectly insulated. In such a case, integration of the above differential equation gives the heat flow rate between the end surfaces as:

A is the cross-sectional surface area,

is the temperature difference between the ends,

is the distance between the ends.

This law forms the basis for derivation of the heat equation.

The R-value is the unit for heat resistance, the reciprocal of heat conductance.

Ohm's law is the electrical analog of Fourier's law.

) can be defined as:

where the units for

Thus, Fourier's law can also be stated as:

The reciprocal of conductance is resistance, R. It is given by:

Resistance is additive when several conducting layers lie between the hot and cool regions, because A and Q are the same for all layers. In a multilayer partition, the total conductance is related to the conductance of its layers by the following equation:

So, when dealing with a multilayer partition, the following formula is usually used:

When heat is being conducted from one fluid to another through a barrier, it is sometimes important to consider the conductance of the thin film of fluid which remains stationary next to the barrier. This thin film of fluid is difficult to quantify, its characteristics depending upon complex conditions of turbulence and viscosity, but when dealing with thin high-conductance barriers it can sometimes be quite significant.

Ideally, the formulae for conductance should produce a quantity with dimensions independent of distance, like Ohm's Law for electrical resistance:

From the electrical formula:

, where ρ is resistivity, x = length, A cross sectional area, we have

, where G is conductance, k is conductivity, x = length, A cross sectional area.

where U is the conductance.

Fourier's law can also be stated as:

The reciprocal of conductance is resistance, R, given by:

The sum of conductances in series is still correct.