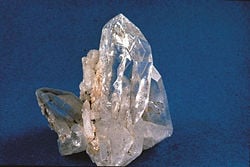 A quartz crystal is an example of a crystalline solid.

A solid is one of the four principal states of matter. A solid object is characterized by resistance to deformation and change of volume. The branch of physics that deals with solids is called solid-state physics, and it is a type of condensed matter physics. Materials science is primarily concerned with properties of solids such as strength and phase transformations. It overlaps strongly with solid-state physics. Solid-state chemistry overlaps both these fields, but it is especially concerned with the synthesis of novel materials.

On the level of atoms and molecules, a solid has these properties :

The lightest known solid is man-made and is called aerogel. The lightest aerogel produced has a density of 1.9 mg/cm3 or 1.9 kg/m3 (1/530 as dense as water).

Quantities of solids are commonly measured in units of mass and volume. Units of mass include grams, kilograms (an SI unit), and pounds; units of volume include the cubic meter (m³) (an SI unit).