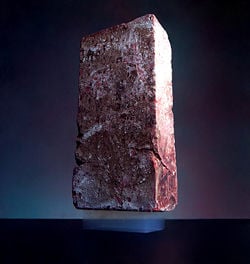 A 2.5 kg brick is supported by a piece of aerogel weighing only two grams.

An aerogel is a low-density solid-state material derived from a gel in which the liquid component of the gel has been replaced with gas. The result is an extremely low-density, highly porous solid with several remarkable properties, most notably its effectiveness as an insulator. It is nicknamed frozen smoke due to its semi-transparent nature and the way light scatters in the material. It feels like expanded polystyrene (Styrofoam) to the touch. 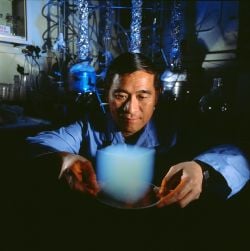 Peter Tsou of NASA's Jet Propulsion Laboratory holds a sample of an aerogel.

Aerogels are useful for a variety of applications. Some are good for thermal insulation and for cleaning up chemical spills. Others, when appropriately prepared, offer a useful drug delivery system for medical treatments. Carbon aerogels are used in the manufacture of small electrochemical double-layer supercapacitors. Some aerogels have been incorporated into tennis and squash racquets. In space exploration, aerogel materials have been used to trap space dust. By the addition of dopants, reinforcing structures, and hybridizing compounds to aerogels, the range of applications has been considerably broadened.

The general method of producing an aerogel involves extracting the liquid component of a gel by a technique known as supercritical drying. In this technique, the liquid is brought to a "supercritical" state and then drawn out of the solid matrix of the gel. (When a substance is in its supercritical state, the distinction between its liquid and gas phases ceases to apply.) This method prevents the solid matrix from collapsing, as would happen with conventional evaporation.

An aerogel was first created by Samuel Stephens Kistler in 1931, as a result of a bet with Charles Learned over who could replace the liquid inside a jam (jelly) jar with gas without causing shrinkage.[1][2] Kistler produced the first aerogel from a colloidal form of silica gel. His later work involved the production of aerogels from alumina, chromium(III) oxide, and tin oxide. Carbon aerogels were first developed in the early 1990s.[3]

Silica aerogel can be made by drying (in an extreme environment) a hydrogel composed of colloidal silica, with water as the dispersion medium. Alternatively, the process may be started by mixing a liquid alcohol (like ethanol) with a silicon alkoxide precursor to form an "alcogel." Then the alcohol may be exchanged for liquid acetone (allowing for a better miscibility gradient), followed by liquid carbon dioxide, which is then brought above its critical point. A variant of this process involves the direct injection of supercritical carbon dioxide into the pressure vessel containing the aerogel. The end result removes all liquid from the gel and replaces it with gas, without allowing the gel structure to collapse or lose volume.

Resorcinol-formaldehyde aerogel (RF aerogel) is a polymer chemically similar to a phenol formaldehyde resin. It is made in a way similar to the production of silica aerogel.

Carbon aerogel is made by the pyrolysis of a resorcinol-formaldehyde aerogel in an inert gas atmosphere, leaving a matrix of carbon. It is commercially available as solid shapes, powders, or composite paper. 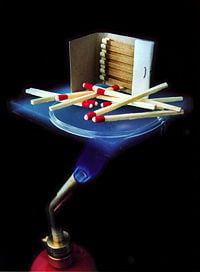 A demonstration of aerogel's insulation properties.

Kistler gave the name aerogel because he derived it from silica gel. However, an aerogel is a dry material and does not resemble a gel in its physical properties. It is nicknamed frozen smoke,[4] solid smoke, or blue smoke, due to its semi-transparent nature and the way light scatters in the material. To the touch, an aerogel feels like a light but rigid foam, something between Styrofoam and the green floral foam used for arranging flowers. Pressing softly on an aerogel typically does not leave a mark, but pressing more firmly leaves a permanent dimple. Pressing firmly enough will cause a catastrophic breakdown in the sparse structure, causing it to shatter like glass—a property known as friability.

Although prone to shattering, an aerogel is very strong structurally. Its impressive load-bearing abilities are due to the dendritic microstructure, in which spherical particles of average size 2-5 nanometers (nm) are fused together into clusters. These clusters form a three-dimensional, highly porous structure of almost fractal chains, with pores smaller than 100 nm. The average size and density of the pores can be controlled during the manufacturing process.

Aerogels are remarkable thermal insulators because they almost nullify three methods of heat transfer: convection, conduction, and radiation. They are good convective inhibitors because air cannot circulate throughout the lattice. Silica aerogel is an especially good conductive insulator because silica is a poor conductor of heat—a metallic aerogel, on the other hand, would be a less effective insulator. Carbon aerogel is a good radiative insulator because carbon absorbs the infrared radiation that transfers heat. The most insulative aerogel is silica aerogel with carbon added to it.

Due to its hygroscopic nature, an aerogel feels dry and acts as a strong desiccant. People who handle aerogels for extended periods of time should wear gloves to prevent the appearance of dry brittle spots on their hands.

Given that it is 99 percent air, an aerogel appears semi-transparent. Its color is due to Rayleigh scattering of the shorter wavelengths of visible light by the nano-sized dendritic structure. This causes it to appear bluish against dark backgrounds and whitish against bright backgrounds.

Aerogels by themselves are hydrophilic, but chemical treatment can make them hydrophobic. If they absorb moisture, they usually suffer a structural change (such as contraction) and deteriorate, but degradation can be prevented by making them hydrophobic. Aerogels with hydrophobic interiors are less susceptible to degradation than aerogels with only an outer hydrophobic layer, even if a crack penetrates the surface. Hydrophobic treatment facilitates processing because it allows the use of a water jet cutter. 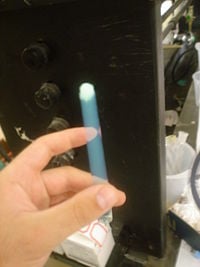 Silica aerogel is the most common type of aerogel and the most extensively studied and used. It is a silica-based substance, derived from silica gel. The world's lowest-density solid is a silica nanofoam at 1 mg/cm3[5] which is the evacuated version of the record-aerogel of 1.9 mg/cm3[6]. The density of air is 1.2 mg/cm3.

Silica aerogel strongly absorbs infrared radiation. It allows the construction of materials that let light into buildings but trap heat for solar heating.

Carbon aerogels are composed of particles with sizes in the nanometer range, covalently bonded together. They have very high porosity (over 50 percent, with pore diameter under 100 nm) and surface areas ranging between 400–1000 m²/g. They are often manufactured as composite paper: non-woven paper made of carbon fibers, impregnated with resorcinol-formaldehyde aerogel, and pyrolyzed. Depending on the density, carbon aerogels may be electrically conductive, making composite aerogel paper useful for electrodes in capacitors or deionization electrodes. Due to their extremely high surface area, carbon aerogels are used to create supercapacitors, with values ranging up to thousands of farads based on a capacitance of 104 F/g and 77 F/cm³. Carbon aerogels are also extremely "black" in the infrared spectrum, reflecting only 0.3 percent of radiation between 250 nm and 14.3 µm, making them efficient for solar energy collectors.

The term "aerogel" has been incorrectly used to describe airy masses of carbon nanotubes produced through certain chemical vapor deposition techniques—such materials can be spun into fibers with strength greater than kevlar and unique electrical properties. These materials are not aerogels, however, since they do not have a monolithic internal structure and do not have the regular pore structure characteristic of aerogels.

Aerogels made with aluminium oxide are known as alumina aerogels. These aerogels are used as catalysts, especially when "metal-doped" with another metal. Nickel-alumina aerogel is the most common combination. Alumina aerogels are also examined by NASA for capturing of hypervelocity particles; a formulation doped with gadolinium and terbium could fluoresce at the particle impact site, with amount of fluorescence dependent on impact velocity.

SEAgel is a material similar to organic aerogel, made of agar.

Chalcogels, more correctly known as metal chalcogenide aerogels, are a group of aerogels made of a chalcogen (such as sulfur or selenium) combined with a metal (often platinum).[7] Research is ongoing, and metals less expensive than platinum have also been used in creating chalcogels. 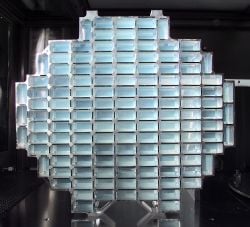 Aerogels can be used for a variety of tasks, a number of which are noted below.