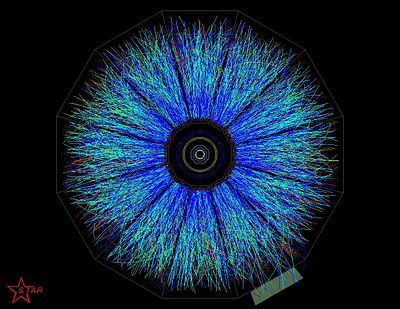 Particles erupt from the collision point of two relativistic (100GeV) gold ions in the STAR detector of the Relativistic Heavy Ion Collider. Electrically charged particles are discernable by the curves they trace in the detector's magnetic field.

Particle physics is a branch of physics that studies the elementary constituents of matter and radiation, and the interactions between them. It is also called high energy physics, because many elementary particles do not occur under normal circumstances in nature, but can be created and detected during energetic collisions of other particles, as is done in particle accelerators.

Our understanding of the nature of physical existence derives in large part from the theories of particle physics. The elementary particles are the ground of existence but there is some mystery attached to how they exist. Described by quantum mechanics, they can be viewed as structureless and dimensionless points or as waves. All other particles are complex entities that derive their three-dimensional existence from the relationships of their constituent elementary particles.

Modern particle physics research is focused on subatomic particles, which have less structure than atoms. These include matter particles such as the electron, proton, and neutron (protons and neutrons are actually composite particles, made up of quarks), as well as the force-carrying particles, such as photons and gluons and a wide variety of exotic particles.

Strictly speaking, the term particle is something of a misnomer. The objects studied by particle physics obey the principles of quantum mechanics. As such, they exhibit wave-particle duality, displaying particle-like behavior under certain experimental conditions and wave-like behavior in others. Theoretically, they are described neither as waves nor as particles, but as state vectors in an abstract Hilbert space. For a more detailed explanation, see quantum field theory. Following the convention of particle physicists, "elementary particles" is used to refer to objects such as electrons and photons, with the understanding that these "particles" display wave-like properties as well.

All the particles observed to date have been catalogued in a quantum field theory called the Standard Model, which is often regarded as particle physics' best achievement to date. The Standard Model combines quantum electrodynamics and quantum chromodynamics in a coherent conceptual framework that describes the elementary subatomic particles and three of the four interactions. It contains 12 types of matter particles arranged in three generations of increasing energy, and their corresponding antiparticles. The model also describes the strong, weak, and electromagnetic interactions in terms of an exchange of force-carrying particles; gluons, W and Z bosons, and photons. Combinations of the elementary particles account for the hundreds of other species of particles discovered since the 1960s. The Standard Model has been found to agree with almost all the experimental tests conducted to date. However, most particle physicists believe that it is an incomplete description of nature, and that a more fundamental theory awaits discovery. In recent years, measurements of neutrino mass have provided the first experimental deviations from the Standard Model.

Particle physics has had a large impact on the philosophy of science. Some in the field still adhere to reductionism, an older concept that has been criticized by various philosophers and scientists. Part of the debate is described below.

The idea that matter is composed of elementary particles dates to at least the sixth century B.C.E. The philosophical doctrine of "atomism" was studied by ancient Greek philosophers such as Leucippus, Democritus, and Epicurus. Although Isaac Newton in the seventeenth century C.E. thought that matter was made up of particles, it was John Dalton who formally stated in 1802 that everything is made from tiny atoms.

Dmitri Mendeleev's first periodic table in 1869 helped cement the view, prevalent throughout the nineteenth century, that matter was made of atoms. Work by J.J. Thomson in the late 1890s established that electrons are components of atoms. Ernest Rutherford established in 1911 that the atoms have a compact nucleus that contains most of the mass and the positive charge of the atom. The nucleus was initially thought to be composed of protons and confined electrons (in order to explain the difference between nuclear charge and mass number), but was later found to be composed of protons and neutrons.

The early twentieth-century explorations of nuclear physics and quantum physics culminated in proofs of nuclear fission in 1939 by Lise Meitner (based on experiments by Otto Hahn), and nuclear fusion by Hans Bethe in the same year. These discoveries gave rise to an active industry of generating one atom from another, even rendering possible (although not profitable) the transmutation of lead into gold. These theories successfully predicted nuclear weapons.

Throughout the 1950s and 1960s, a bewildering variety of particles was found in scattering experiments. This was referred to as the "particle zoo." In 1963, Murray Gell-Mann proposed the quark model for classifying these particles that greatly simplified the situation. Then in the early 1970s, a quantum theory for the strong nuclear interaction was developed called quantum chromodynamics. This was the final step in the formulation of the Standard Model in which the large number of particles was explained as combinations of a (relatively) small number of fundamental particles.

In particle physics, the major international collaborations are:

Many other particle accelerators exist.

The techniques required to do modern experimental particle physics are quite varied and complex, constituting a subspecialty nearly completely distinct from the theoretical side of the field.

One of the major activities in theoretical particle physics is the attempt to better understand the Standard Model and its tests. By extracting the parameters of the Standard Model from experiments with less uncertainty, this work probes the limits of the Standard Model and therefore expands the understanding of nature. These efforts are made challenging by the difficult nature of calculating many quantities in quantum chromodynamics. Some theorists making these efforts refer to themselves as phenomenologists and may use the tools of quantum field theory and effective field theory. Others make use of lattice field theory and call themselves lattice theorists.

Another major effort is in model building where model builders develop ideas for what physics may lie beyond the Standard Model (at higher energies or smaller distances). This work is often motivated by the hierarchy problem and is constrained by existing experimental data. It may involve work on supersymmetry, alternatives to the Higgs mechanism, extra spatial dimensions (such as the Randall-Sundrum models), Preon theory, combinations of these, or other ideas.

A third major effort in theoretical particle physics is string theory. String theorists attempt to construct a unified description of quantum mechanics and general relativity by building a theory based on small strings and branes rather than particles. If the theory is successful in this, it may be considered a "Theory of Everything."

There are also other areas of work in theoretical particle physics ranging from particle cosmology to loop quantum gravity.

This divide of efforts in particle physics is reflected in the names of categories on the preprint archive [1]: hep-th (theory), hep-ph (phenomenology), hep-ex (experiments), hep-lat (lattice gauge theory).

Throughout the development of particle physics, there have been many objections to the extreme reductionist approach of attempting to explain everything in terms of elementary particles and their interaction. These objections have been raised by people from a wide array of fields, including many modern particle physicists, solid state physicists, chemists, biologists, and metaphysical holists. While the Standard Model itself is not challenged, it is contended that the properties of elementary particles are no more (or less) fundamental than the emergent properties of atoms and molecules, and especially statistically large ensembles of those. Composite entities have characteristics of their own in addition to that of their constituent particles. Hence, even a complete knowledge of the underlying elementary particles will not lend a thorough understanding of more complicated natural processes. Other critics question whether a complete knowledge of particle behavior (as part of a larger process) can even be attained, thanks to quantum indeterminacy.

Reductionists typically claim that all progress in the sciences has involved reductionism to some extent.

Many have argued that the potential advances do not justify the money spent, and that in fact particle physics takes money away from more important research and education efforts. In 1993, the U.S. Congress stopped the Superconducting Super Collider because of similar concerns, after $2 billion had already been spent on its construction. Many scientists, both supporters and opponents of the SSC, believe that the decision to stop construction of the SSC was due in part to the end of the Cold War, which removed scientific competition with the Soviet Union as a rationale to spend large amounts of money on the SSC.

Some within the scientific community believe that particle physics has also been adversely affected by the aging population. The belief is that the aging population is much more concerned with immediate issues of their health and their parents' health and that this has driven scientific funding away from physics toward the biological and health sciences. In addition, many opponents question the ability of any single country to support the expense of particle physics results and fault the SSC for not seeking greater international funding.

Proponents of particle accelerators hold that the investigation of the most basic theories deserves adequate funding, and that this funding benefits other fields of science in various ways. They point out that all accelerators today are international projects and question the claim that money not spent on accelerators would then necessarily be used for other scientific or educational purposes.

The future of particle physics

Particle physicists internationally agree on the most important goals of particle physics research in the near and intermediate future. The overarching goal, which is pursued in several distinct ways, is to find and understand what physics may lie beyond the Standard Model. There are several powerful experimental reasons to expect new physics, including dark matter and neutrino mass. There are also theoretical hints that this new physics should be found at accessible energy scales. Most importantly, though, there may be unexpected and unpredicted surprises that will give the most opportunity to learn about nature.

Much of the efforts to find this new physics are focused on new collider experiments. A (relatively) near-term goal is the completion of the Large Hadron Collider (LHC) in 2007, which will continue the search for the Higgs boson, supersymmetric particles, and other new physics. An intermediate goal is the construction of the International Linear Collider (ILC), which will complement the LHC by allowing more precise measurements of the properties of newly found particles. A decision for the technology of the ILC has been taken in August 2004, but the site has still to be agreed upon.

Additionally, there are important non-collider experiments that also attempt to find and understand physics beyond the Standard Model. One important non-collider effort is the determination of the neutrino masses since these masses may arise from neutrinos mixing with very heavy particles. In addition, cosmological observations provide many useful constraints on the dark matter, although it may be impossible to determine the exact nature of the dark matter without the colliders. Finally, lower bounds on the very long life time of the proton put constraints on Grand Unification Theories at energy scales much higher than collider experiments will be able to probe anytime soon.