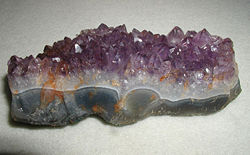 As research into matter has moved from investigations of large-scale properties of objects to their fundamental constituents, the scientific understanding of matter has dramatically changed over time. Shown here is a bed of amethyst crystals on base rock.

Matter is commonly thought of as the material that composes physical objects—that is, objects that have mass and occupy space. It can occur in any of a variety of phases, such as solid, liquid, gas, plasma, superfluid, and Bose-Einstein condensate. The various types of energy and force fields are not usually considered matter per se, although force fields may contribute to the mass of objects.

This view of matter has been very useful for everyday, practical work, and most technologies are based on this understanding, at least implicitly. Yet, as research into matter has moved from investigations of large-scale properties of objects to their fundamental constituents, the scientific understanding of matter has dramatically changed over time.

For most studies in chemistry, matter is considered in terms of chemical substances (chemical elements and chemical compounds) and their mixtures. A chemical substance is made of atoms, which are made of protons, neutrons, and electrons.

In physics, however, there is no broad consensus on an exact definition of matter. Physicists generally do not use the word when precision is needed, preferring to speak of the more clearly defined concepts of mass, energy, and particles.

A possible definition of matter that at least some physicists use[1] is that it is everything that is constituted of elementary fermions. According to the Standard Model, the current theory of fundamental particles and how they interact, there are a dozen fundamental fermions, six of which are called quarks, and the other six, leptons. The common electron is one of the six leptons and each proton or neutron comprises three quarks. (See Subatomic particle.)

Given that protons, neutrons, and electrons combine to form atoms, one can say that atoms, molecules, and the bulk substances that they make up are all part of "matter." In addition, matter, in the Standard Model, comprises a variety of very short-lived particles classified either as baryons—if they, like protons and neutrons, are made up of three quarks—or mesons if they are made up of one quark and one antiquark. Entities not considered to be matter include the virtual particles carrying the fundamental forces of nature; light (photons), which are the carrier of the electromagnetic force, and other gauge bosons.

Fuzzy edges on the definitions

The Standard Model's definition of matter proves to be incomplete in accounting for mass at the most fundamental levels of matter. In particular, under this theory, some things that have mass would not be considered matter:

In addition, by the same definition, some things would be called matter even if they do not have mass:

In particle physics and quantum chemistry, "antimatter" is matter comprising "antiparticles," such as antielectrons (positrons), antiprotons, and antineutrons. Given this concept of antimatter, the term "matter" can have two meanings, one of which includes the other:

The same difficulty arises when using the terms "particles" and "antiparticles."

Quarks combine to form hadrons such as the protons and neutrons in the nucleus of an atom. Based on a principle known as "color confinement," which is part of the theory of strong interactions, single quarks never exist unbound from other quarks. Protons and neutrons, which are found in the nuclei of atoms, are examples of hadrons.

Leptons, on the other hand, do not feel the strong force and can exist unattached to other particles. On Earth, electrons are generally bound in atoms, but it is easy to free them, such as in a cathode ray tube. Muons may briefly form bound states known as muonic atoms. Neutrinos feel neither the strong force nor electromagnetic interactions. They are never bound to other particles.[1]

Bulk matter may be categorized as either homogeneous or heterogeneous.

In bulk, matter can exist in several different phases, according to the conditions of pressure and temperature. A phase is a state of a macroscopic physical system that has relatively uniform chemical composition and physical properties (such as density, crystal structure, and refractive index). These phases include the three familiar ones: solids, liquids, and gases. Additional phases include plasmas, superfluids, supersolids, Bose-Einstein condensates, fermionic condensates, liquid crystals, strange matter, and quark-gluon plasmas. There are also the paramagnetic and ferromagnetic phases of magnetic materials. As conditions change, matter may change from one phase to another. These changes are called phase transitions, and their energetics are studied in the field of thermodynamics.

In small quantities, matter can exhibit properties that are entirely different from those of bulk material and may not be well described by any phase.

Antimatter comprises collections of antiparticles existing in forms corresponding to the forms of normal matter. If a particle and its antiparticle come into contact with each other, the two annihilate; that is, they may both be converted into other particles with equal energy in accordance with Einstein's equation E = mc2. These new particles may be high-energy photons (gamma rays) or other particle–antiparticle pairs. The resulting particles are endowed with an amount of kinetic energy equal to the difference between the rest mass of the products of the annihilation and the rest mass of the original particle-antiparticle pair, which is often quite large.

Antimatter is not found naturally on Earth, except very briefly and in vanishingly small quantities (as the result of radioactive decay or cosmic rays). This is because antimatter which came to exist on Earth outside the confines of a suitable physics laboratory would almost instantly meet the ordinary matter that Earth is made of, and be annihilated. Antiparticles and some stable antimatter (such as antihydrogen) can be made in tiny amounts, but not in enough quantity to do more than test a few of its theoretical properties.

There is considerable speculation as to why the observable universe is apparently almost entirely matter, and what might be possible if antimatter could be harnessed. The apparent asymmetry of matter and antimatter in the visible universe is one of the great unsolved problems in physics.

In cosmology, most models of the early universe and the Big Bang theory require the existence of what is called dark matter. This matter is thought to have energy and mass, but it would not be composed of either elementary fermions (as above) or gauge bosons. As such, it would be composed of particles unknown to present science. Its existence is inferential, at this point.