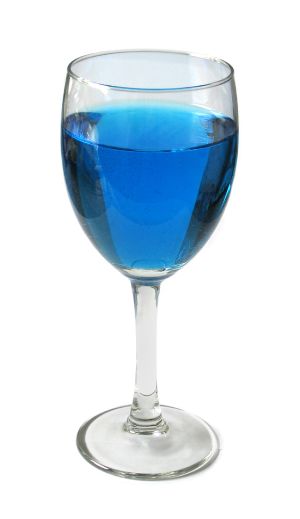 A liquid will usually assume the shape of its container. 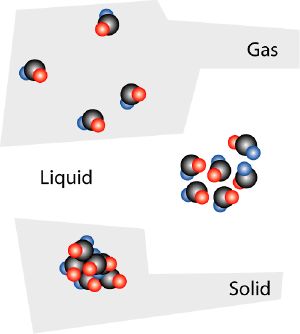 A diagram of how the configuration of molecules/atoms differs for the solid, liquid, and gas phases. 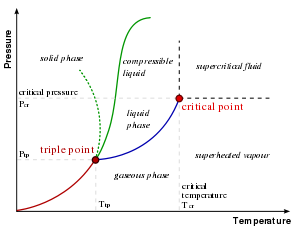 A liquid is one of the four principal states of matter. It is a fluid that can freely form a distinct surface at the boundaries of its bulk material. The main liquid found on Earth is water, which is essential to sustain life.

A liquid's shape is determined by, not confined to, the container it fills. That is to say, liquid particles (normally molecules or clusters of molecules) are free to move within the volume, but they form a discrete surface that may not necessarily be the same as the vessel. The same cannot be said about a gas; it can also be considered a fluid, but it must conform to the shape of the container entirely.

At a temperature below the boiling point, a liquid will evaporate until, if in a closed container, the concentration of the vapors belonging to the liquid reach an equilibrium partial pressure in the gas. Therefore no liquid can exist permanently in a vacuum. The surface of the liquid behaves as an elastic membrane in which surface tension appears, allowing the formation of drops and bubbles. Capillarity is another consequence of surface tension. Only liquids can display immiscibility. The most familiar mixture of two immiscible liquids in everyday life are the vegetable oil and water in Italian salad dressing. A familiar set of miscible liquids are water and alcohol. Only liquids display wetting properties.

Liquids at their respective boiling point change to gases (except when superheating occurs), and at their freezing points, change to solids (except when supercooling occurs). Even below the boiling point liquid evaporates on the surface. Objects immersed in liquids are subject to the phenomenon of buoyancy, which is also observed in other fluids, but is especially strong in liquids due to their high density. Liquid components in a mixture can often be separated from one another via fractional distillation.

The volume of a quantity of liquid is fixed by its temperature and pressure. Unless this volume exactly matches the volume of the container, a surface is observed. Liquids in a gravitational field, like all fluids, exert pressure on the sides of a container as well as on anything within the liquid itself. This pressure is transmitted in all directions and increases with depth. In the study of fluid dynamics, liquids are often treated as incompressible, especially when studying incompressible flow.

If a liquid is at rest in a uniform gravitational field, the pressure

at any point is given by

= the density of the liquid (assumed constant)

= the depth of the point below the surface

Note that this formula assumes that the pressure at the free surface is zero, and that surface tension effects may be neglected.

Liquids generally expand when heated, and contract when cooled. Water between 0 °C and 4 °C is a notable exception—this is why ice floats. Liquids have little compressibility—water, for example, does not change its density appreciably unless subject to pressure of the order of hundreds bar.

Examples of everyday liquids besides water are mineral oil and gasoline. There are also mixtures such as milk, blood, and a wide variety of aqueous solutions such as household bleach. Only six elements are liquid at or near room temperature and pressure: bromine, mercury, francium, cesium, gallium and rubidium.[1] In terms of planetary habitability, liquid water is essential for the existence of life.

Quantities of liquids are commonly measured in units of volume. These include the liter, not an SI unit, and the cubic meter (m³) which is an SI unit.