Cesium (also spelled caesium, chemical symbol Cs, atomic number 55) is a member of the group of chemical elements known as alkali metals. Soft and silvery gold in color, it is one of a handful of metals that liquefy near room temperature. It is the most alkaline of the stable elements, reacting explosively with water to produce the alkali cesium hydroxide, which can corrode glass. Its atoms readily lose electrons to produce ions, and this property makes cesium useful for photoelectric cells. Cesium is a catalyst for certain reactions in organic chemistry.

This element has many isotopes, of which the single stable isotope (cesium-133) has become the primary standard for measuring seconds of time and is therefore the basis of atomic clocks. Some of its radioactive isotopes are used to treat certain types of cancer, and cesium-134 helps measure cesium output by the nuclear power industry. Cesium-137 is commonly used in industry for such applications as moisture density gauges, leveling gauges, and thickness gauges. Cesium compounds are mildly toxic.

Cesium was discovered by Robert Bunsen and Gustav Kirchhoff in 1860, when they analyzed the spectrum of mineral water obtained from Dürkheim, Germany. They held a drop of the water in a flame and observed the spectral lines of several elements. Among these lines they observed two blue lines that did not come from any of the known elements. They concluded that the blue lines were produced by a hitherto unknown element, which they named cesium (from the Latin word caesius, meaning "sky blue" or "heavenly blue"). Thus cesium became the first element discovered by spectral analysis. Bunsen isolated cesium salts from the spring water, and the metal itself was isolated in 1881 by Carl Setterberg, who worked in Bunsen's laboratory. 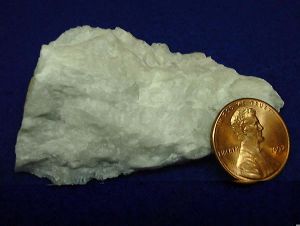 Cesium occurs in several minerals, particularly lepidolite and pollucite (a hydrated silicate of aluminum and cesium). One of the world's most significant and rich sources of this metal is located at Bernic Lake in Manitoba. The deposits there are estimated to contain 300,000 metric tons of pollucite, at an average of 20 percent cesium.

Metallic cesium can be isolated by the electrolysis of fused (molten) cesium cyanide, as well as in several other ways. Exceptionally pure, gas-free cesium can be made by decomposing cesium azide with heat.

As an alkali metal, cesium is part of group one of the periodic table, between rubidium and francium. Also, it lies in period six, just before barium. This silvery gold metal is soft and ductile (it can be readily drawn into wires).

As noted above, the spectrum of cesium has two bright lines in the blue part of the electromagnetic spectrum. In addition, its spectrum has several other lines in the red, yellow, and green regions.

Along with gallium, francium, and mercury, cesium is among the few metals that are liquid at or near room temperature. Its melting point is 28.44°C.

Cesium reacts explosively when it comes in contact with water (even cold water), and also reacts with ice at temperatures above −116°C. The reaction with water produces cesium hydroxide (CsOH), an extremely strong chemical base that will rapidly etch the surface of glass. In addition cesium reacts violently with chlorine gas to produce cesium chloride (CsCl).

Cesium has at least 39 known isotopes, which is more than any other element except francium. The atomic masses of these isotopes range from 112 to 151. Yet it has only one naturally occurring stable isotope: 133Cs. Most of the other isotopes (except for those noted in the table) have half-lives from a few days to fractions of a second.

Since 1967, the International System of Units (SI units) has defined the second based on oscillations between two energy levels of the cesium-133 atom. Thus the cesium oscillator has become the primary standard for time and frequency measurements.

The isotope 137Cs, with a half-life of 30.17 years, has been used in hydrologic studies, analogous to the use of tritium (3H). It decomposes to barium-137 (a short-lived product of decay), then to a form of nonradioactive barium.

Cesium-137 is produced during the detonation of nuclear weapons and in nuclear power plants. It was a notable product during the 1986 Chernobyl meltdown. Beginning in 1945, with the commencement of nuclear testing, 137Cs has been released into the atmosphere, where it is absorbed by moisture and returned to the Earth's surface as a component of radioactive fallout. Once 137Cs enters groundwater, it is deposited on soil surfaces and removed from the landscape primarily by particle transport.

Cesium chloride: Cesium chloride (CsCl) is an ionic compound. It can be prepared by the reaction of cesium hydroxide or cesium carbonate with hydrochloric acid. The resulting cesium chloride salt is purified by recrystallization. The crystalline structure of this salt is composed of interlocking simple cubic lattices of anions and cations.

This compound is not usually used in experiments, because the extraction of cesium is very expensive and it behaves very much like rubidium hydroxide and potassium hydroxide.

All cesium compounds should be regarded as mildly toxic, because of its chemical similarity to potassium. Contact with large amounts can cause hyperirritability and spasms. On the other hand, such amounts would not ordinarily be encountered in nature, so cesium is not a major chemical environmental pollutant. Rats fed with cesium in place of potassium in their diet were found to die, so this element cannot replace potassium in function.

The isotopes 134Cs and 137Cs (present in the biosphere in small amounts as a result of radiation leaks) represent a radioactivity burden that varies depending on location. Radioactive cesium does not accumulate in the body as effectively as many other fission products, such as radioactive iodine or strontium.