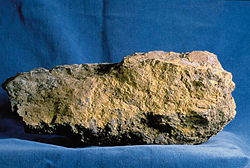 In the case of radioactive decay, each different radioactive isotope has a particular half-life that is unaffected by changes in the physical or chemical conditions of the surroundings. This property is the basis for radiometric dating of rocks and fossils. In pharmacology, the half-life of a drug (in a biological system) is the time it takes for the drug to lose half its pharmacologic activity.

The table at right shows the reduction of the quantity in terms of the number of half-lives elapsed.

It can be shown that, for exponential decay, the half-life

In addition, the half-life is related to the mean lifetime τ by the following relation:

can represent various specific physical quantities, depending on the process being described.

The half-life of a process can be readily determined by experiment. Some methods do not require advance knowledge of the law governing the decay rate, whether it follows an exponential or other pattern of decay.

Most appropriate to validate the concept of half-life for radioactive decay, in particular when dealing with a small number of atoms, is to perform experiments and correct computer simulations. Validation of physics-math models consists of comparing the model's behavior with experimental observations of real physical systems or valid simulations (physical and/or computer simulations).[2]

Decay by two or more processes

Some quantities decay by two processes simultaneously. In a manner similar to that mentioned above, one can calculate the new total half-life (

that is, half their harmonic mean.

. (This convention suggests a decaying number of discrete items, an interpretation that is valid in many, but not all, cases of exponential decay.) If the quantity is denoted by the symbol

is given by the formula:

is the initial value of

, the exponential is equal to 1, and

approaches infinity, the exponential approaches zero. In particular, there is a time

Substituting into the formula above, we have