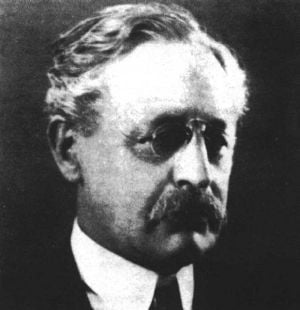 Sir Halford John Mackinder (February 15, 1861 – March 6, 1947), was an English geographer and politician. He was knighted for his work in 1920. Mackinder was instrumental in establishing geography as a unified and recognized academic discipline. He is famous for his geopolitical conception of the globe as divided into two parts—the superior Eurasian “heartland” and the inferior rest of the world. Mackinder warned that whoever controlled the "heartland" would control the world, and proposed that an Atlantic community be formed to maintain balance. Unfortunately, his ideas were adopted by Karl Haushofer and influenced Germany's efforts at world domination. Many aspects of his theories have been proved inaccurate, yet his efforts to understand the conflicts and shifts in power across the world laid a foundation for continued geopolitical studies. A deeper understanding of international relations requires consideration of all factors pertinent to human life, taking into account historical, social, and spiritual aspects, as well as the physical, geographic nature of each nation.

Halford John Mackinder was born in Gainsborough, Lincolnshire, England, the eldest son of Draper and Fanny Anne Hewitt Mackinder, both of Scottish descent. He was educated at Queen Elizabeth's Grammar School, Gainsborough (now Queen Elizabeth's High School), after which he attended Christ Church at Oxford, specializing in biology. He received the highest honors in his class in 1883, and continued on to study modern history. His interest gradually shifted toward geography, which at the time was not regarded as a single science, but was divided into physical and human geography.

After graduating from the University of Oxford, he went on to apply for the bar studying law in the Inner Temple. He became a barrister in 1886.

In 1887, Mackinder was appointed reader in geography at the University of Oxford, then by far the most senior position for a British geographer. He advocated that physical and human geography should be treated as a single discipline, and by 1899, he had drawn together a single school—the Oxford School of Geography. Mackinder became the first president of the school. In 1899, Mackinder led an expedition to East Africa and climbed Mount Kenya.

Mackinder was a member of the Coefficients Dining Club of social reformers set up in 1902 by the Fabian campaigners Sidney and Beatrice Webb. He joined the London School of Economics (LSE) on its foundation in 1895, and remained on the staff as reader and professor until 1925. He served as director of the school from 1903 to 1908.

Mackinder stayed at Oxford until 1904, when he accepted the position of the director of the London School of Economics. He then dedicated his energies completely to the administration and the leadership of the school. During that time however, he continued his connection with geography, teaching classes in economic geography.

In 1910, Mackinder resigned his position at LSE to enter politics. He became a member of the Parliament in 1910, as a Unionist Party member for the Camlachie division of Glasgow. He was a strong supporter of British imperialistic policies. He retained his seat in parliament until he was defeated in the 1922 election.

In 1919, Mackinder was sent as British high commissioner to southern Russia, to try to unify White Russian forces against communists. Upon his return to Britain in 1920, he was knighted.

In 1902, Halford Mackinder published his famous Britain and The British Seas, which included the first comprehensive geomorphology of Great Britain. This work, together with his 1904 paper “The Geographical Pivot of History” formulated the "Heartland Theory," which is often considered as the founding moment of geopolitics as a field of study (although Mackinder did not use the term). While the Heartland Theory initially received little attention outside geography, this theory would influence the foreign policies of world powers for decades.

Mackinder argued that interior Asia and Eastern Europe (the heartland) had strategic importance for the world. As the sea power declined in the twentieth century, marking the end of the "Columbian epoch," the mainland and land power become the strategic center of the “World Island” (by “World Island,” he meant the Euro-Asian-African landmass). He believed that the railroads paved the way for that change. That is why he believed that the inner areas of the Eurasian continent, which were in the “heart” of the world, with easy accessibility to all the other regions of the world, would have special geostrategic importance in the twentieth century.

The Heartland theory hypothesized the possibility for a huge empire to be brought into existence in the Heartland, which would not need to use coastal or transoceanic transport to supply its military industrial complex, and that this empire could not be defeated by all the rest of the world coalitioned against it. Comparing countries to cogs in a machine, he theorized that the Heartland was the largest cog, and countries surrounding it were the smaller cogs that moved as it moved. Mackinder emphasized the role of Britain and the United States to preserve a balance between the powers trying to control the heartland.

Mackinder’s next major work was in 1919—Democratic Ideals and Reality—which was a perspective on the 1904 work in the light of peace treaties of World War I and Woodrow Wilson's idealism. This work contains his most famous quote:

This message was composed for world statesmen at the Treaty of Versailles. Mackinder emphasized the need for long-lasting peace, trying to find the way to ensure geostrategic stability in Europe. He emphasized East Europe as the strategic route to the Heartland and proposed establishing a strip of buffer states to separate Germany and Russia. However, these buffers proved to be ineffective bulwarks in 1939.

The Heartland Theory was enthusiastically taken up by the German school of Geopolitik, in particular by its main proponent Karl Haushofer. Whilst Geopolitik was later embraced by the German Nazi regime in the 1930s, Mackinder was always extremely critical of the German exploitation of his ideas.

Mackinder was a convinced anti-Bolshevik. The principal concern of his work was to warn of the possibility of another major war—between Germany and communist Russia. Mackinder’s ideas were in many ways prophetic, predicting that the chaos in a defeated Germany would lead to dictatorship. He also elaborated on the concept of “one world,” and the need for establishment of regional powers. He proposed the theory of the Atlantic community, which became a reality after World War II with the establishment of the North Atlantic Treaty Organization (NATO).

Mackinder's work paved the way for the establishment of geography as a distinct discipline in the United Kingdom. The University of Oxford would not appoint a chair until 1934, but the University of Liverpool and University of Wales both did so in 1917. Mackinder was given a personal chair at the London School of Economics in 1923. His role in fostering the teaching of geography is probably greater than that of any single British geographer.

Mackinder's work in establishing the field now known as geopolitics is also significant. Although he did not himself use the term, his analysis of the connection between geography and political power in the world was foundational. He is also credited with introducing the concept of the "heartland"—the central landmass of the world—and the distinction between the land powers and the sea powers, which he saw as in recurring conflict throughout world history.

His doctrine was influential during the World Wars and the Cold War, as Germany and later Russia each attempted to seize and fortify the Heartland, attempts Mackinder had anticipated and about which he had given warnings. His theory was discredited, however, when Hitler's efforts failed and when the Soviet empire, which occupied the Heartland, dissolved into separate republics amid economic chaos and rebellion.

Retrieved from https://www.newworldencyclopedia.org/p/index.php?title=Halford_Mackinder&oldid=1063496
Categories:
Hidden category:
This page was last edited on 23 January 2022, at 18:25.
Content is available under Creative Commons Attribution/Share-Alike License; additional terms may apply. See Terms of Use for details.